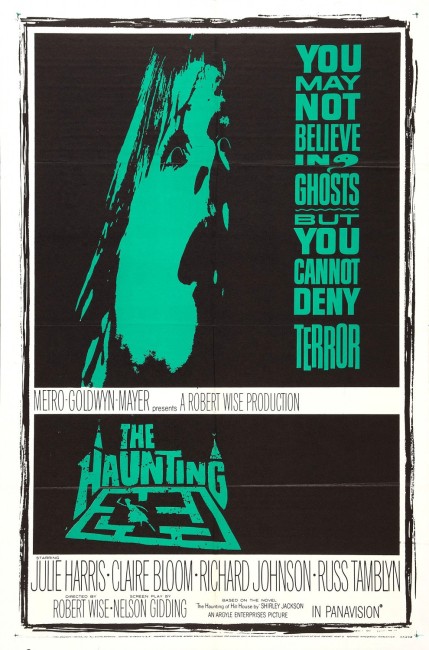 Anthropologist John Markway takes a lease on the notoriously haunted Hill House. He assembles a team to document the phenomena that consists of the clairvoyant Theodora; Eleanor Lance, who experienced powerful poltergeist phenomena as a child; and the house’s cynical heir Luke Sanderson. For the timid Eleanor, joining the team is an opportunity to escape a stifling life of conservatism. However, once they are there the spirits that haunt the house begin a mind-numbing assault on the group.

I first saw The Haunting in my early teens and it made an indelible impression on me. Its psychological horrors had a unique and vivid impact that have lasted long in the memory as the model of what all good horror should be. The Haunting is in my consideration the finest of all horror films.

Robert Wise served his apprenticeship under the great producer Val Lewton, first as an editor and then directing two of Lewton’s classic psychological horror films – The Curse of the Cat People (1944) and The Body Snatcher (1945), plus the non-genre Mademoiselle Fifi (1944). Lewton always preferred unseen terrors that lived in an ambiguity between whether they were real or psychological rather than overt monsters. Studying under Lewton clearly influenced Wise – all of Wise’s subsequent horror films could be said to be Lewtonian films. The Haunting, when one thinks about it, is the ultimate Lewtonian film. The Lewton influence similarly also rears its head in Robert Wise’s reincarnation film Audrey Rose (1977).

The shocks that Robert Wise crafts in The Haunting are some of the most sophisticated and finely constructed ever placed on film. Like the best of Lewton, all ghosts in The Haunting take place entirely by suggestion – the cold spots and the phantom dogs are only mentioned by other people but never seen, the doors that close of their own free will only do so when the camera is not looking. One of the moments that stays vividly in memory is the scene where Julie Harris lies in bed at night, terrified by the noises outside in the hallway and holds onto what she thinks is Claire Bloom’s hand, only to find in the morning that Bloom was in the neighbouring room the entire night not with her, whereupon comes the spooky realisation: “Oh my God, whose hand was I holding?”

The classic scene that everybody remembers is the one where the four huddle in the dining room as an unseen presence thunders up the hallway outside in huge booming footsteps that gradually come nearer. The doorway to the dining room strains under the strain of its pummelling, even bending in, before the presence departs. It is a terrifying assault, all the more so for us being given no glimpse of what is on the other side of the door. Robert Wise chose to shoot The Haunting in black-and-white at a time when black-and-white film stock was almost entirely a thing of the past and it is an artistic choice that only serves to heighten the atmosphere.

A considerable amount of The Haunting‘s effectiveness rests in the subtle character interplay. Much is only apparent upon a second viewing like the dramas and interplay going on between the various characters – Eleanor’s adolescent crush on Markway, Theodora’s understated lesbianism. (The lesbianism aspect has led to an intriguing controversy surrounding the film. The Aurum Film Encyclopedia: Horror (1986) slammed the film for what it concluded was overt homophobia – based on one scene where Julie Harris reacts in revulsion, saying she doesn’t like Claire Bloom’s ‘type’ – blowing the entire almost never stated aspect of the film (and what is after all only one character’s reaction) into the entire reason for dismissing it, while other commentators have seen the characterisation as an early coded championing of LGBT rights).

All four principals etch strong characterisations. Richard Johnson notably gives a performance of strong, confident assurance. In particular, Julie Harris’s performance as a frightened, introverted woman venturing out into the world for the first time is conducted with a great deal of conviction.

Though the film retains Shirley Jackson’s New England setting, Robert Wise shot in England and Hill House is played by Ettington Park house (which is nowadays run as a hotel) in Stratford-on-Avon (the birthplace of Shakespeare). Wise shot the exteriors using infra-red film to create more stark emphasis.

The film is based on The Haunting of Hill House (1959), a classic novel by Shirley Jackson (1919-65), a writer of horror, mystery and macabre tales. Jackson’s works have also been adapted into the split personality film Lizzie (1957) and the Gothic mystery We Have Always Lived in the Castle (2018). The only other film adapted from her works to enter into genre territory was the tv movie The Lottery (1996) based on her classic short story set in a town where people are stoned to death after being chosen in a lottery. Shirley (2020) was a biopic based on Jackson’s troubled life.