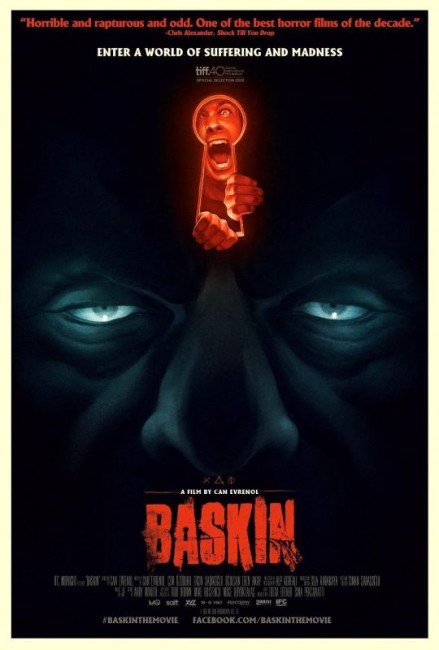 A detachment of police are sent to the Inceagac neighbourhood, which has a dangerous reputation. As they arrive, they hit a figure on the road, causing the van to crash into the river. Emerging, the group make their way to a nearby house, a former police station, to investigate. Instead they find they have walked into a hellish den, filled with writhing tortured bodies, all lorded over by a dwarf magister who demands that they be sacrificed.

Baskin was only the eighth Turkish film to ever be released in the US. It was a feature-length directorial debut for Can Evrenol, a horror fan who had made a number of short films prior to this. Evrenol has previously developed a short film version of this with the eleven-minute Baskin (2013), which also features Gorkem Kasal and Muharrem Bayrak. The full-length Baskin premiered at the Toronto Film Festival and gained reasonable festival exposure.

Turkey is not exactly the country you expect to make balls to the walls horror. Effectively known as the country that presents a bridge between Islam and the West, it is also ruled by an increasingly authoritarian government that in recent years has instituted much in the way of censorship and media crackdown. If Baskin is anything to go by, it suggests there is something seriously fucked up going on beneath all of this.

You are never sure what way the film is heading. The opening scenes with the cops talking seem like wannabe Tarantino, although what most English-speaking audiences are not likely to get in this is how the idea of men talking frankly about sex is something that pushes Baskin well into a taboo area for a Turkish film. We follow the police officers on their call-out, which goes wrong as they hit someone on the road and crash their van into the river. Things get very strange after that point. There are flashbacks to scenes of Gorkem Kasal talking to his captain Ergun Kuyucu, which keep getting surreally interrupted, leading to one striking image of Kasal sinking underwater until a giant pair of hands reach down to rescue him.

Somewhat like Kill List (2011), the film then does a very weird dogleg turn and sends the police officers into a building that seems to be the headquarters for a group of Devil worshippers (it is never exactly explained what is going on). As they descend through the building, it appears to be a charnel house filled with corpses, strewn body parts and people imprisoned and being tortured in different ways. The place appears to be inhabited by sub-human things that worship at an altar. Indeed, it looks for all the world like the characters are making their way through the world of a horror videogame.

Things get even weirder with the introduction of the character listed on the credits as Baba/The Father, played by Mehmet Cerrahoglu, a dwarf actor with freakishly contorted features. Cerrahoglu talks in an unnervingly calm way as he inflicts a series of graphic tortures on the various officers – stomachs cut open and intestines torn out, knives in the eyeball. The latter half of the film starts to head into a disturbingly grim place.

On the other hand, there is the ending. [PLOT SPOILERS]. Quite what is going on here is of considerable confusion. It seems a combination of some kind of strange deathdream – see An Occurrence at Owl Creek Bridge (1961) and the great many copies that came after – and a timeloop where Gorkem Kasal emerges from the den only to become the person on the road that his co-workers in the van hit earlier, before being doomed to repeat everything all over again. The film has been intended as one of grim extremes but has little in the way of narrative rationality. It feels like Can Evrenol threw in a little bit of everything from his favourite films – the Saw sequels, Clive Barker, The Sixth Sense (1999) – resulting in something that is a hodgepodge of competing ideas and shock effects without much else holding it together.

Can Evrenol next made the English-language horror film Housewife (2017) about a woman becoming involved with a sinister cult and the post-apocalyptic film Girl With No Mouth (2019), plus the Haunted by Al Karisi, The Childbirth Djinn episode of the anthology The Field Guide to Evil (2018).