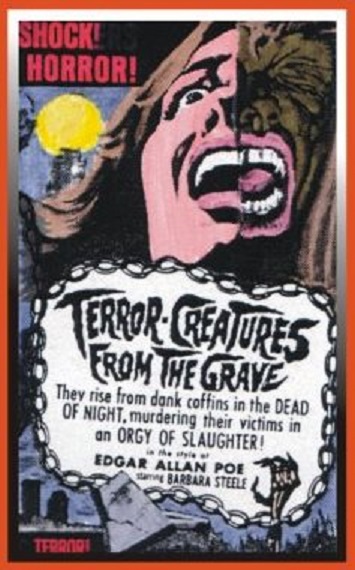 1911 in the town of Ratzen. Albert Kovac, associate of the notary Joseph Morgan, opens a letter addressed to Morgan asking him to come to the small town of Bregoville to write a will for Jeronimus Hauff. With Morgan away, Albert takes it upon himself to travel to Bregoville. There he meets Hauff’s wife Clio and daughter Corinne, only to be informed that Hauff died one year ago. As per the requirements of his will, they have gathered for a ceremony to move the body. Albert finds that Jeronimus’s death, which is officially listed as his falling down the stairs, occurred in suspicious circumstances. At the same time, the five people who were witness to his death are all being killed. When it is discovered that Jeronimus’s grave is empty, it is believed that he is seeking vengeance from beyond the grave.

In the 1960s, Italy produced an extraordinary series of Gothic films. The genre was begun with I Vampiri (1957) but was popularised by the international success of Mario Bava’s Black Sunday (1960). These were building on the horror revival begun by Hammer Films and Roger Corman’s Edgar Allan Poe adaptations but quickly created their own unique and distinctive style. Most of the Italian Gothic films took place in 19th Century settings in big old houses and castles. Unlike Hammer Films and Corman, the Italians liked to shoot in black-and-white, which offered stark contrasts of shadow and much in the way of moody atmosphere. Unlike Hammer, the Italian Gothic also frequently ventured into ghosts stories.

Following her breakout role as the witch in Black Sunday, British actress Barbara Steele became the undisputed queen of Italian Gothic cinema. Her eerie and wide-eyed beauty had her cast as a femme fatale, a woman tormented by a mad husband or haunted/possessed by an ancestor. She appeared in several films of the Italian Gothic cycle with The Terror of Dr Hichcock (1962), The Spectre/The Ghost (1963), Castle of Blood/The Long Night of Terror (1964), The Long Hair of Death (1964), Nightmare Castle/The Faceless Monster (1965), Revenge of the Blood Beast/The She-Beast (1965) and An Angel for Satan (1966), as well as ventured to the US to appear in one Roger Corman Poe film with Pit and the Pendulum (1961). These roles made her into a cult figure.

Terror-Creatures from the Grave – the actual Italian title translates as Five Graves for a Medium – is one of the films that sought to exploit Steele’s name. Director Massimo Pupillo does a fine job of creating Gothic atmosphere – the peasant woman who crosses herself and spits when Walter Brandt stops to ask directions to the house; Brandt approaching the door and finding the knocker makes no sound; the house with cabinets of skulls and drawers of mummified hands; the mention of the late husband’s name whereupon the lights go out and the main door of the house blows open. Or scenes of the empty grounds of the house with plants dying in the brackish water of the fountain, single lights suddenly going on in the huge house behind. The film was shot at the Castel Fusano park near Rome – the black-and-white photography makes the house situated in the midst of a bare open park, the nearby marshes, wide-angle shots of the horse and buggy riding across the estate look superbly empty and barren.

On the other hand, beyond its establishing atmosphere, Terror-Creatures from the Grave is slow paced. There are some occasionally mysterious happenings, one or two deaths (most of which have happened before the timeframe of the story) but not anything that grips you to it. There is no urgency to the story – no sense that the characters are fighting against something, trying to solve a mystery or stop some plot or unknown force.

The film even criminally wastes Barbara Steele. In the other abovementioned works, she was cast as witches, mad women and doomed loves and the films play upon her wide-eyed, pre-Raphaelite beauty. Here she gets no more than a filler role as the dead man’s widow. Indeed, in the role of the dead man’s daughter/love interest, Mirella Marvidi even gets more prominence in the plot than Steele is afforded. The film reaches a rather desultory end where the husband obtains retribution from beyond the grave on those responsible for murdering him.

Director Massimo Pupillo only made a handful of films, including two other horror works with the Gothic horror Bloody Pit of Horror (1965) and the less well known Lady Morgan’s Vengeance (1965), as well as one of the original Django Spaghetti Westerns Django Kills Softly (1967). With ‘Terror-Creatures from the Grave, Pupillo was purportedly dissatisfied with the results and the fact that Barbara Steele proved difficult to work with. He allowed Ralph Zucker, the American producer who worked on several Italian films during this period, to take credit, even though Zucker was never behind the camera for any of the film.