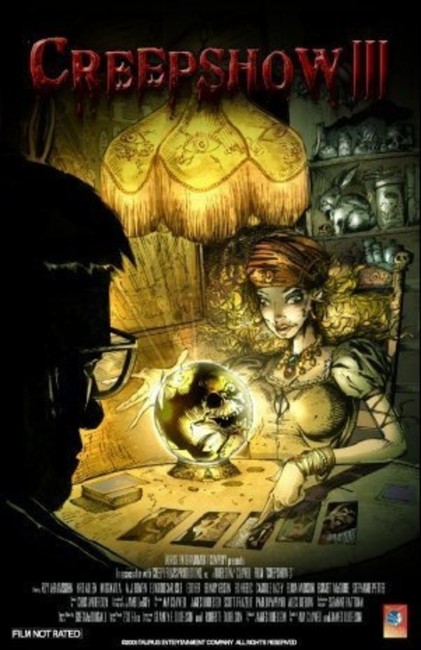 Alice:- Alice Jacobs, an obnoxious teenager, hates life in the suburb of Creepville, California. As her father tries out a new tv remote, Alice is abruptly propelled through scenarios where she is the member of Black and Latino families and then has hideous sores all over her body. The Radio:- Jerry Collins works security and lives in a rundown apartment building. He procures a battered old radio from a homeless peddler on the street and is then startled when the radio begins talking to him. The radio starts giving him tips, including telling him where he can find quarter of a million dollars in cash. Next, the radio starts suggesting that Jerry kill people who become suspicious of his secret. Call Girl:- Rachael works as a call girl but is also a serial killer responsible for a spate of killings. Victor calls her to come to his house while his parents are supposedly away. As she prepares to kill him, she is unaware that Victor has killed the family that live in the house. The Professor’s Wife:- Professor Emmett Dayton has been engaged in a secretive research project at the university for twenty years. He suddenly announces that he is going to get married. Two of his former students John and Charles arrive at his house for the wedding party and meet the bride, the gorgeous Russian girl Kathy. As they talk to her, they suspect that Dayton might have completed his secret project and built a lifelike android. Haunted Dog:- The disgraced Dr Farwell is performing court-mandated community service at a free clinic in the poor area of town. Farwell is a pill-popping jerk who is contemptuous and frequently insulting to his patients. He is then followed everywhere by the ghost of a derelict.

Creepshow (1982), a collaboration between director George Romero and Stephen King, was one of the horror classics of the 1980s, a work that readily homaged the classic EC Comics of the 1950s with its black humour, punning narrator and just desserts endings, while the cinematic frame was even made to resemble the look of the comic-book panels. This produced a sequel with the disappointing Creepshow II (1987) where Romero wrote the script but turned directing duties over to his former cinematographer Michael Gornick. A remake of the original was announced during the 00s and eventually emerged as the tv series Creepshow (2019- ).

Somewhere amidst this, the directing-writing duo of James Dudelson and Ana Clavell managed to get sufficiently close to George Romero to persuade him to sign over the sequel rights to two of his films – Day of the Dead (1985) and Creepshow. The duo had previously made a handful of cheap horror films with Morella (1997), Horror 101 (2000), Horror 102: Endgame (2004) and Museum of the Dead (2004). They then proceeded to make Day of the Dead 2: Contagium (2005), which has been called one of the worst zombie films ever made (although is not entirely without interest), and Creepshow III here, which for a time lurked on the IMDB’s 250 Worst Films list. Dudelson and Clavell have not made any films subsequent to Creepshow III. None of the names in the cast are any that one has heard from before or since.

You can a massive sinking feeling about Creepshow III from the opening scene, which starts in on an animated depiction of the neighbourhood that is so badly drawn it looks like an animatic by kindergarten-age children. It should also be pointed out that Creepshow III abandons the other two Creepshow films’ use of the Creeper quasi-narrator figure or the idea that what we are watching are stories in a comic-book.

One of the more interesting things that Creepshow III tries is that is links all of the stories together, having characters from one segment turn up in different episodes and it seen that all the characters live in the same neighbourhood where aspects of each of the stories overlap – Stephanie Pettee stumbles into the plans for professor’s wedding, the two students encounter Camille Lacey on the way to Victor’s house and so on. The credits note that the film was shot on the Universal Studios backlot and one suspects part of the reason for the overlapping stories is that it cannily allows Dudelson and Clavell to get away with confining all the exteriors to one neighbourhood cul-de-sac and a dressed-down area of tenement ghetto.

The first segment, Alice, is probably the worst. Most anthology tales conform to either a just desserts morality where the wicked, greedy and those who assume to rise above their station are punished, or tell stories with a barbed sting in the tale. Alice does none of these. It initially reminds somewhat of the John Landis episode of Twilight Zone – The Movie (1983), which had racist Vic Morrow propelled through various eras of history as a persecuted minority where here spoilt teenager Stephanie Pettee finds herself propelled through alternate scenarios where she is living with first a Black family then an Hispanic family who all repeat the same lines to her. One is not sure if the episode is trying to make some point about racial attitudes here or what. The episode then takes a turn for the incomprehensible where Stephanie Pettee returns to her white family but finds herself oozing with open wounds and bodies parts falling off, before she is turned into a rabbit by neighbourhood professor Emmett McGuire. Quite what is going on in this episode is an utterly baffling scratch of the head.

With expectations in the gutter at this point, the second episode, The Radio, contrarily turns out to be the best in the film. The central idea of the poor schmuck (A.J. Bowen) who gets a radio that starts talking to him and giving advice on how to get ahead, before pushing everything over into murder is a good one. Dudelson and Clavell do a good job of following A.J. Bowen into disturbed headspace, leaving us unsure where the episode is going. The segment arrives at a modestly effective ending.

The third episode, Call Girl, has the advantage of Camille Lacey going for broke as the serial-killing call girl and giving a strutting performance that lights the show up. The segment throws some unusual twists on expectation where Camille Lacey enters the house to meet shy teenager Ryan Carty and passes on to the bedroom not seeing the bodies of the family that live there strung up to one side in the living room. The bedroom scene plays out in a moderately kinky way with him blindfolded and tied to the bed and we not sure who is going to be seducing or killing whom. The segment however is ultimately only hooked around its punchline involving the turning of the tables. Ryan Carty’s transformation into a monster looks only like he is wearing a costume store Halloween mask.

The fourth episode, The Professor’s Wife, is another that plays out solely in terms of its punchline – one that you can easily see coming well in advance. Films that require characters to act like total morons always irritate the hell out of me – in this case, the ridiculous idea that the two students would tear a woman’s body to pieces thinking she is an android and not realise until after the room was drenched in gore and they had body parts everywhere that she was human all along. The episode plays out with a tone of crude farce, while Bo Kresic’s supposed Russian fiancee is played as though a bimbo with a single brain cell who is trying to affect a bad Swedish accent.

The fifth episode Haunted Dog is also one of the more watchable. This is entirely due to the highly entertaining performance from Kris Allen who has a field day playing up the role of the cynically indifferent pill-popping doctor. Indeed, the segment gives itself over entirely to Kris Allen’s performance and a series of amusing montage scenes with him treating various patients either with indifference or total inappropriateness. Outside of that, the supernatural just desserts element and punchline of the episode is weak.