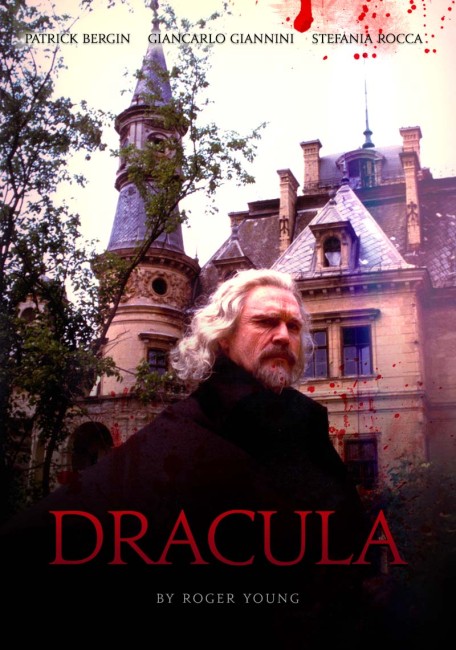 Budapest, the present day. Attorney Jonathan Harker proposes to his girlfriend Mina Murray. He is then approached by a nephew of Count Vladimir Tepes who invites him to Rumania to meet his uncle and conduct an illicit sale of his antiquities so that Tepes can buy Carfax House in Budapest. Jonathan is dubious about the deal but is tempted by the offer of a substantial commission. He drives to the Count’s castle in Rumania. Once there however, he is made a prisoner by the Count, although eventually makes an escape. Meanwhile, the Count travels to Budapest and appears at the window of Mina’s friend Lucy Westenra and drinks her blood. As Lucy dies but then returns to life, Jonathan and his friends are forced to confront the reality, as determined by the psychiatrist Professor Valenti, that the Count is a vampire and that he is the great historical evil that was nicknamed Dracula.

This Italian-made tv movie is an interesting variation on the oft-filmed Bram Stoker novel Dracula (1897). In this case, the film offers up a modernisation of the story. While there have been a variety of films that have transplanted the character of Dracula into the modern day – The Return of Dracula (1958), Hammer’s Dracula A.D. 1972 (1972) and The Satanic Rites of Dracula (1973), Love at First Bite (1979), Die Hard Dracula (1998), and Dracula 2000 (2000) and sequels – there have been no films before that have ever attempted to adapt the Bram Stoker novel itself into modern day surroundings.

Here we have a Dracula transplanted from Bram Stoker’s contemporary setting of fin du siecle Victorian England, where all other filmed versions usually take place, to the borderless European Union of the post-millennium. This allows for some at times striking interpolations of familiar parts of the story. Jonathan Harker is no longer a conveyancing lawyer arranging a property deal but someone who heads to Transylvania tempted by a potentially lucrative East European black-market antiquities deal. Rather than being followed by a string of suitors, Lucy Westenra is made into a foxy modern woman who manages to keep a string of ex’s at arms length.

All manner of modern intrusions make sharp contrast – while at Castle Dracula, Jonathan contacts Mina by cellphone. The long preamble in the book where Jonathan travels to Castle Dracula by coach has been supplanted by Jonathan crossing through various European borders in the space of a day in his expensive red Ferrari, although the film does then manage to blend classical and modern interpolations by having him crash the Ferrari and be picked up by Dracula in his standard black coach and have to change into frockcoat and tails because his clothes have been left behind in the car.

The film follows the Bram Stoker original closely, incorporating many of the details of the novel that some of the period adaptations never bother with – a moustachioed Dracula, Dracula forced to act as his own servant. The film even manages to put in a Demeter scene, as well as the sequence where Dracula climbs a wall like a fly and the climactic scenes where Dracula is tracked via the hypnotised Mina. The ending is changed somewhat to have it be Mina who stakes Dracula (with a stake that she manages to hide somewhere inside a negligee), whereupon the film then goes out on a note of ambiguity that suggests that she may be infected.

While the film does an excellent job in updating Dracula to the midst of millennial New Europe, director Roger Young lets the show down considerably in the second half. Roger Young is an American-born tv director, mainly noted for a host of Italian-shot Biblical mini-series such as Joseph (1995), Moses (1996), Solomon (1997), Jesus (1999), St Paul (2000), Barabbas (2012) and The Red Tent (2014) and the odd genre outing such as A Knight in Camelot (1998), another modernisation of a classic story, and the excellent Hallmark mini-series Hercules (2005).

Alas, Roger Young’s very tv horizons let the possibilities for atmosphere in Dracula fall through his hands. Most of the classic scenes – Lucy’s seduction, the Demeter scenes, the blood transfusion, the climactic chase – feel handled entirely by the numbers. Further, the atmosphere is almost entirely ruined by some cheap CGI transformations of Dracula changing into wolves, rats and bats. Elsewhere, Roger Young mimics set-ups that have been used in just about every other Dracula movie – the sensual interpretation of the scene with Dracula’s wives has been borrowed directly from Francis Ford Coppola’s Bram Stoker’s Dracula (1992), while Patrick Bergin does numerous cliched poses in his cape.

The script also gets caught up in some pretentious natterings about choices between good and evil and about Jonathan being corrupted by his deal. Unfortunately, the deal is too ill defined in the script to make it clear exactly how Jonathan is losing his soul by doing so. The original Dracula was always a story rich with metaphors about repressed carnality erupting through into polite British society. Now the symbolic undertow of the story seems to be about making a choice against materialism with the film ending with a speech from Jonathan saying that has learned that good lies not in material prosperity but in making correct moral choices.

The performances are particularly uneven. Patrick Bergin makes for a highly disappointing Dracula. Patrick Bergin can be an excellent actor when he has the material and can do a great job of projecting the smooth charm that the role of a romantic Dracula embodies – see his exceptional performance in Sleeping With the Enemy (1991), for instance. For a time, while posing as Dracula’s relative, Bergin does exude some of this. Alas, once he becomes Dracula, Bergin’s performance turns hammy and theatrical. This is a considerable disappointment as Dracula is a signature role that an actor can sometimes use to shine – indeed, most of those actors who have essayed the role of Dracula have developed a cult following.

Hardy Krüger Jr makes for an impossibly handsome looking Jonathan Harker but at the same time has an incredible blandness and projects almost zero personality. Much better is Conrad Hornby who makes for an authoritative Arthur Holmwood. The acclaimed and award-winning actor Giancarlo Giannini is cast as the Van Helsing equivalent, yet for such a strong role that Van Helsing usually is and with such a name actor in the part, Giannini’s Van Helsing is of negligible importance in this version (and for some reason has been renamed Professor Valenti).