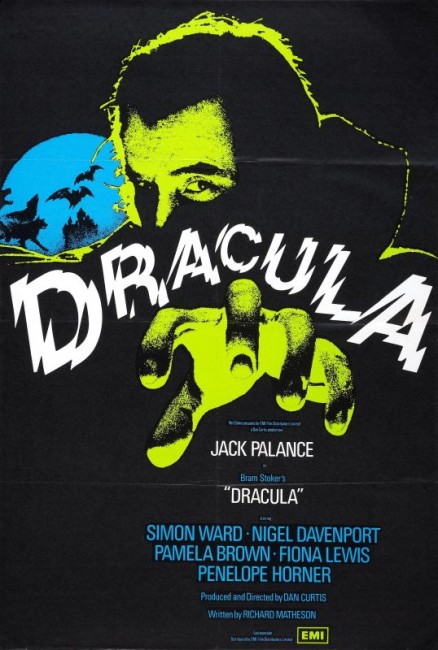 May, 1897. British real estate clerk Jonathan Harker travels to Transylvania to conduct the purchase of a property in Whitby for Count Dracula. However, Dracula is a vampire and allows Jonathan to be claimed by his three brides. Five weeks later Dr Van Helsing is called to Whitby to tend Jonathan’s fiancée Mina Murray and then Lucy Westenra as they fall inexplicably ill. Tracing the source of the illness brings Van Helsing up against Dracula. Dracula believes Lucy to be the reincarnation of his love and is determined to make her immortally his.

This version was made by Dan Curtis who had emerged as producer of the popular tv series Dark Shadows (1966-71) and the cult Night Stalker tv movies. Curtis debuted as director with the Dark Shadows cinematic spinoffs, House of Dark Shadows (1970) and Night of the Dark Shadows (1971). Curtis then embarked upon a series of classic horror stories remade for tv – including Dr Jekyll and Mr Hyde (1968), Frankenstein (1973), The Picture of Dorian Gray (1973), The Turn of the Screw (1974) and this. Dracula was released cinematically outside of America, the only of Dan Curtis’s tv movies to do so.

The script comes from respected genre novelist and screenwriter Richard Matheson, who has been responsible for works like The Incredible Shrinking Man (1957), Duel (1971), What Dreams May Come (1998), most of Roger Corman’s Edgar Allan Poe adaptations and the oft-filmed novel I Am Legend (1954). Richard Matheson treats the Bram Stoker story with the greatest degree of faithfulness that any adaptation had up to that point. The Transylvanian scenes are played almost entirely as Bram Stoker wrote them – all that is missing is the scene of Dracula climbing down the castle wall. The climactic pursuit back to Transylvania tracking Dracula via the hypnotised Lucy is also effectively introduced – the first film to do so. Richard Matheson does trim some aspects of the book – Renfield and the lunatic asylum have been dropped outright. So are the other vampire hunters, excepting for Arthur Holmwood.

The additions that Matheson makes are intriguing – this was the first adaptation of Stoker to directly equate Dracula with also being Vlad the Impaler, although Dracula had first been equated with Vlad in the previous Count Dracula’s Great Love (1972). (The end note that pops up to inform the audience that Vlad was an alchemist and sorcerer and “… so powerful a man was he that it was claimed he succeeded in overcoming even physical death. To this day it has yet to be disproven” is absolute tosh).

The attempts to create sympathy for Dracula during the flashbacks is also interesting, but these fail to work due to the briefness of the scenes and also because of the casting of Jack Palance. The climactic killing of Dracula, which owes much to the Hammer The Horror of Dracula, with Van Helsing ripping open the blinds of the library to pin Dracula in beams of light before he is impaled against an overturned table by a giant spear, is a highly effective improvement over the book’s climax.

At the same time, the film is also no good. It is certainly a well produced film – the production values seem like those of a feature film rather than a tv movie. What is noticeable is the naturalism of the production. Both the Universal and Hammer adaptations took place in artificial worlds that were almost entirely shot on soundstages. This version has a look of authenticity – its photography is naturalistic, the costumes in period without being ostentatious or florid, and the film appears to have been shot on the grounds of authentic castles and estates. It looks for all the world looks like a BBC costume drama.

On the other hand, while such an approach adds an enormous amount in the way of a plain straightforward adaptation of the story, it is resolutely un-fantastic in nature. All the supernatural elements have been pared away and those that remain are played as low key and unremarkable as possible. Here Dan Curtis makes the mistake of directing the film in terms of physical action – Dracula is not a supernatural presence, he merely sweeps into rooms and throws people about. Scenes that should have great impact – the attack of the brides, the blood-drinking – and so on are directed without flair or style and are almost nil in impact.

Even worse is the casting. It is certainly difficult to think of an actor less suited to the role of Dracula than Jack Palance – maybe Clint Eastwood or Arnold Schwarzenegger? Jack Palance is unable to shake the image of the old warhorse of countless westerns and makes his way through the role with characteristic asthmatic wheeze. The performance is appalling – the scenes where Palance tries to demonstrate anger by throwing things around in a room are so lacking in threat, so lacking in anything except hammy melodrama, that the entire plausibility of the film collapses.

The rest of the casting is not much better. Nigel Davenport’s Van Helsing lacks any sense of intellectual prowess or commanding power. He is no more than a plodding gentleman. There is a laughable scene that demonstrates just how wimpy this Van Helsing characterisation is – Davenport waves a cross at Dracula, who snarls “Throw it away”… whereupon Davenport does with only a slightly peeved “All right.”