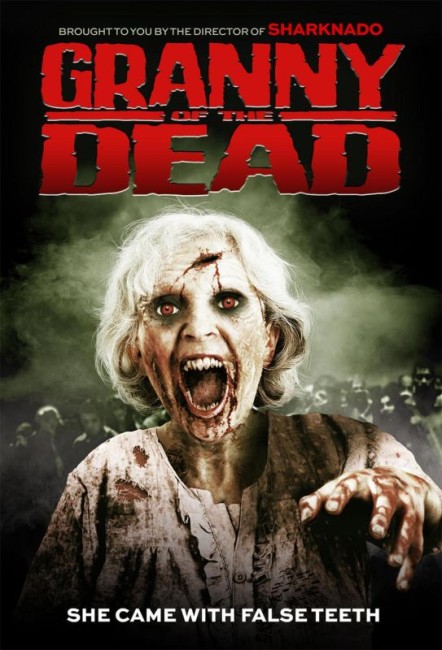 In a sleepy village in Wales, Ed wakes up one morning to find that the elderly have become flesh-eating zombies. Trapped inside his home, Ed tries to avoid his granny as she attempts to devour him. All around the town, his group of friends try to likewise fend off the elderly dead.

The title Granny of the Dead leads you to expect another gonzo zombie film. There is some amusement to the idea of geriatrics coming after the living. Indeed, the previous British film Cockneys vs Zombies (2012) featured similar scenes with geriatrics fighting off zombies. We get a suitable number of scenes throughout with Marcus Carroll having to fend off his undead granny and of geriatrics prowling around outside on their walking frames.

The surprise about Granny of the Dead is that, though it seats itself within the gonzo zombie genre by its very title, it is played seriously the entire way. Take away the title and one would have no more than a regular zombie film. There is nothing that approaches the wacky or even the slightly comedic or tongue-in-cheek. One kept waiting throughout but it never comes.

I get fairly tolerant towards low-budget zombie films given the number I have to watch for this site and learn to find nuggets anywhere I can but I have to admit that Granny of the Dead was a heavy slog to get through. Part of the problem was that director Tudley James adopts an unattractive visual style made up of lots of frenzied shakycam. This is interspersed with various tinted colour effects, the purpose of which I could never figure out. It makes for a film that is frenetically jumpy and annoying, something that fails to disguise the fact that the photography is not very good. There is one scene that could have worked with a better director where one of the survivors is in a car as a zombie crushes the front half of the vehicle with a bulldozer, leaving the driver having to back away inside a car with a smashed-in front.

The storyline also has a habit of jumping back and forward between characters (supposedly Marcus Carroll’s friends in assorted locations) but the drama never seems to move out beyond there. When the characters come together as an action team at the end and walk off in unison to kick zombie ass, never has a team-up felt so unearned with zero effort gone into engaging with any of its members.

Granny for the Dead was a solo directorial debut for Welsh director Tudley James who had previously made two Welsh-set crime films under the name Craig Tudor with Trackdown (2010) and as co-director of Down the Dark Road (2011).