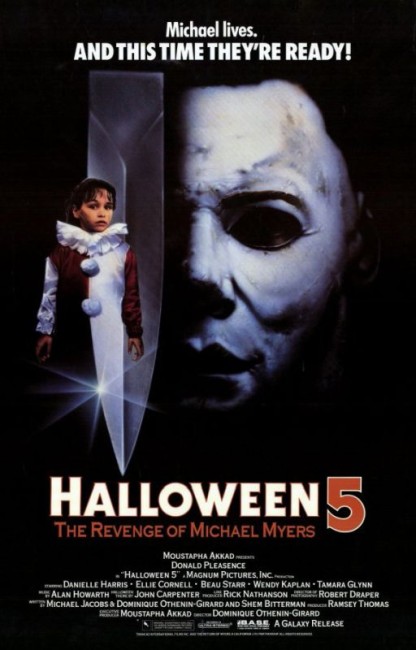 aka Halloween 5: The Revenge of Michael Myers

Michael Myers survives being shot by the sheriff’s department and recovers. One year later. Jamie Lloyd has been placed in a psychiatric institution after killing her adopted mother. She begins to have empathic flashes as Michael returns on Halloween night and proceeds to stalk and kill her stepsister Rachel and Rachel’s friends. The crazed Dr Loomis goes out on a limb, trying to use Jamie as bait to draw Michael to a trap at the old Myers house.

This was the fifth of the films that began with John Carpenter’s Halloween (1978). Carpenter disliked the idea of generating endless slasher sequels and attempted to take the series in different directions with Halloween III: Season of the Witch (1982), but this was not a success. Subsequently, Carpenter sold his interest in the series out to his executive producer Moustapha Akkad. Akkad and his Trancas International company continued the Michael Myers exploits with Halloween 4: The Return of Michael Myers (1988) and all the subsequent sequels. Halloween 5, sometimes subtitled The Revenge of Michael Myers, is a direct sequel to Halloween IV, both in terms of continuity and in retaining several of the cast members.

Halloween 5 came from Swiss director Dominique Othenin-Girard who briefly dallied with the horror genre after making the muddled disturbed twin film After Darkness (1985) and who would go onto the likes of the succubus film Night Angel/Deliver Us from Evil (1990) and Omen IV: The Awakening (1991). As Othenin-Girard’s work has demonstrated elsewhere, his style is rather crude. The film here comes with numerous clumsy red herring jumps – a pursuing figure only turning out to be a handyman, various jumps with people wearing Halloween masks popping up, and a silly scene where a guy puts on a Michael Myers mask and scares his girlfriend by pretending to be stabbing her.

There is also a scene copied direct from Friday the 13th Part 2 (1981) with a couple being pitchforked during the act of having sex. The scene brings out the crude puritanical morality that underlay Halloween (of teenagers being punished for having sex) with a much nastier undertow. There are other scenes like where Ellie Cornell is followed around the house in various states of undress – T-shirt and panties, taking a shower, changing into her clothes, running about in a towel – where clearly Dominique Othenin-Girard’s camera is taking the place of the stalking Michael Myers and it is unsure whether we are meant to be voyeuristically ogling the partially clad Ellie Cornell or being concerned for her life.

On the positive side, Dominique Othenin-Girard engages in much more of the eerie peripheral suspense that John Carpenter did in the original than any of the other sequels do. The tactics are certainly hackneyed, although there is one excellent sequence with Danielle Harris hanging on by her fingertips down a ventilation shaft as Michael stabs through the metal with a knife that more than favourably compares to Carpenter’s work in the original.

Donald Pleasence is back as Dr Loomis but this time the character has gone from verging on a crackpot to someone who has completely lost his marbles. How such a patently lunatic character can manage to still retain his license to practice psychology and has not been disbarred from the profession is one of the film’s major credibility gaps. The script here shows Loomis in a much more morally ambiguous light than any of the other films, with he actually placing Jamie’s life in danger in order to draw Michael out.

The script certainly tries to throw some new things into the stew. In a touch that may well have been borrowed from John Carpenter’s clairvoyance thriller script Eyes of Laura Mars (1978), Jamie has a psychic link to Michael’s mind and Loomis makes the interesting suggestion that she has the ability to ease Michael’s pain, even offer him redemption. However, this is an intriguing idea that is never explored any further. There is a fine scene where the two confront one another in the attic and Michael allows her to lift his mask and touch his face – something we are never allowed to see – whereupon she gives the enigmatic surprise exclamation: “You’re just like me.” However, the film is only interested in slasher tactics and this potentially interesting exploration of the redemption of Michael’s soul is thrown by the wayside.

The most frustrating thing about Halloween 5 though is the ending. Throughout we are introduced to a mystery character identified only by a series of shots focused on their snazzy boots who at the end appears responsible for Michael’s possibly supernatural rescue from the jail cell. Quite who this character is is never explained – possibly this was something that was intended for a further sequel. Alas, Trancas abandoned all interest in making any further Halloween films after this and the next entry Halloween: The Curse of Michael Myers (1995) was continued by a different company who clearly had no interest in clearing these matters up.