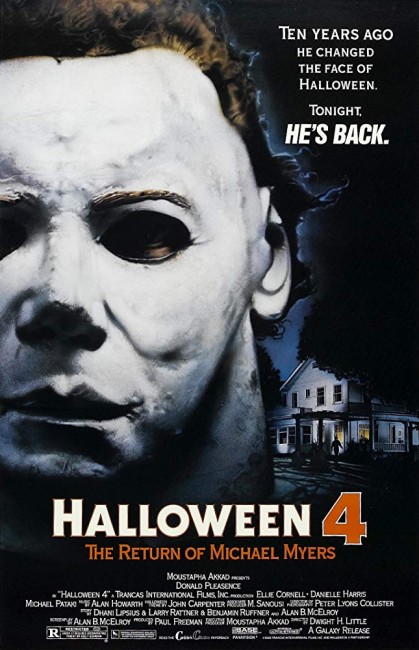 Michael Myers makes an escape while being transferred to another facility in an ambulance. He overhears the nurses mention that his only surviving next of kin is Laurie Strode’s seven year-old daughter back in Haddonfield. This is young Jamie Lloyd who has been fostered out to the Carruthers family. As Halloween night comes, Michael returns, stalking Jamie who has been left in the care of her teenage foster sister Rachel. Rachel is more caught up in a fight with her boyfriend than in caring about Jamie. Pursuing Michael is Dr Loomis who rounds up a posse of rednecks to take on Michael after he slaughters the town’s entire police force.

By the end of the 1980s, the horror genre had slipped into tiresome repetition. The Roman numerals piling up behind titles began to reach double figures, while even forgotten films like The Food of the Gods (1976), Alligator (1990), Xtro (1982) and Witchcraft (1988) were sequelized, sometimes multiply so. Irrespective of the fact that some of the sequels were occasionally decent items, it does represent a scarcity of originality. Even when originality did arrive, it seemed not so much a breath of fresh air as an injection in the arm to keep the grind mill still turning. It is no surprise that Halloween 4: The Return of Michael Myers is just another corpse on the growing pile that only makes the memories of the originals seem even better.

John Carpenter’s original Halloween (1978) had been a defining horror classic that gave birth to the tide of slasher films throughout the 1980s. Carpenter subsequently sold the rights to Dino De Laurentiis and oversaw one generally disappointing sequel Halloween II (1981). Carpenter saw beyond the mill of copycat sequels that the Friday the 13th series was generating and with the next film Halloween III: Season of the Witch (1988) attempted to use the Halloween as an umbrella title for a series of original films. Alas, Halloween III was not a success and De Laurentiis passed on making any further sequels. The rights then taken up by Jordanian businessman Moustapha Akkad, one of the key personnel at Trancas International, which produced the first film. Here Akkad did the commercially unimaginative thing here and returned the series to the exploits of Michael Myers. He would preside over five further Halloween sequels (see below).

One had hopes for Halloween 4: The Return of Michael Myers – it follows up the film that started off the Jason/Freddy/babysitter/summer camp slasher cycle and it has had an entire decade to learn from the mostly inferior imitators. Instead, all it has done is wielded the dross into unimaginative imitation. Sequences are stolen from other films – the gas station scene and the climactic killing of the Shape comes from The Hitcher (1986); the plot of the group trapped in the house with the power off from Alone in the Dark (1982); while the gory killings seem patterned more after the crude butchery of the Friday the 13th series than any of John Carpenter’s eerie suspense. Even the film’s best moment – the twist ending – has been borrowed directly from the opening scene of the original Halloween.

In every other respect, Halloween 4: The Return of Michael Myers is the same formula that has fuelled dozens of other slasher films – the same plot of teens being stalked, the nasty underlying fuck-and-die morality (there is an almost laughable scene that underlines the crude Freudian morality of the slasher film where Kathleen Kinmont gets impaled through the chest with a very phallic-looking shotgun).

It makes for sad comparison – in the original, John Carpenter evinced a creepy paranoia, he played games with the audience and popped the boogie man up where you least expected, and some of his images were so weird they blew the mind. When director Dwight H. Little tries to get intense here, he ends in blowing up everything in sight. Someone like John Carpenter could have made something out of a plot involving Dr Loomis raising an army of rednecks to hunt Michael and a town filled with people wearing lookalike Halloween masks identical to the killer. Carpenter’s eerie ‘da-dink-dink’ score from the original is reused at every opportunity and rapidly loses its effect. Donald Pleasence is back but completely overacts in the Loomis part.

Director Dwight H. Little later went onto direct mostly action films such as Marked for Death (1990), Rapid Fire (1992) and most successfully the Wesley Snipes thriller Murder at 1600 (1997), as well as Free Willy 2: The Adventure Home (1995). His other ventures into genre material have been the slasher remake of The Phantom of the Opera (1989), Anacondas: The Hunt for the Blood Orchid (2004) and the videogame adaptation Tekken (2010).