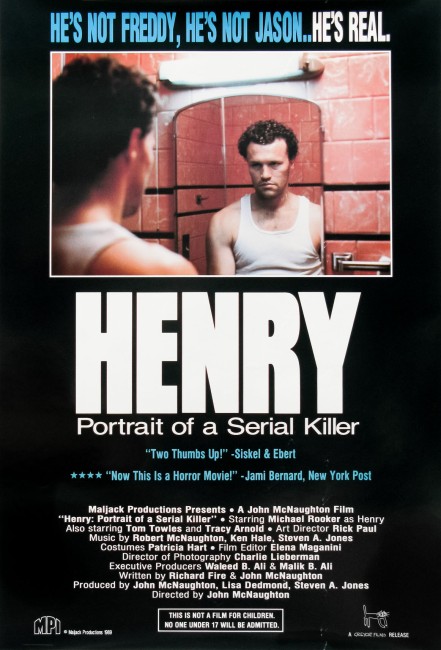 Chicago ex-con Otis has his sister Becky come to stay with him. Becky is drawn to Otis’s moody roommate Henry. Henry tells her how he killed his mother who would make him watch other men having sex with her. Otis is shocked when Henry casually snaps the neck of two women they pick up but soon comes to enjoy the thrill of killing and joins in Henry’s random murder spree.

Every few years along comes a film out of nowhere, made on a zero budget, that is so ferocious in the way it bites its teeth into society and all good sensibility that it sometimes turns the horror genre on its head – you could include the likes of Night of the Living Dead (1968), The Texas Chain Saw Massacre (1974), The Evil Dead (1981) and NEKRomantik (1987). Henry: Portrait of a Serial Killer did much the same in the late 1980s.

The other thing that accompanies these films is controversy – and Henry: Portrait of a Serial Killer has suffered that, having been banned in several countries and it being held up three years until 1989 before receiving a US release. This version (released on video in New Zealand in 1991 after being banned from film festival showings) is seen in truncated form, having been shorn of six minutes of running time, including the notorious scene where Henry and Otis blow away a kid. Even in lessened form, Henry: Portrait of a Serial Killer is still powerful viewing.

What makes Henry: Portrait of a Serial Killer so disturbing is its very ordinariness. John McNaughton does not dress his direction up in horror film trappings – suspense, stalking scenes, jumps out of the edge of the frame and the like. Instead, the camera seems to just blankly focus on the action, recording it as disinterestedly as it does say a car driving through the Chicago streets. The lead psycho is no Hannibal Lecter manipulating and scheming or a one-liner spouting camp villain – as the film’s advertising byline says, “He’s not Freddy, He’s not Jason, He’s real” – just an ordinary unemployed stiff. Instead of being set in a mansion or some variation on the old dark house, the majority of the film is set around a kitchen table in a dreary apartment and the result is in some ways even more scary.

The understated nonchalance of the film is disturbing. In the opening scenes, Michael Rooker is seen picking up a hitch-hiker who has a guitar and then a couple of scenes later casually gives the guitar to Tom Towles, saying it was just “something I came by.” Or the scene where the two of them get a motorist to pull over on the side of a road and then shoot him and stand laughing over the act like two drinking buddies celebrating.

One of the more disturbing scenes is where Michael Rooker and Tracy Arnold sit at the table, where she tells about how her father sexually abused her and then the camera closes in on his impassive face and he states with cold chill vehemence “My mother was a whore” and launches into the story of how he killed her for making him watch her have sex with her men friends. However, at the end of the telling he confuses how he killed her, as though all the women he has killed since have blurred into an indistinguishable whole in his memory.

John McNaughton achieves a great deal in the way he etches his characters, although ironically doing so largely by allowing their motivations to go unspoken. At most, Henry offers an “It’s either you or them, one way or another,” as explanation of his motivations. Michael Rooker went on to build a reputation as a beefily solid supporting character in films but has never seemed more suited to a role than that of Henry here. His looks and silky voiced soft-spokenness seem attuned towards portraying an inexpressive sullenness that broods and then explodes forth into blank psychopathic violence.

By deliberately making Tom Towles irritably crass and unlikable – but also the one who at first objects to Henry’s killing but then joins in with hick sensibility – John McNaughton draws one into a disturbing redefinition of normalcy. And it is a scary definition of normalcy – “You tellin’ me you never killed anybody before?” Henry asks Otis incredulously at one point. Were Henry: Portrait of a Serial Killer any less a film there might have been something comic to the two’s exchanges – like the scene where Henry and Otis shoot a motorist who pulls up to help and then Henry almost mockingly asks Otis “Feel better now?” The most sympathetic character in the film is Becky – her sympathies are clearly misplaced and far too simplistic but her plaintiveness is the most normal and appealing thing in the film. Despite who Henry is, one almost wants to see the two of them get together.

Henry: Portrait of a Serial Killer is loosely based on the true-life story of serial killer Henry Lee Lucas. Lucas was arrested in Texas in 1983 and in police custody confessed to killing up to 600 people in his wanderings across the US. Police officials from various constituencies began to queue up to talk to Henry and were able to close the books on some 150 cases with Henry supposedly providing details that only the killer could know. As the film generally recounts, Henry spent some time in the company of another drifter and self-confessed multiple murderer, the gay hustler Ottis Toole, who also confessed to multiple murders after being arrested. Henry was also involved with Ottis’s underage cousin Frieda ‘Becky’ Powell whom he later killed.

The main problem that became apparent only after Henry: Portrait of a Serial Killer was released was that Henry Lee Lucas appears to have made up most of his confessions. In almost all cases, Henry’s confession was the sole thing tying him to the murder and came unsupported by any forensics. Many investigators have shown up discrepancies, such as proof that Lucas was in other states at the time he claimed to have killed certain victims. It was believed that Lucas had confessed to most of the cases due to his enjoyment of the sensationalism and an overeagerness of the police task force who readily showed him crime scene photos, which he simply fed back to them. In 1998, Lucas’s was the sole death sentence case ever commuted by then Texas Governor George W. Bush.

This does place the film in the embarrassing position of being based on a hoax, with it estimated that at most Henry Lee Lucas killed only fifteen people, conclusively less than half-a-dozen. As the film recounts, one of the murders that Henry did do was his own mother who frequently had sex with other men in front of him.

Henry: Portrait of a Serial Killer is a disturbingly effective film. Sadly, John McNaughton’s career has been somewhat erratic since Henry. He made the problem-ridden sf film The Borrower (1991), which heavily disappointed when it was eventually released. McNaughton picked up with the witty Mad Dog and Glory (1993) but, despite good reviews, this was a flop and McNaughton was left directing tv until he had a hit again with the wonderfully sleazy spoof sexual thriller Wild Things (1998), although was subsequently back directing tv. He also directed the horror film The Harvest (2013).

The film had a sequel Henry: Portrait of a Serial Killer Part II (1996), although this does not involve any of the personnel from the original, nor has the original’s blank effectiveness. Drifter: Henry Lee Lucas (2009) was a further film based on the Henry Lee Lucas story starring Antonio Sabato Jr and more accurately depicts the fact of the case where Lucas made most of his confessions up.