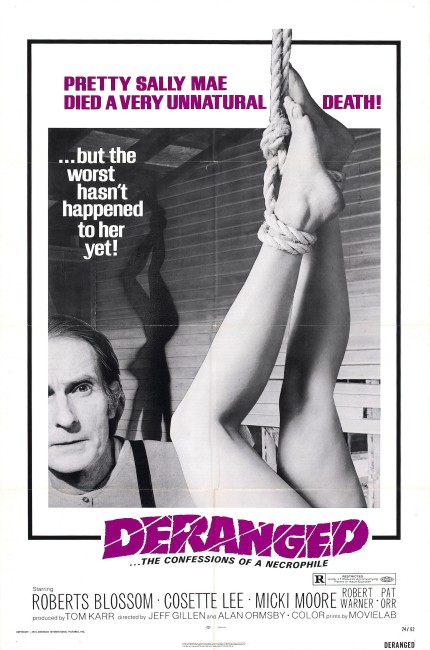 Ezra Cobb is devoted to his ailing mother and is deeply distraught when she dies. After one year living alone on the farm, he hears her voice talking to him and digs her body up and brings it home. Soon he gets the idea of digging up the bodies of other recently buried deceased and bringing them home to make companions for his mother. He also makes costumes to wear out of their faces and skins, as well as musical instruments out of skin and bones. His neighbours suggest that he should meet a woman. He goes to visit Maureen Selby, the only woman his mother trusted not to lure him into sin, venereal disease and take his money, but kills her when she comes onto him. Next, he develops a fixation with Mary Ransom, a woman of loose morals that hangs out at the local bar.

Ed Gein is a figure that has a considerable notoriety in American crime culture. Gein was arrested in 1957 after the sheriff’s department of Plainfield, Wisconsin went to the old, overgrown Gein farm to question him about the disappearance of Bernice Worden who ran the local hardware store where Gein had been seen earlier that day. The police were startled to find Worden’s naked body gutted and hanging upside down on a meat hook in Gein’s barn. This however was only the tip of the iceberg – the interior of the house was filled with parts from numerous bodies where Gein had fashioned skulls into soup bowls and bedposts, covered lampshades and chairs in human skin, and kept severed vaginas in a shoebox. He had even fashioned a vest to wear from skinned woman’s breasts and would apparently gain sexual pleasure from putting it on and dancing about. It is clear that Gein suffered a traumatic shift after the death of his domineering mother in 1945. His obsessions had a clear Oedipal attachment – all the women he killed were of his mother’s age and there is the clearly repressed sexuality and fixation on only being able to love the dead. He was, if one likes, figuratively making love to his dead mother. In 1968, Ed Gein was found not guilty of murder on the grounds of criminal insanity and was sentenced to life in a psychiatric institution. He died of old age in 1984.

It is claimed that several films have borrowed details from the Ed Gein story – Psycho (1960) with its transvestite killer overly attached to and dressing up as his mother and keeping her mummified body in the basement; while Tobe Hooper acknowledged childhood stories of Gein as an influence on The Texas Chain Saw Massacre (1974) with its backwoods family and their house of bones, even a killer wearing a mask of human skin; and of course the killer wearing his victim’s skins in The Silence of the Lambs (1991). Deranged was the first film to actually attempt to depict Ed Gein’s life.

Alan Ormsby’s screenplay follows the Ed Gein story in great detail. The names of Gein and the victims have been changed and the time period updated from the 1950s to the present but otherwise the film follows Gein’s exploits and the details of the two murders he was convicted of with an amazing degree of detail. About the only aspect of the story that the film does fictionalize is in having Gein dig his mother’s body up from the grave and bring it home, which never happened in actuality.

Deranged is worth comparing to Ed Gein (2000), a further film based on Gein’s exploits. Though Ed Gein is more technically accurate in the sense that it shoots period and has the freedom to name its character and victims, it has a crucial tameness at its heart that shies away from depicting Gein’s activities, something that Deranged does not. Even less can be said about the subsequent almost entirely fictionalized Ed Gein: The Butcher of Plainfield (2007).

Jeff Gillen and Alan Ormsby do a superb job. For debuting directors operating on a low budget, their work is amazingly stylish. There is one superb shot that slowly circles Cobb’s room as his mother’s voice starts talking to him, before the camera finally returns a full 360 degrees to show that it is Roberts Blossom talking to himself. Unlike Ed Gein, Gillen and Ormsby do not stint when it comes to depicting Gein’s activities. There is a way out scene that was censored from many of the prints released in 1974, where Roberts Blossom returns from the graveside with a severed head and next we see him gouging out the eyeball and then cutting open the skull with a hacksaw and scooping the brains out with a spoon, before severing the face and finally taking the skull through to talk to the corpse of his mother.

The scenes with Micki Moore a prisoner in the house are fairly whacked out – she stumbling into the living room to find it filled with a circle of desiccated corpses and then the utterly unearthly moment when one of the bodies starts moving and winds up a music box, which proves to be Roberts Blossom dressed in a blonde wig and face mask. The scenes where Blossom has her tied up have a creepy suspense – her attempt to fool him into freeing her while he is caressing her, her escape shot in slow-motion, followed by the nasty scene where he beats her head in. There is a bizarrely spooky scene where Blossom demonstrates his musical instruments to her, holding up a drumstick: “That comes from down there [indicating a thigh bone]. The drum – that’s a tummy drum.”

The scenes where Roberts Blossom lines Pat Orr up in the scope of a rifle and then hunts and pursues her through the woods, capturing her in a bear trap while her boyfriend and his father (Cobb’s neighbours) are only a matter of metres away bear comparison to the pursuit through the woods that came in the same year’s The Texas Chain Saw Massacre. While Deranged is not directed with such a nightmarish intensity as Texas, the effect is every bit as harrowing, none more so than the final image of Pat Orr’s body strung up naked as Roberts Blossom guts it.

The film alarmingly swings between horror and a considerable sense of black humour. There is the scene where Roberts Blossom talks to his mother before going off to Marion Waldman – “All that fat – I have to take some protection with me,” and produces his gun, and then whispers into his mother’s ear “I don’t think she’s alright.” The scene where Marion Waldman attempts to seduce him, where he puzzles about her saying she needs ‘carnal pleasures’ – “Carnal? Carnival?” – is absolutely hysterical. Ormsby and Gillen also adopt a technique that was way ahead of its time of having a narrator tell the story but also opening the fictionalised events out so that the narrator can walk into and around the sets.

Roberts Blossom is absolutely perfectly cast. It is hard to imagine of anybody else as Ed Gein – Blossom is Gein. Blossom had previously only appeared in minor parts in The Hospital (1971) and Slaughterhouse Five (1972) and would go onto a modest career usually playing old timers in films such as Resurrection (1980), Christine (1983), The Last Temptation of Christ (1988) and Home Alone (1990) and appearing several times for Steven Spielberg in Close Encounters of the Third Kind (1977), an episode of Amazing Stories (1985-7) and Always (1989). Deranged was also notable for featuring the makeup effects work of Tom Savini who would go onto become a cult figure with his work on films like Dawn of the Dead (1978), Friday the 13th (1980), Day of the Dead (1985) and as director of the remake of Night of the Living Dead (1990).