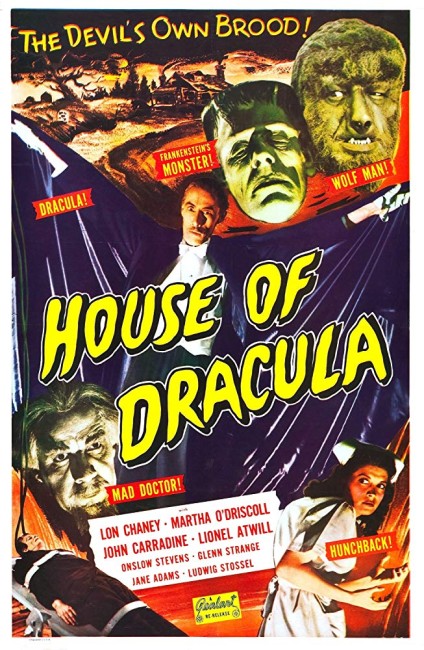 At the same time, both Count Dracula and the wolf man Larry Talbot arrive at the sanitarium of Dr Franz Edelman in Vasaria, seeking a cure for their respective afflictions. Edelman has hope for being able to help Talbot with a rare plant that will expand his cranium. Edelman also arranges a series of transfusions of his own blood into Dracula. Dracula then turns his attentions to seducing Edelman’s nurse Melissa. As Edelman tries to stop him, Dracula reverses the blood transfusion, causing Edelman to turn into a monster.

In all cases, the creative transparency of the novelty of the idea can be seen far too easily and the films had to stretch credibility to find reasons to get their monsters together. House of Dracula actually comes up with the most original and ingenious reason to do so of all the series – in this case, both Dracula and the wolf man have come in search of a doctor who can cure their respective afflictions. For a time, House of Dracula verges on the intriguingly science-fictional in offering a potential medical cure for either.

Armed with such an original idea, House of Dracula starts out well. The director is Erle C. Kenton who also made the companion piece House of Frankenstein the year before, which had some interesting moments, as well as the great The Island of Lost Souls (1932). Erle C. Kenton’s direction is largely pedestrian but not without occasional flashes of interest. There is a fine scene with Dracula – again played by John Carradine who essayed the role in House of Frankenstein and plays the part as a gentleman courtier lacking in much threat – mentally controlling Martha O’Driscoll as she sits at the piano, making her play a strange piece of music that she has never played before until she breaks the spell by inadvertently touching her crucifix.

Unfortunately, as is too often the case with the perpetually rushed screenplays of these films, the latter half of the film fumbles an interesting beginning. Dracula, for no clearly discernible reason, injects Onslow Stevens with his blood and causes him to become a madman. There are some interesting scenes with Onslow Stevens running around the town, casting a giant shadow, scenes that seem to have been modelled on The Cabinet of Dr Caligari (1919) – Stevens’ makeup once transformed has certainly been taken from Caligari. The Frankenstein monster is perfunctorily revived at the end in a cheap lab scene – again the film has to stretch credibility to work this in – before everything expectedly goes up in flames.