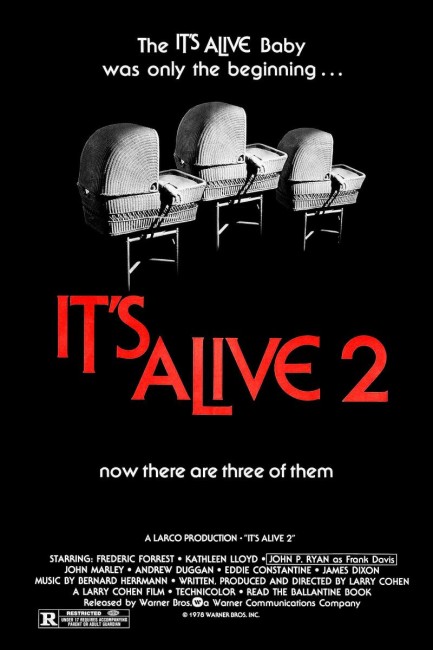 Frank Davis turns up at the baby shower of Eugene and Jody Scott, come to warn them that they are about to give birth to another of the mutant babies. A government security detail led by the ruthlessly determined Mallory is seeking to exterminate the babies but Davis belongs to an enclave of scientists who are trying to protect the babies, seeing them as the next step up the human evolutionary ladder. Davis and the Scotts flee and go on the run from Mallory’s team, just as Jody gives birth to her killer baby.

It Lives Again was the first of his sequels to Larry Cohen’s low budget cult hit It’s Alive (1974). Under the always inventive Cohen’s hand, It Lives Again is one of those few occasions when a sequel expands upon the themes of its predecessor rather than merely parrots what has gone before.

The climax of It’s Alive featured an astonishing reversal where Frank Davis suddenly discovered his fathering urge and made the sudden decision to protect his mutant killer child from its slayers. In It Lives Again that ending has been vastly elaborated, turning Davis into a militant underground Right-to-Life advocate, making astonishingly heartfelt pleas to protect the children from their pursuers. (In an equally striking move, Cohen turns his Herod into not just a faceless killer and supplies John Marley’s nemesis with a remarkable monologue where he gets to explain his motivation as a result of his wife having been slaughtered by the babies).

Added to the heady mix is a movement of scientists protecting the babies because they believe them the next step up the evolutionary ladder. The film has a thematic richness and uniqueness that weaves back into and mirrors the original – at the climax of this film, father Frederic Forrest is placed in the same position as John P. Ryan in the first film, of finally being convinced of his own fathering instinct, but is then handed the on-the-spot choice of what to do – shoot the baby or let it rip open John Marley’s throat.

The one area that It’s Alive has it over It Lives Again is in the domain of scares. The ones here are routine – one scene with a victim trying to shoot a baby as it crawls up under his bedsheet seems more funny than scary. There is at least one good scene where the babies get loose in the lab and Andrew Duggan loses his glasses and is unable to properly see where they are. Wisely, the babies are restricted to only brief glimpses on screen, maintaining their savagery (although if the truth be told it was more to protect their lack of mobility, according to monster maker Rick Baker).

Larry Cohen laces the film with his characteristically darkly sardonic throwaway images – doctors hiding handguns under surgical towels in the delivery room, the incubator in the delivery room encased inside a steel cage, the gate at the scientific enclave displaying a sign ‘Drive Carefully – Children at Play’.

Also of note is Laurie Johnson’s reworking of Bernard Herrmann’s score from the first film (Herrmann had died in the interim), particularly good being the marvellously thunderous and moody piece that plays over the credits against the shimmering silhouette of a baby carriage.

Larry Cohen continued the series with a further sequel, It’s Alive: Island of the Alive (1987). It’s Alive (2008) was a remake of the original.