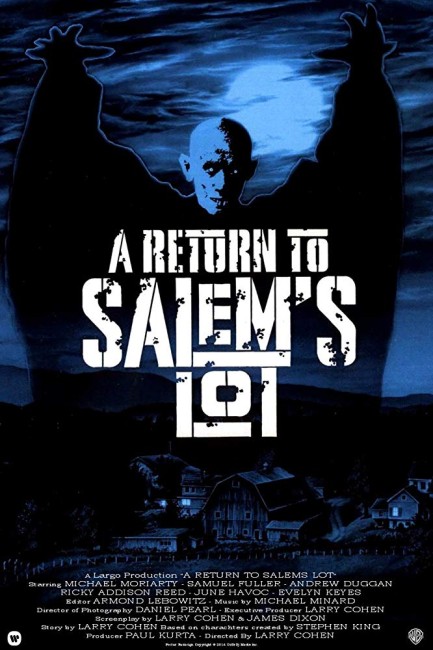 Anthropologist/filmmaker Joe Weber is called back from the Amazon urgently, only to find that it is his ex-wife who drops the custody of their son Jeremy upon him. Joe decides to take Jeremy away to the house he has inherited from his aunt in the small town of Jerusalem’s Lot in Maine. After moving in, they find that the town is inhabited by vampires. Joe is befriended by the town leader Judge Axel. Axel explains how the vampires came to America at the time of the Pilgrims and decided to lead a life in secrecy here. He now wants Joe to write their history for them. At the same time, Jeremy is seduced away by a vampire girl who looks his own age and soon he decides that he wants to join the vampire society. Joe also meets Kathy, a girl from his teens who is now a vampire, and sleeps with her, only for her to become pregnant. As Joe tries to stop Jeremy being wooed over, he is joined by the vampire hunter Vanmeer.

Salem’s Lot (1975) was Stephen King’s second novel. Following the success of Brian De Palma’s adaptation of Stephen King’s Carrie (1976), Salem’s Lot was snapped up as a film property. For several years, it wavered back and forward between being a film, before eventually emerging as a tv mini-series Salem’s Lot (1979) with Tobe Hooper as director. Salem’s Lot is one of the better adaptations of a Stephen King novel and is a well worthwhile work. It was later spun out into this video-released sequel and then later still remade as another tv mini-series ‘Salem’s Lot (2004). This sequel was made by Larry Cohen, the quirkily individualistic genre director who made low-budget gems such as It’s Alive (1974) and sequels, God Told Me To/Demon (1976), Q – The Winged Serpent (1982) and The Stuff (1985). (See below for Larry Cohen’s other films). Cohen was also one of the directors attached to the earlier proposed film version of Salem’s Lot.

The first thing that should be noted is that A Return to Salem’s Lot is only a loose sequel to Salem’s Lot. It is not even connected at all – at most, it shares the name of the town and the same basic plot of an outsider who arrives to find the town taken over by vampires. Indeed, Larry Cohen has thrown continuity to the book/mini-series out altogether – Stephen King and Tobe Hooper had a town in the present-day suddenly being invaded by a single vampire and its bite spreading infection to the human populace of the town; Cohen has the town already inhabited by the vampires who have been there since the arrival of the Mayflower. It seems that rather than making a sequel, Larry Cohen has regarded Salem’s Lot as a loose text upon which to free-associate his own ideas. (It should also be noted that the film’s video cover prominently features a picture of Barlow the vampire from the tv mini-series, although this character, nor anything in its likeness, does not appear in the film).

Larry Cohen’s films are notable for their uniquely thoughtful sympathy for the monsters and Cohen’s typically wry sense of humour and sarcastic characterisations. Cohen’s amusing idea in A Return to Salem’s Lot is that the vampires are not the elements of chaos and carnality threatening to tear society asunder as they have been ever since Bram Stoker’s Dracula (1897) but are more like genteel conservatives who are seeking to preserve the status quo of their society, not unlike a New England country club at times. Rather than trying to devour the world, they are simply trying to persuade humanity that they are ordinary. Andrew Duggan’s judge has an amusing speech: “War, disease, killing for profit – do you think that world is any better than ours?”

There are all manner of wry observations: “Human blood’s still the best, but these days it’s not quite good for you, what with drugs, hepatitis and this AIDS going around.” Larry Cohen packs witty ideas around the edges – marriage ceremonies between immortal vampire children – while director Sam Fuller, the director of Shock Corridor (1964) and White Dog (1982), has a highly amusing supporting role as a peppery vampire hunter who is also a Holocaust survivor. Also appealing is the characterization of the young son played by Ricky Addison Reed, where Cohen has made a clear effort to avoid the cutsie and has the kid smoking and telling his father “Fuck you.”

On the minus side, Larry Cohen appears to have more fun throwing around wild ideas than he ever does developing the script. A Return to Salem’s Lot was shot back-to-back with It’s Alive III: Island of the Alive (1987), another Cohen film that shows sign of a chaotic profusion of ideas and a hasty shooting schedule. Both films look cheap and hurried. The clearly rushed nature of the production prevents Larry Cohen from doing a good job directing – other films of his such as It’s Alive do a far more developed job of generating suspense but the attack scenes here look ragged. (The one exception is a decently suspenseful scene where Sam Fuller gets caught in a bear trap at the bottom of a set of stairs going down to the basement just as the vampires start getting up from their coffins). There is a tatty looking vampire monster briefly seen running around.

Larry Cohen’s other genre films are:– the killer mutant baby film It’s Alive (1974), the bizarre alien messiah film God Told Me To/Demon (1976), It Lives Again/It’s Alive (1978), the werewolf comedy Full Moon High (1982), the monster movie Q – The Winged Serpent (1982), the sentient fast food takeover film The Stuff (1985), It’s Alive III: Island of the Alive (1974), the witch comedy Wicked Stepmother (1989) and the mad scientist film The Ambulance (1990). Cohen’s other genre scripts include all of the episodes of the alien invasion tv series The Invaders (1967-8), the psycho-thriller Daddy’s Gone A-Hunting (1969) and the psycho artist film Scream, Baby, Scream (1970). These days Cohen has gone into seeming retirement as a director at least – which is a great loss to the world of genre cinema at the very least – and his only work consists of screenplays for the Maniac Cop series beginning with Maniac Cop (1988), various Ed McBain’s 87th Precinct tv movies, the original story for Abel Ferrara’s Body Snatchers (1993) remake, the stalker film The Ex (1996), Uncle Sam (1997) about a patriotically minded undead Gulf War veteran, the hilarious psycho sperm donor film Misbegotten (1997), and occasional A-budget cinematic releases like Guilty as Sin (1993), Phone Booth (2002), Cellular (2004), Captivity (2007), the remake of It’s Alive (2008) and Messages Deleted (2009).