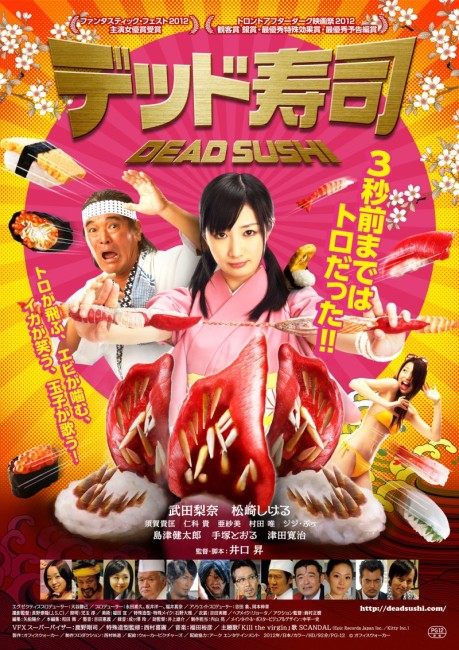 Keiko struggles to be a sushi chef like her celebrated father but he constantly criticises her as not being good enough. She decides to run away from home and takes a job as a waitress at a hotel. She struggles to keep up as a newcomer but cannot help herself from speaking out in criticism before an important business delegation at the way the in-house chef Tsuchida prepares his sushi and the crude way the group eat it. The derelict Yamada, who used to work for the visiting company before being fired, takes revenge by injecting a formula he developed into a squid. The squid then starts to infect all the sushi in the hotel, turning them into killer man-eating monsters that begin attacking the guests and staff.

Dead Sushi falls into the vein of films like Attack of the Killer Tomatoes (1978), The Refrigerator (1991), The Killer Condom (1996) and Killer Tongue (1996) that choose the most absurd seeming everyday item they can as the basis of a monster movie. Indeed, 2012 saw not one but two other killer sushi films with the more serious US-made Parasitic (2012) and the non-genre gangster film Sushi Girl (2012).

Dead Sushi starts in with a madcap slapstick tone. Indeed, for a good way into the film, you think that cartoonish slapstick with obvious physical punchlines and humiliations are about the only thing the film has going for it. (The one thing the film does do is give its audience a grounding in the proper means of sushi preparation for a chef and demonstrate the correct way it should be eaten – where you get the impression that the film has had experts in the subject on set as advisors).

For nearly the first half-hour, I felt I was watching a film that seemed to be running at a frenetically raucous pace but was only firing off gags with crude punchlines. Even the first few appearances of the sushi monsters seemed limited in possibility. That started to change as the film became increasingly more whacko. Noboru Iguchi readily leaps off into the absurd with no apparent limits on how ridiculous a film he is prepared to pull off. We get hordes of sushi flying around in attack mode. Humans are infected by what they have eaten, including one character with his face in a twisted mess and another turned into a salmon headed man who comes after the heroine with an axe at the climax. Heroine Rina Takeda adopts a talking egg roll as companion, which she nicknames Eggy, where it becomes the equivalent of the small furry animal in a children’s film.

The film becomes completely insane in the last twenty minutes. Here infected humans become zombies that spill rice out of their mouths – the villain seeks to escape only to find that the sushi have snuck in and infected the bowl of ramen noodles he ate. A spicy sushi sprouts a flamethrower as it goes into attack. Just when you think things are not going to get any crazier, we get scenes with two pieces of sushi having sex with each other and giving birth to hordes of flying sushi.

The climax has the heroine fighting off the sushi hordes using her martial arts skills. In one of the most absurd images, several of the sushi comes together and combine as a giant sushi battleship – a scene where Noboru Iguchi claimed to be spoofing Peter Berg’s Battleship (2012). The rationale for everything that is going on is slim but the film hits in with a tone that harkens back to they heyday of nonsense horror films like The Evil Dead II (1987), Bad Taste (1988), Story of Ricky (1991) and Braindead/Deadalive (1992).