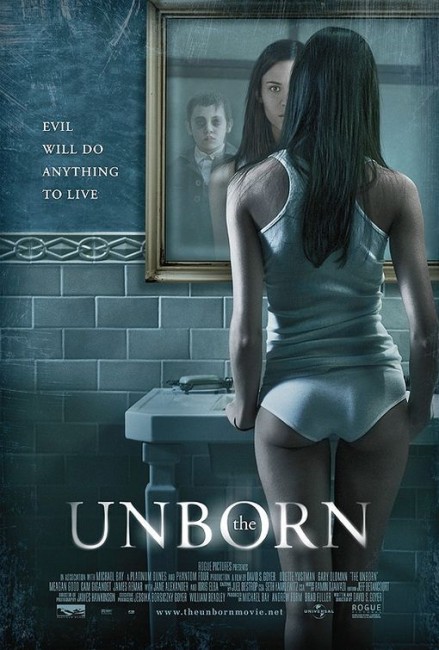 Chicago university student Casey Beldon starts to have troubling dreams about a young boy. She imagines him everywhere saying “Jumby wants to be born.” At the same time, one of Casey’s eyes starts to change colour. Casey’s father tells her how she is a twin but that her brother died in the womb and that his nickname was Jumby. A trail of clues leads Casey to aging Holocaust survivor Sofi Kozma. Casey comes to believe that the ghost boy is Sofi’s twin brother Barto who was killed in Nazi experiments and is trying to return to life. She learns about a Jewish spirit known as the Dybbuk that sees twins as a means to re-enter the world and believes the Dybbuk has chosen to do so via her dead brother. As the Dybbuk attacks the people around Casey, all the while becoming stronger, she seeks to conduct an exorcism to banish it.

David S. Goyer is one of the finest genre screenwriters of the moment. Goyer has been predominantly associated with comic-book adaptations such as The Crow: City of Angels (1996), Blade (1998), Nick Fury, Agent of Shield (tv pilot, 1998), Blade II (2002), Batman Begins (2005), Batman: Gotham Knight (2008), The Dark Knight (2008), The Dark Knight Rises (2012), Ghost Rider: Spirit of Vengeance (2012), Man of Steel (2013), Batman V Superman: Dawn of Justice (2016) and Terminator: Dark Fate (2019). Goyer was also been announced as the director of the now defunct X-Men Origins: Magneto and was long associated with Ghost Rider (2007), retaining executive producer credit on the finished film. Elsewhere, Goyer has written non-comic-book works such as Death Warrant (1990), Demonic Toys (1992), Arcade (1993), The Puppet Masters (1994), Dark City (1998) and Jumper (2008). Goyer has also produced the genre tv series’ Sleepwalkers (1997) about dream researchers; FreakyLinks (2000) about paranormal investigators; Threshold (2005) about the investigation of a UFO; the cinematic adaptation of the Marvel Comic Ghost Rider (2007); the tv series Flash Forward (2009-10) about a mysterious worldwide premonition; the tv series DaVinci’s Demons (2013-5) about a fantastical secret history of Leonardo Da Vinci; the tv version of Constantine (2014-5), the ghost story The Forest (2016), the robot dog film A-X-L (2018), the animated web series Constantine: City of Demons (2018), the Superman prequel tv series Krypton (2018-9) and the A.I. film Tau (2018). The success of these has allowed Goyer to branch out as a director, having first appeared with Zigzag (2002), an excellent and little-seen non-genre drama about an autistic boy living on the streets. Goyer then went on to Blade Trinity (2004), a worthwhile sequel that not many people liked, and The Invisible (2007), a remake of a Swedish film about a teenager who becomes a disembodied spirit. The Unborn was David S. Goyer’s fourth film as director.

While his scripting work for Dark City, Batman Begins, The Dark Knight and to a lesser extent the Blade films marks David S. Goyer as a writer par excellence, his prospect as a director has been a more divided one. I liked both Zigzag and Blade Trinity, although not many others did. The Invisible sat just between whether it could have gone one way or another. However, The Unborn has to count as a disappointment.

Even the very title The Unborn seems generic. [It was also used as the basis of the otherwise unconnected The Unborn (1991), a low-budget horror film from Concorde-New Horizons about a mad scientist conducting experiments on unborn foetuses as part of a fertilization program. This also led to a sequel The Unborn II (1994)]. Indeed, where I live, The Unborn opened within the space of two weeks of both The Uninvited (2009) and Underworld: Rise of the Lychans (2009) where the similarity of titles ended up causing much misunderstanding – the ticket desk confessed to getting frequently confused over which film people were asking to go to.

Maybe it was the confusion with The Uninvited but watching The Unborn one could not help but feel that David S. Goyer was trying to copy the recent spate of Asian horror remakes. Certainly, the ghostly boy who keeps popping up everywhere and the scene where aging Michael Sassone scuttles along on all fours with head turned upside down cannot help but remind of the unearthly things crawling down stairs that we had in Ju-on: The Grudge (2003) and The Grudge (2004) – perhaps mixed with the Spider Walk sequence in the re-edited version of The Exorcist (1973) – while the things frequently popping out of mirrors also reminded of Mirrors (2008).

Perhaps the one distinction The Unborn might hold is that Davis S. Goyer has made an effort to buck the trend of usual Christian demons and draws instead from Jewish mythology. That said, all that he produces in the end is another variant on the standard possession tale. There is also some fundamental confusion about whether what is haunting Odette Yustman is her unborn twin brother Jumby, the dead Holocaust twin Barto or the Dybbuk entity, all of which are posited as explanations at various points. Outside of the Jewish mythology angle, there is nothing remarkable about The Unborn as a script, least of all for a writer of David S. Goyer’s calibre.

In the director’s seat, David S. Goyer serves up a number of scares that might, had they come in a different package, been spooky. The various dogs and people with heads turned upside down, hallucinatory floods of bugs in bathrooms, the undead little boy popping up everywhere have occasional effect. The one standout sequence is the aforementioned scene with the possessed Michael Sassone scuttling along on all fours.

Equally, these come rooted in a package that turns everything into a standard horror film by the numbers. We have seen too much of this kind of horror film in the last few years – handsome and good looking leads around the age of twenty who are frequently afforded no more depth than being given a name; canned pop-up scares that are scary but not too much; nothing in the film that pushes the gore or sexual content envelope beyond the all-essential PG-13 that can get the younger teen audience in.

The Unborn feels like a good many of these recent other horror films – see examples like Pulse (2006), The Messengers (2007), the aforementioned Mirrors, Prom Night (2008) and Shutter (2008). With most of these, one can safely detach and allow everything that transpires to wash over one without the slightest effect on anything other than the level of automatically generated frissons. You could extract the scare scenes, swap the raison d’etre and blandly homogenous twentysomething casts about and almost nothing would be different about any of these films. The climactic exorcism is a particular disappointment where it seems all sound and fury and the only things that move it along are a series of pop-up scares, special effects and people being thrown about and becoming instantly possessed.