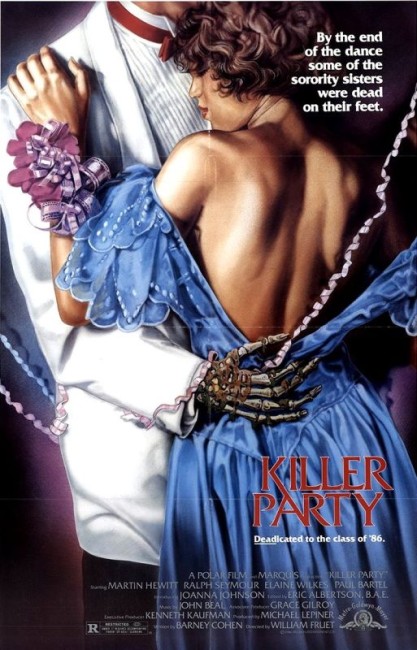 aka The April Fool

As pledges at the Sigma Alpha Pi sorority house, Jennifer, Vivia and Phoebe are required to undergo a series of ritual hazings. Vivia plays a prank in which she lets the others think that she is snatched down to the cellar and her head seemingly guillotined off. The sorority’s head sister Veronica wants them to play a similar trick on a rival fraternity during a party. Jennifer is apprehensive as a murder occurred for real years before at the abandoned fraternity house where the party is to take place during which someone was guillotined for real. As the party gets underway, a figure appears and starts killing people but the attendees cannot be sure if it is real or just another prank.

William Fruet is a Canadian director who made a modest output of genre films during the great period of Canucksploitation. Fruet first appeared with the fine Backwoods Brutality film Death Weekend/House By the Lake (1976) and went onto the likes of Search and Destroy (1979), Funeral Home (1980), Killer Instinct/Baker County, USA (1982), Spasms (1983) and Blue Monkey/Insect (1987).

Killer Party was originally shot under the title The April Fool. Purportedly, shooting began in 1978 but the film was not completed and released until 1986. One is somewhat doubtful about such a claim – the film is heavily reliant on the tropes of the slasher film, which did not fall into place until around 1980, while the hair and clothing styles seem more like 1980s than 1970s. The film was forced to change its title from The April Fool due to a number of other works also coming out with similar titles around the same time – the US-made April Fool’s Day (1986) and another British film that started with the same title that was eventually released as Slaughter High (1986).

Killer Party emerges as a fairly standard slasher film. William Fruet and the cast craft the characters as mildly more likeable and rounded than the usual types that inhabit these films – Sherry Willis-Burch even gives an appealingly lively performance. In terms of slasher mechanics, Fruet passes through a number of standard set-ups and red herrings. One major complaint about the film might be that it takes far longer to get to the point where the cast start being killed off than almost any other slasher film – nearly an hour of the running time consists of build-up while all of the killing set-pieces only occur during the last thirty minutes.

Like April Fool’s Day, which used the title date to spin out another holiday-themed slasher film, Killer Party, although not even set on April Fool’s Day, adopts a similar jokey style. There is a fine sequence during the middle of the film where Sherry Willis-Burch is abruptly snatched and then the others find her in the cellar imprisoned in a guillotine begging for help before she is abruptly beheaded – only for this to then be revealed as a prank. This hits a tone that sits perfectly between horror and prank gag that April Fool’s Day was aiming before (but never quite managed). The main slasher scenes in the latter third maintain a similar sense of characters not knowing whether people are genuinely being killed or it is all an elaborate set-up.

During the last ten minutes, the film takes an abrupt dogleg turn and jumps from being a slasher film into a possession film along the lines of The Evil Dead (1981) and in particular Night of the Demons (1987) with a member of the cast running around developing glowing eyes, slavering obscenities and killing people. This seems an abrupt and confusing jump of sub-genres to no good purpose, let alone one that has never been particularly well established by the plot.