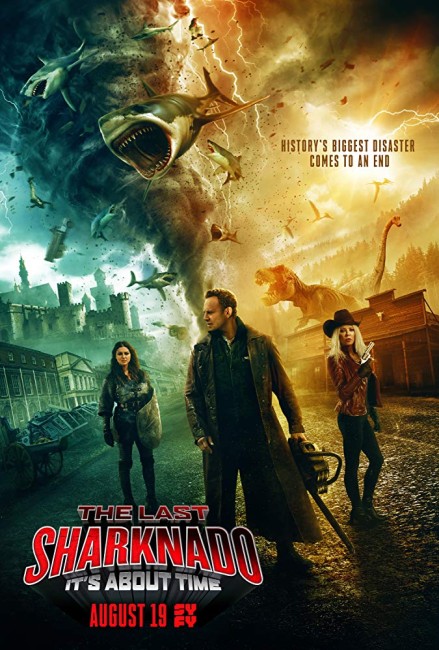 Fin Shepard has been thrown back in time to prehistory. He finds April, Nova and Bryan are also there, having been brought back by his son Gil. They are assigned to stop the first sharknado before it hits and spreads to the point it threatens the whole world. After doing so, they travel through the time warp, stopping off at Camelot, the American Revolutionary War, the Wild West and other places, encountering Fin’s parents and Nova’s grandfather along the way, all the while combatting sharknados.

The Last Sharknado: It’s About Time is the sixth and what is announced as being the last of the Sharknado films. The series began with Sharknado (2013), which became a word of mouth bad movie phenomenon. This was followed by Sharknado 2: The Second One (2014), Sharknado 3: Oh Hell No! (2015), Sharknado: The 4th Awakens (2016) and Sharknado 5: Global Swarming (2017), all reuniting stars Ian Ziering and Tara Reid and director Anthony C. Ferrante.

As the Sharknado series went on, it became increasingly more over-the-top and wilfully ridiculous from sharks on rollercoasters and aboard the space shuttle to the time of Global Swarming involving time travel plots and sharknados destroying major historical landmarks, culminating in the End of the World. All of the sequels feature assorted celebrities, frequently in absurdly mismatched roles, turning up to get devoured.

With The Last Sharknado, The Asylum have wrapped the series up, bringing back most of the key players – Ian Ziering, Tara Reid and Cassandra Scerbo. Dolph Lundgren, who was the grown-up Gil, is absent and so the role of Gil is played by several different actors throughout. The end of the film concludes everything with a piece of temporal editing that goes back to the start of the first film and prevents the first sharknado thus somehow stopping all the others (it doesn’t pay to think too much about the logic behind why things are happening), which wraps the series up in a way that seems final (or is likely to prove problematic to any subsequent sequel).

All the wacky cameos you expect of the series are there. The stopover at Camelot features drag actor Alaska (whose usual performing surname of Thunderfuck has been dropped) as Morgana, Neil de Grasse Tyson (who proves he is just not an actor even in a non-serious film like this) as a pterodactyl-riding Merlin and an aging Marina Sirtis of Star Trek: The Next Generation (1987-94) fame there for some reason, plus Ian Ziering pulling a chainsaw as opposed to the sword out of the stone. The Western sequence features Dee Snider, the cross-dressing lead singer of the band Twisted Sister, doing a fairly serviceable acting role as the town sheriff. The climatic time vortex scenes includes assorted appearances from celebrities cast as various historical figures including LaToya Jackson as Cleopatra, James Hong as Confucius and O.J. Simpson associate Kato Kaelin as a Viking.

The oddity of The Last Sharknado is that it feels tame as the excesses of the previous Sharknado films go. All the usual over-the-top sequences are there – most amusingly a scene where Ian Ziering ends up in a shootout with a shark that has Billy the Kid’s bitten-off arm in its mouth, or some dodgy effects scenes where dinosaur tails are used to bat falling Chicxulub meteorites to obliterate a prehistoric sharknado – but none that top anything in the previous films in terms of sheer dementia.

Indeed, the plot, again from Scotty Mullen, seems to be rehashing much of Global Swarming – sharknados fought at key events/landmarks throughout time before Fin is thrown into the far future – as though it is recognising there is nowhere more ridiculous that the series has left to go.

Even worse, the film starts to get sentimental – the scenes where Cassandra Scerbo sets out to save her grandfather and the concluding scenes returning to the bar at the very start of the first film just before the initial sharknado hits – come with nary an over-the-top moment as though Anthony C. Ferrante and the cast were playing them straight while only just holding back a flood of emotion as the series comes to an end.