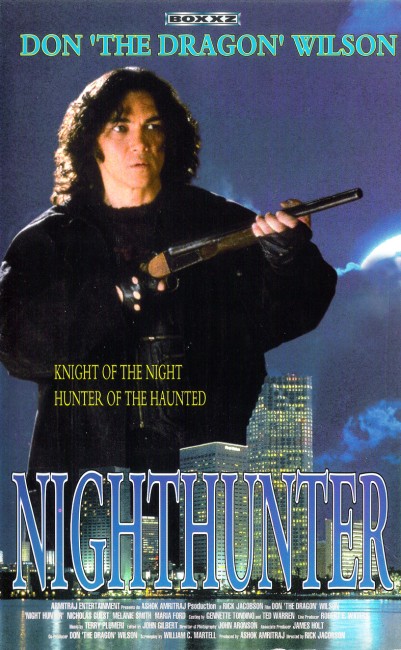 In 1968, vampires invade the home of young Jack Cutter’s parents. Before he is killed, Jack’s father gets him to safety, entrusting to his care a book that lists all the vampire families. In the present-day, Jack operates on his own, eliminating all of the vampire listed in the book one by one. After killing the latest batch of vampires in a restaurant, Jack is listed as a wanted fugitive by the LAPD. Raimy Baker, a tabloid journalist from the National Inquisitor, is sent to Los Angeles to get an exclusive but becomes involved when Jack forces her to drive away at gunpoint while being pursued by police. Raimy becomes drawn into helping Jack as he tries to kill the last of the vampire families before the coming eclipse when they will be able to breed more of their kind.

Night Hunter was a B action movie produced by Roger Corman’s Concorde-New Horizons and expatriate Indian tennis player turned producer Ashok Amritraj. The film was mounted as a vehicle for kickboxing champion Don ‘The Dragon’ Wilson who had first come to fame in New Horizons’ Bloodfist (1989) and a number of subsequent B films.

Night Hunter‘s distinction in retrospect might be that it was the first film to combine the vampire film with the action movie, something that became very popular over the next decade with efforts such as Blade (1998) and sequels, Underworld (2003) and sequels, Van Helsing (2004), BloodRayne (2005) and Ultraviolet (2006). Regular New Horizons director Rick Jacobson moves the action along with a general competence – Don ‘The Dragon’ Wilson showing his martial arts muscle and kicking heads in, lots of artillery shot, a car chase/shootout. The film all comes down at the level of a B action movie and at least delivers what is expected of it in this regard.

Ultimately the failing of Night Hunter might be that it is nothing more than a routine actioner. Certainly, as a vampire film, it has almost nothing interesting to say. The script shuffles around many of the elements that would become cliches amid the abovementioned and other subsequent vampire films – the vampire hunter who is single-mindedly determined to avenge the death of his loved ones a la Blade, factions that have fought wars across the ages, the eclipse seen as a crucial event for vampires, not to mention the wildly overused plot about the lead vampire seeing the female lead of the show as a reincarnation of his lost love.

What is disappointing about the film is the fact that it leaves a good deal about its set-up unexplained. The Hunters are supposed to be the vampires’ nemeses across the ages but Don ‘The Dragon’ Wilson appears to be the only one of them and it is never explained who The Hunters are. There is no clear explanation of how Don ‘The Dragon’ has gained some of his abilities – like being able to sniff out vampires or what his mysterious vial of healing fluid does. Or for that matter how The Hunters and Don’s father obtained the list of vampire families. The film disposes much of the supernatural element of vampirism (even their aversion to daylight), which can be potentially interesting, but here serves to make for mundane vampires that never seem to do much more than demonstrate an invulnerability and an occasional taste for blood. If the film had spent more time on exposition than it did on action scenes, it would have helped no end.

The script comes from William A. Martell who has written a number of other action films, mostly for Concorde-New Horizon and Ashok Amritraj. One of Martell’s idiosyncrasies is that he names all the characters after horror film directors (something that was to become a cliche in the next few years too). Here we get characters named after Dario Argento, Tod Browning, William Castle, Terence Fisher, Jimmy Sangster, Jacques Tourneur, Edgar G. Ulmer, a Roy Ward and a Baker after Hammer director Roy Ward Baker, as well as a heroine named Raimy (after Sam Raimi) and a supporting heavy named Sid O’Mack after genre screenwriter Curt Siodmak.