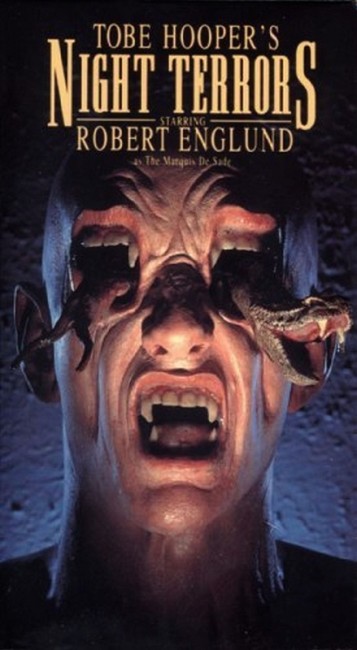 Teenager Eugenie (or Genie) Matteson arrives to join her archaeologist father on a dig in Alexandria. While in the marketplace, three Arab men attack Genie because she is dressed provocatively but a stranger Sabina saves her. The sophisticated Sabina introduces Genie to the handsome Sheik Mahmoud and Genie allows him to seduce her. She is then introduced to Paul Chevalier, a weird puppeteer who claims to be a descendant of the Marquis de Sade. Chevalier draws her into a series of sadomasochistic sexual games. At the same time, those that try to warn Genie about the games, saying that Chevalier and the others are a cult, start turning up murdered.

Tobe Hooper once had a hit with The Texas Chain Saw Massacre (1974). Since then however, Hooper’s career has been a ragged one – and, in the eyes of some of his more severe critics, a single downward slide ever since Texas Chain Saw. One doesn’t entirely agree with this as Hooper has made some worthwhile efforts – the slasher movie The Funhouse (1981), Poltergeist (1982) under Steven Spielberg, the entertaining Lifeforce (1985) and the underrated The Texas Chainsaw Massacre 2 (1986). Into the 1990s and 00s though, Tobe Hooper has become an increasing harder figure to keep defending as dire works like I’m Dangerous Tonight (1990), The Mangler (1995), The Apartment Complex (1999), Mortuary (2005) and Djinn (2013) have made his position all but indefensible.

The most confusing is the ending where the Gnostics appear and by some means are able to cause Robert Englund to die by holding up the sets of scales they carry. What the significance of this is could be anybody’s guess – the film never deigns to explain. They just appear out of nowhere, seem to supernaturally cause him to bleed to death and then vanish again without any explanation.

Perhaps the worst aspect of Night Terrors is the casting of Robert Englund who was then still regarded as a hot genre name on the basis of his role as Freddy Krueger in the A Nightmare on Elm Street films and had been working with Hooper since way back in Eaten Alive (1977). For all the cult appeal he found among the Elm Street enthusiasts, Robert Englund is a terrible actor. Here he plays the dual role of the Marquis de Sade and his descendant – all in a high camp performance. Camp is perhaps an intriguing interpretation – and, when one thinks about, quite appropriate to de Sade (the film makes very loose claim to be based on de Sades Philosophy in the Boudoir (1795), which concerned the seduction of a teenage innocent named Eugenie) – but Englund’s performance is simply awful. The opening moments with Englund as de Sade being whipped and yelling “Perhaps you should soak the lash in vinegar” as encouragement and then having acid poured in his eye are more hysterical than horrific, or even for that matter provocative.