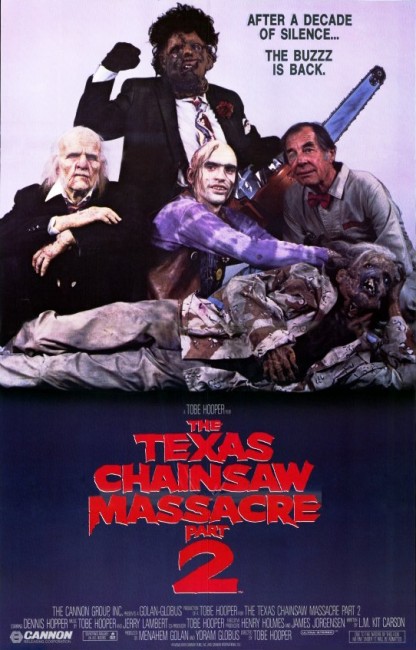 It is thirteen years after Sally Hardesty and her friends were attacked in the Texas Chainsaw incident. While Sally was committed to an asylum, no trace has ever been found of the killer family. On a backwater Texas road, two drunken rich kids challenge a pickup truck to a game of chicken, while at the same time calling in to radio DJ Vanita ‘Stretch’ Brock on their car-phone. However, the driver of the pickup is Leatherface who turns and hacks them and their vehicle up with a chainsaw. Stretch is then approached by Texas Ranger Lefty Enright, Sally Hardesty’s cousin, who is obsessed with finding the cannibal family. Lefty gets her to replay the tape of the killing on the air in the hope of drawing the killers out. This instead provokes Leatherface and his brother Chop-Top, a crazed ex-Vietnam vet, to abduct Stretch. They make her prisoner in their lair under a war games amusement park. There Stretch finds a strange ally in Leatherface, who develops a crush on her.

The Texas Chain Saw Massacre (1974) was one of the most notorious horror films of the 1970s. It caused a censorship outrage and was banned in several countries. It made the name of Tobe Hooper who went onto direct various mainstream films, most notably the Spielberg-produced Poltergeist (1982). After some eleven years in litigation, Tobe Hooper managed to get the rights to Texas Chain Saw Massacre back and set about making this sequel.

Now backed by a major company (Cannon) and with a considerably larger budget, Hooper was able to draw on names like Dennis Hopper, makeup effects supremo Tom Savini and scripter L.M. ‘Kit’ Carson, author of Wim Wenders’ Paris, Texas (1984). (The only actual returnees from the original production were Tobe Hooper and Jim Siedow in the role of the Cook). The Texas Chainsaw Massacre 2 was part of a three-film package deal that Tobe Hooper made with producers Menahem Golan and Yoram Globus at their Cannon production company, along with the alien space vampires film Lifeforce (1985) and the remake of Invaders from Mars (1986), all of which had budget problems, were intensely disliked by audiences and ended up being box-office flops that contributed to the financial collapse of Cannon.

The Texas Chainsaw Massacre 2 did not attract the notoriety of the original – in fact, most fans of the original detested it. Contrarily, I rather enjoyed it. The Texas Chain Saw Massacre went as far as it is possible to go in terms of brutalising an audience, which leaves about the only place left for Tobe Hooper and Kit Carson to go here being over the top and into outrageously sick black humour. “That got the haemorrhoids, at least it’ll save a trip to the hospital,” yells the Cook after being chainsawed in the buttocks. Hooper and Carson keep pushing the black humour into the hysterically sick, milking the gore with a truly outré sense of taboo-defiance. By the time one has reached the scene where Bill Moseley sits bashing Lou Perry’s head in with a hammer while yelling “Incoming mail,” the film becomes genuinely menacing in its sense of black humour.

The scene with the family trying to get the Grandfather to bash Caroline Williams’s head in, where she is held with her head over a bucket as he keeps dropping the hammer, has a hysterical nightmarish quality. Although, the most outrageous scene is surely the moment where Leatherface stands over Caroline Williams and tries to thrust a chainsaw up into her crotch, mutely grunting with impotent frustration.

Tobe Hooper delivers up a number of scenes of horrific impact, none more than the startling opening where the game of chicken ends up with a pickup truck driving backwards alongside a Mercedes, with Leatherface on top wildly waving the chainsaw, cutting down into the car’s bodywork, leaving the driver with the top of his head cut off. Hooper and Tom Savini manage to create a very weird blend of pathos and sickness in the scene where Leatherface places L.G.’s sliced-off face over Stretch’s as a gesture of affection, followed by an incredible scene where the hacked-up L.G. staggers back to life, only to find Stretch wearing his own face. On the other hand, the labyrinth sequence never succeeds in having the all-out bad-acid-trip-without-any-acid quality of the similar sequence in the original.

The characters are delineated with much more substance here – Leatherface is even given pathos in Bill Johnson’s powerful portrayal – mutely quivering and shaking the chainsaw above his head, his little pink tongue obscenely licking his lips from behind the sliced-off human face he wears. Chop-Top, the new addition to the family, as portrayed by Bill Moseley is a great creation – a bombed-out Vietnam vet with an exposed steel plate in the head, introduced as a zombiefied hippy, feverishly muttering and heating up the tip of a coat-hanger with a cigarette lighter to stroke the side of his head with and then picking off and eating the bits of charred flesh.

Even the nominal good guys are utterly whacko – Dennis Hopper is in full OTT regard, charging around the amusement park with chainsaws strapped to his belt like a Western gunslinger, chainsawing everything in sight while singing hymns and incoherently ranting about the Devil. Even the heroine goes berserk in the disturbing final image, standing on the top of a tower waving a chainsaw above her head as the camera fades out.

Blood is certainly not merely suggested this time, Tom Savini gets to deliver some of his most brilliant work. Particularly standout is the makeup job on the 100 year-old grandfather. Mention also must be made of the superb production design job on the underground labyrinth, which looks like the ruins of a 1920s Grand Hotel turned into a slaughterhouse with bizarre tableaux of corpses sitting under sunlamps, at dinner tables, wearing Walkmans, suspended on wires, amid a bewildering maze of chandeliers and Christmas lights, all set beneath a playground specialising in the reconstruction of America’s warmongering past. It is something that becomes a bizarrely appropriate metaphor for the film’s social milieu – the suggestion of contemporary Reaganite America tripping on its defence image and war hero past while sitting beneath, rotting in its underbelly, lies an insane cannibal slaughterhouse chewing people up and spitting them back as fast-food in the name of free-enterprise consumer product.