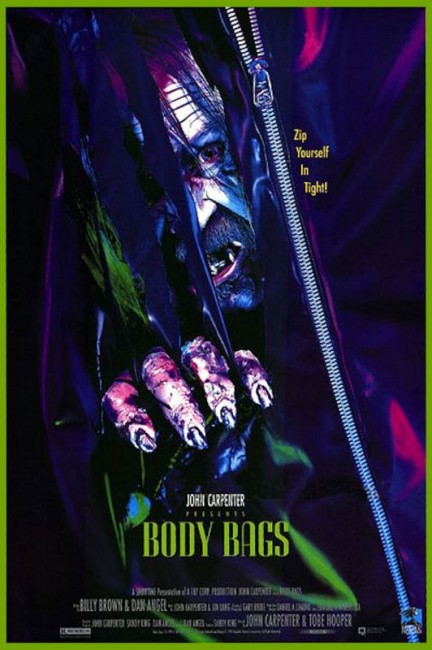 In the morgue, a ghoulish coroner tells the stories of the unnatural ways that several of the dead bodies present died. The Gas Station:- Anne takes a job as a attendant at a gas station on night duty only to discover that she is being stalked by an escaped killer. Hair:- Richard Kobritz is obsessed with his thinning hair. No solution he tries works until he goes to the Roswell Hair Laboratories, which offer a revolutionary treatment that give him a thick mane of hair that grows down the middle of his back overnight. Richard then finds that his new hair will not stop growing. Eye:- Pro baseball player Brent Matthews is caught in a car crash and comes around in hospital to find that he has lost his right eye. Doctors offer him an experimental surgery where he is given a replacement eye taken from a cadaver. After he recovers, Brent finds himself experiencing gruesome hallucinations and violent feelings towards his wife. He realises that he has been given an eye taken from an executed murderer.

Body Bags is one of the overlooked items in the oeuvre of genre director John Carpenter. Carpenter had been a big name with a cult following in the 1980s after hits like Halloween (1978), Escape from New York (1981) and The Thing (1982) among others but his star had started to wane in the 1990s and beyond. (See the bottom of the page for John Carpenter’s other films). Body Bags was made as a pilot film for what was clearly an attempt to mount an anthology horror tv series in the vein of the success enjoyed by Tales from the Crypt (1989-96). Besides directing, the film also featured Carpenter made up as a ghoul offering up wisecracking puns as he introduced each segment, telling the stories of the deaths of the bodies that were brought into his morgue. The idea of a Body Bags tv series failed to sell beyond this pilot film.

Body Bags‘ major failing point is that as a narrator, a la Tales from the Crypt‘s Cryptkeeper, John Carpenter is not cut out to do the whole ghoulishly cackling, bad puns thing. Carpenter has never played in front of the cameras as an actor before and his performance here is campy and rather silly. Moreover, the tongue-in-cheek approach to horror is something that could not be at further remove from Carpenter’s films, which all play themselves seriously and are not exactly noted for their comedy element.

That said, when Carpenter gets down to the business of directing the first two episodes, he is back on familiar ground. The first story The Gas Station is classic Carpenter. He creates a reasonable degree of tension with heroine Alex Datcher’s running around, a number of twists and a gory despatch of the psycho at the end. The episode is also accompanied by another of Carpenter’s fine melodic scores.

The second episode Hair is also from Carpenter. It has a certain degree of creepiness, especially in scenes like where Stacy Keach’s hair starts crawling across the floor of the hairdressing salon; when he wakes up to find the hair growing all over his body, including out of his throat; or where he cuts the hair over the bathroom sink and it squeals and then under a microscope is revealed to resemble a long miniature snake. The creepiness of the episode is undone somewhat by a lame twist ending that reveals the hair is all part of an alien invasion plan, something that has been heavily signposted by the name of the clinic – Roswell Hair Laboratories.

For the third episode Eye, Carpenter has handed direction over to Tobe Hooper, one of Carpenter’s contemporaries, best known as the director of The Texas Chain Saw Massacre (1974) and Poltergeist (1982) – see below for Tobe Hooper’s other films. The difference between Carpenter and Hooper, who had slid a long way down as a director in the 1990s, could not be better demonstrated than by seeing their various segments alongside one another. Even though he is not on top form, Carpenter’s creepy suspense in the first two episodes is at marked contrast to Tobe Hooper who throws in random crude shock effects – bodies rising out of the backyard, a severed arm in the kitchen disposal unit, flashbacks with Mark Hamill in a baby’s crib, Hamill finding he is making out with a corpse. The segment even lacks Carpenter’s atmospheric score. The episode emerges as a variant on the oft-filmed The Hands of Orlac (1924) about a possessed transplant limb. The story’s denouement is given away well in advance by the heavy-handed Biblical quotes throughout.

John Carpenter’s films often make references to other genre films and people he has worked with and Body Bags is rich in these. There is reference made in the background to Haddonfield, the fictional location for Halloween. Carpenter also obtains a number of cameos from other genre directors, including Wes Craven, director of A Nightmare on Elm Street (1984) and Scream (1996), as a weird drunken customer during The Gas Station episode; while Tobe Hooper, along with comedian Tom Arnold, appear as morgue attendants at the very end of the film; B movie producing legend Roger Corman turns up as a doctor examining Stacy Keach; Stacy Keach’s character is named Richard Kobritz, a producer who has worked with both Carpenter and Tobe Hooper; while Sam Raimi, director of The Evil Dead (1981), has his photo listed as Employee of the Month in the background of The Gas Station.