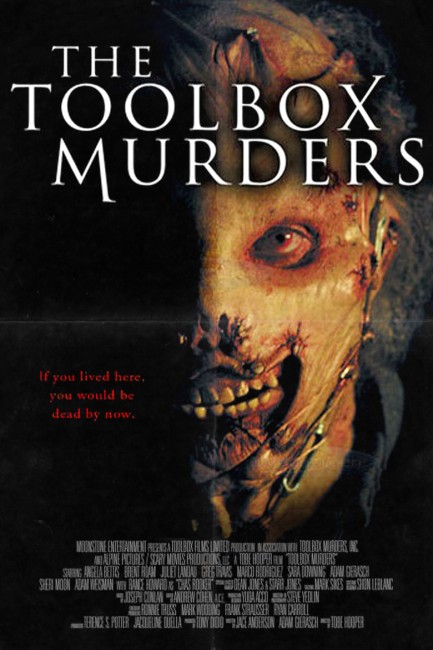 Nell Burrows and her husband Steven move into an apartment at the Lusman Arms. No sooner have they moved in and they are experiencing problems with poor maintenance, strange tenants, noise through the thin walls and renovations being conducted to the building. At the same time, a masked man is stalking the tenants and killing them using various workman’s tools. Nell sees a number of suspicious things but these are dismissed after she calls the police over what she thinks is a violent argument in one apartment and this only proves to be an actor rehearsing his lines. As the murders continue, Nell delves into the building’s past. She discovers that each floor has no Apartment 4 and that the original architect has designed the building with a series of occult symbols that lead to hidden chambers.

Tobe Hooper once made The Texas Chain Saw Massacre (1974). The Texas Chain Saw Massacre is an undisputed genre classic and many consider it one of the most horrific films ever made. Tobe Hooper’s career since then has unfortunately been an uneven one. He tried to repeat the success of Texas Chain Saw with Eaten Alive/Death Trap (1977) and went onto make a number of fair-to-quite good films throughout the late 1970s/early 1980s – Salem’s Lot (1979), The Funhouse (1981), Poltergeist (1982), Lifeforce (1985), the remake of Invaders from Mars (1986) and The Texas Chainsaw Massacre 2 (1986). The last three in particular were slammed by the horror fan contingent, although I am prepared to defend both Lifeforce and Texas 2. Alas, Tobe Hooper’s career throughout the 1990s and up until his death in 2017 became something that even someone who has liked some of his less well-received efforts have found difficult to keep defending. The mediocre-to-dismal likes of I’m Dangerous Tonight (1990), Spontaneous Combustion (1990), Night Terrors (1993), The Mangler (1995), The Apartment Complex (1999), Crocodile (2000), Mortuary (2005) and Djinn (2013) have increasingly become downright sad to watch.

I have not seen the original The Toolbox Murders (1979) but it sounds a fascinatingly sordid film – one review called it ‘reprehensible’ – a slasher movie with almost no plot, concerning a maniac killing women amidst a great deal of gore (something that had it listed as a video nasty in some countries). It reportedly contained an amazingly torrid performance from B movie veteran Cameron Mitchell as the psycho. Tobe Hooper’s Toolbox Murders ditches most of the original, including the villain’s motivation for killing girls over the death of his daughter. The remake also centralises the story in a single location – one apartment building – and adds a confused subplot about the occult construction of the building. Toolbox Murders 2003 is certainly a better-budgeted film than the original, which to all accounts was very cheaply made.

Even if in the end Toolbox Murders 2003 is not a particularly standout film, it does show Tobe Hooper returning to his roots and undeniably managing to recapture something of the brutality of Texas Chain Saw. Hooper does not stint when it comes to blood-letting and there are a series of extremely gory and nasty set-pieces throughout – Juliet Landau getting a power drill in the back of her head; one victim getting the top of their head cut off in the shower with a power saw; another having acid poured on their face. There is a vicious opening sequence where the maniac pops up in a girl’s apartment, bashing her head in with a hammer and we then see him wrenching it out of her skull with clumps of hair attached and splattering blood all over the wall. Maybe Tobe Hooper has been suffering from bad scripts, bad luck, a mid-life crisis or a decade-long state of depression since 1986, but Toolbox Murders does go some way toward showing that he can still be a vital force.

In many ways, Toolbox Murders 2003 could almost be a better version of Tobe Hooper’s earlier The Apartment Complex, a failed black comedy about strange goings-on in an apartment building. Hooper creates a certain effective mood of paranoia and strangeness here – Angela Bettis hearing arguments and noisy lovemaking through the walls, calling the police when she thinks she hears violence only for it to turn out to be an actor rehearsing his lines, sinister figures lurking. Angela Bettis, who gave a marvellous performance in the offbeat May (2002), makes for something more intelligent than the standard blonde heroine, even if the writing of the role is by-the-numbers.

On the minus side, the film tries to add a subplot about the occult symbols and a secret house within the house. These scenes are initially spooky, particularly during Angela Bettis’s entry into the secret area. However, Toolbox Murders, with its talk about occult symbols, an undead killer and Angela Bettis being the destined One, never resolves the occult angle and this element of the film eventually pans out disappointingly. There is an annoyingly clichéd slasher movie twist ending taken from Halloween (1978) where the killer gets back up again after a seemingly fatal fall.