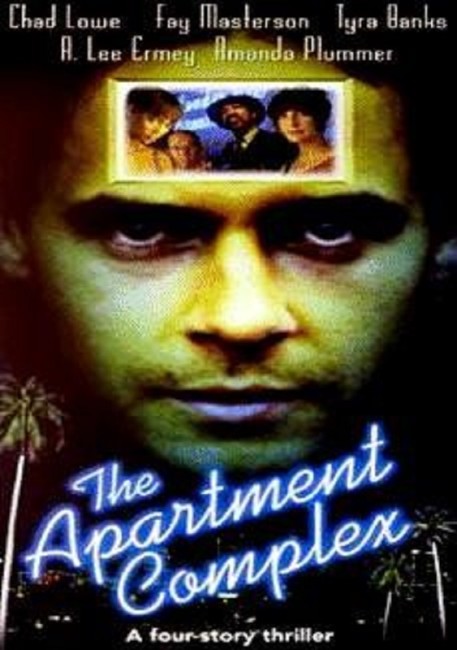 Stan Warden accepts a job as the manager at the Wonder View apartment complex. He soon finds that the apartment is filled with very strange tenants. He then discovers the body of the previous manager at the bottom of the pool but this serves to make him the chief suspect with the police. At the same time, Stan has to deal with an amorous psychic, an escaped python and the psychotic boyfriend of the eminently desirable girl across the courtyard.

Once upon a time Tobe Hooper directed The Texas Chain Saw Massacre (1974), which has gone on to become a genre landmark. For the next decade, Tobe Hooper maintained consistently interesting genre output with the likes of Salem’s Lot (1979), The Funhouse (1981), Poltergeist (1982), Lifeforce (1985) and The Texas Chainsaw Massacre 2 (1986). In the 1990s and beyond however, it has been painful to watch the progressive depths to which Tobe Hooper’s career has sunk. After looking at films like Spontaneous Combustion (1990), the tv movie I’m Dangerous Tonight (1990), Night Terrors (1993), The Mangler (1995), Mortuary (2005) and Djinn (2013), you wonder if the Tobe Hooper that made Texas Chain Saw and Poltergeist has not been replaced by a clone of Edward D. Wood Jr.

The Apartment Complex is a paranoia black comedy in the vein of the sinister apartment dwellers theme established by films like The Tenant (1976), Apartment Zero (1988), Barton Fink (1991), Fever (1999), The 4th Floor (1999), One Point 0/Paranoia 1.0 (2004), Next Door (2005) and 1BR (2019). The script marshals all the right elements – pythons loose in the apartment, an achingly desirable girl with a disturbed boyfriend, a body in the pool, cryptic diaries, two sinister police detectives who suspect the hero of the murder, a physically akilter apartment block with missing room numbers, threatening never-seen tenants, kooky psychics, former CIA agents bugging conversations.

The opening moments where Chad Lowe interviews with apartment owner Obba Babatunde only to find after a tour of the building that Babbatunde is not Dr Caligari at all hits just the right note of strangeness. So too do the Kafka-esque scenes with the two detectives turning everything Chad Lowe says against him and hover over him as his mother rings. The film even makes homage to The Cabinet of Dr Caligari (1919) – the surreal German classic about a sinister psychologist – with the offset camera angles and not quite square-angled sets, as well as a plastic surgeon named Dr Caligari.

As to the rest of the film – oh dear. Tobe Hooper has shown a deft hand with black comedy in the underrated Texas Chainsaw Massacre 2. With The Apartment Complex, he clearly aims for the same tone as Barton Fink – a sense of humour that makes you feel uneasy at the same time you are laughing. However, Hooper misses by a mile and the intended black comedy falls into clumsy farce. The scenes with Amanda Plummer trying to seduce Chad Lowe are embarrassing to watch. Chad Lowe is convincingly geekish and Fay Masterson bewitchingly beautiful, but everywhere else Tobe Hooper allows the farce to proceed as noisy burlesque and the film collapses. Where The Apartment Complex should have been a sinisterly paranoid black comedy, it is just loud farce – with an unbelievable, happy sitcom ending.