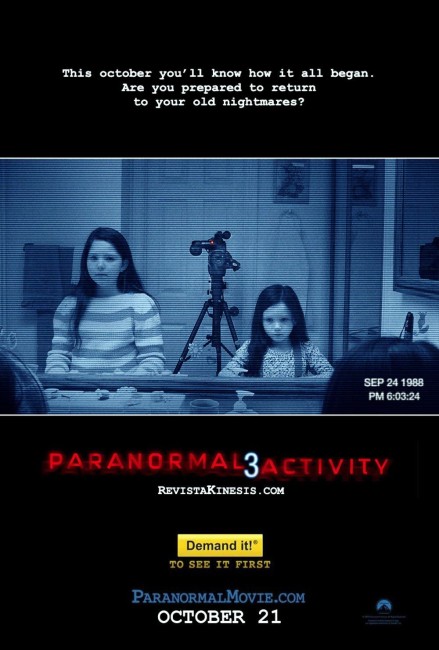 In 2005, Katie Featherston leaves several boxes of videotapes at her sister Kristi’s new house. These contain recordings from back in 1988 when Katie and Kristi were children. Their mother Julie and her boyfriend Dennis had just moved in together. Disturbed by odd and unexplained noises, Dennis, a professional wedding videographer, set up a series of video cameras around the house. These recorded Kristi’s obsession with an invisible playmate she called Toby. Soon however the cameras started to pick up an increasingly sinister series of paranormal happenings.

Paranormal Activity (2007) was a genuine sleeper hit. Made on a next to nothing budget, it succeeded in capturing an audience with its mockumentary approach and eerie scares. It proved to be a box-office hit and was dutifully followed up by Paranormal Activity 2 (2010). Paranormal Activity 3 is a further prequel that goes back to the childhoods of the two sisters and shows the events that started everything off. Katie Featherston and Sprague Grayden make minor return appearances at the very start of the film, while original director Oren Peli is back in the capacity of producer. The new directors this time are the duo of Henry Joost and Ariel Schulman who previously made the internet dating mockumentary Catfish (2010) and subsequently made the zombie film Viral (2016) also for Blumhouse and the social media thriller Nerve (2016).

Here you wonder if the Paranormal Activity people can make things work a third time around. Certainly, the premise that what we are seeing is supposedly a true-life documentary is starting to seem decidedly strained by now, while the idea that at different times three different family members all managed to set up security cameras that recorded paranormal events happening inside their respective house stretches credulity. Not to mention that the time period that this film is set in, 1988, has meant that the mockumentary footage is now supposedly being shot on videotape – while we do see the familiar effects of paused and fast-forwarded videotape during the playbacks, the footage that we are watching up on screen is far too high-definition to be video and has clearly been produced on a digital camera.

All of that said, Paranormal Activity 3 defies low expectation and surprises by producing the goods a third time around – moreover without varying too much from the basics established by the other films. The camerawork is a mix of static security camera footage as in the first film and the handheld camera that was introduced in the second. Each successive film in the Paranormal Activity series seems to take as its mandate to add something slightly different – the idea this time is to introduce a camera mounted on a makeshift swivel converted from a fan. There is the usual unbearable suspense characteristic of the first film as we sit watching the cameras filming a static scene, usually of people sleeping, where we are constantly looking into each corner of the frame waiting for something to move. However, the addition of the swivel camera adds something new – the pans across the width of the living room into the kitchen and then back take about 30 seconds – Joost and Schulman frequently have something spooky happening or about to happen in one corner of the frame, pan away from it to the person waiting unawares on the other side of the room, leaving us to wait with maddening slowness as the camera completes the full length of its path and back to find what happens.

Henry Joost and Ariel Schulman manage to get a number of jumps out of the audience. There are some great scares based around the panning fan camera – like where the camera follows a shape covered in the sheet from the living room across to the babysitter (Johanna Braddy) in the kitchen; or the scene where Lauren Bittner returns to find the kitchen table she just left missing. There are some fine jolts with people being abruptly dragged out of their beds and thrown across the room or Chloe Csengery being lifted up by her ponytail. There is also the game of Bloody Mary that gets a couple of good jolts in – even if the game of saying her name three times in the mirror has been borrowed directly from Candyman (1992) and sequels. (Those paying attention will also note that the trailer features a version of the two girls playing this game that does not take place in the film itself).

On the other hand, while Paranormal Activity and Paranormal Activity 2 were films of slow accumulating dread – they were often about silence and lack of activity and the creepy expectation of something about to happen – Paranormal Activity 3 seems to play out as a more standard horror show (not that it does not engage in slow unbearable silences as well). The first half-hour contains a few too many contrived “gotcha!” moments – Lauren Bittner jumping out of the closet wearing a Halloween mask, Chloe Csengery abruptly appearing after Christopher Nicholas Smith comes out of the cubbyhole, the babysitter waiting to poke her head into the fan camera as it finishes its pan, and especially a number of occasions where ordinary sounds like someone sitting up in bed or opening a door are abruptly amplified. Certainly, these made some in the preview audience scream but also come across as Joost and Schulman going for cheap jumps.

There is also the ending [PLOT SPOILERS] that plays into horror conventions as old as Rosemary’s Baby (1968) and numerous imitators, even if it does have modest affect. I am not entirely sure if the mix of hauntings from the earlier films and devil worship/witchcraft work that well together – they seem very different arenas of horror. More than anything it gives indication that the Paranormal Activity series is a rickety construct that each sequel (even though it comes from the same screenwriters) is adding onto as it goes without any necessary preplanned schema they are working to. The promise of Paranormal Activity 3 was that it was going to go back to the beginning and tell what happened in the two sisters’ childhood. This it does after a fashion even if it never particularly clarifies anything. More so, it uses this as an opportunity to extrude the happenings all over again in a different way. You can take it as an explanation of events as long as you are prepared to accept that it opens up just as many other unanswered ones – and the doorway for the inevitable Paranormal Activity 4.