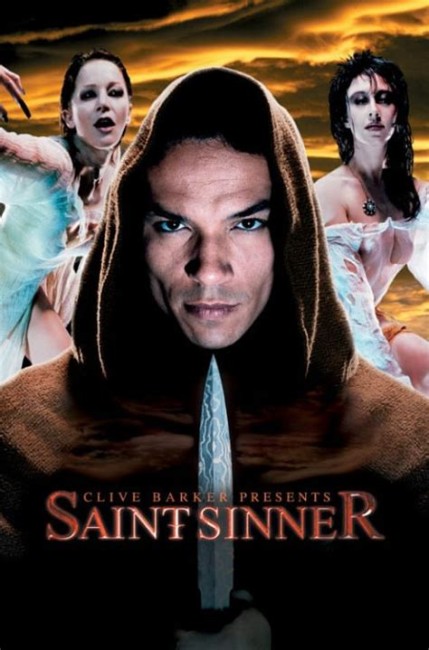 At a monastery on the Pacific Northwest in the year 1815, novice monk Tomas Alcala and his brother Gregory sneak into The Repository where the abbot guards a number of important relics. There they see The Wheel of Time and a ball that contains the succubi Munkar and Nakir that has just been delivered to the monastery by Father Michael. However, Gregory touches the ball and causes the two succubi to return to human form whereupon they immediately vanish through the Wheel. Tomas is charged with going to bring them back. He is given the Dagger of Nicodemus, the only weapon that can kill the succubi, and sent through the Wheel emerging in the present-day. Following the trail of the succubi, he finds a man whose lifeforce they have drained only to then be arrested as the murderer by the police. However, as further bodies pile up, Detective Rachel Dressler comes to believe Tomas’s wild claims and takes a chance so that the two of them can stop the two demon women.

Clive Barker became one of the major voices in horror fiction during the late 1980s/90, in particular after he directed the cult hit of Hellraiser (1987). (See below for Clive Barker’s other films). Saint Sinner was sold as an adaptation of one of his works but after a thorough search of the Barker bibliography I am unable to find any source work it is based on. Further research reveals that is it based on a story idea that Barker gave the producers. Saint Sinner was directed by Joshua Butler who has mostly worked in television – his previous directorial outing was Prancer Returns (2001), for instance. He has made a handful of other genre entries such as Deathlands (2003) and Vlog (2008).

Clive Barker’s stories and films brim over with mediaeval imagery and fascinatingly perverse and monstrous creations. Saint Sinner is what happens when the Barker-esque vision is watered down for television appetites – the film premiered on the Sci-Fi Channel (before it became the Syfy Channel for marketing purposes). It is often a film that is driven solely by weird and moderately outlandish imagery. Joshua Butler certainly serves these up with occasional imagination but he is no Clive Barker.

One of the best pieces of imagery is none of the horror scenes but the very opening image – that of Greg Serano dozing shirtless on a riverbank and slowly eating a scarlet red apple as below he sees a woman bending over the river, her top falling open to reveal her breasts, before he gets up at the tolling of the bell and puts his shirt back on, revealing he is a monk. It’s a beautifully staged scene that toys with sexual temptation, the notion of forbidden desire and of course sets up resonances of the Garden of Eden imagery with its apple. Typical of the film (and for that matter the interesting sounding title), the scene has nothing to do with anything that follows.

The design of the ball with the two enwound bodies and the lavish Wheel of Time are imaginative effects. However, the show does fall down when it comes to the opening of the ball and the two bodies returning to life, where the film is clearly using cut-price digital effects. There’s the bizarreness of the scenes where we encounter the two demon figures in an office that is crawling with bugs where they have a bloated body strung upside down from the ceiling as they feed upon it from an intestinal tube. Unfortunately, the sheer freakishness of the scene is done in by the two actresses (Mary Mara and Rebecca Harrell) who play their parts amid much campy over-the-top eye-rolling and giggling.

Thereafter, Saint Sinner is largely conceived as a string of novelty creature effects – one of the succubi crawling along the ceiling and leaping off onto a man’s back as he is humping the other; a bullet going through the succubi bodies and their bodies then reconstituting; a climactic scene where Rebecca Harrell’s pregnant stomach is torn open by tentacles and the creature inside (a giant bug) emerges and starts devouring her lifeforce.

Unfortunately, the film is never more than the sum of these individual scenes. As narrative, it is a slipshod variant on time travel cliches and the monster hunter conducted with no imagination. It is indicative of the film’s narrative deficiencies that Greg Serano emerges into the present-day without the slightest culture shock at two hundred years difference with the exception of expressing amazement at it being possible to search for information on the internet.

Other films adapted from the works of Clive Barker include:- Candyman (1992), from Barker’s story The Forbidden (1985), featuring a supernatural boogey man, which has produced two sequels; one of the stories in the tv movie Quicksilver Highway (1997); The Midnight Meat Train (2008); Book of Blood (2009) and Dread (2009). Clive Barker has directed three films – Hellraiser (1987), which produced numerous sequels, Nightbreed (1990) and Lord of Illusions (1995). Barker has also written two original screenplays with Underworld/Transmutations (1986) and Rawhead Rex (1987), acted as Executive Producer on Gods and Monsters (1998) and produced The Plague (2006).