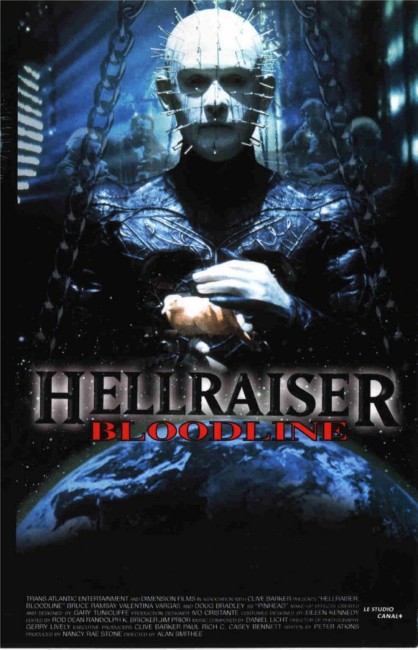 The year 2127. Troops burst into the space station Minos and arrest Dr Paul Merchant, the station’s designer, who has gone crazy and taken over the station. One of the officers sits down to interrogate Merchant who tells how he has created the station “to trap Hell”. Merchant tells her the story of his ancestor Philip LeMarchand, a toymaker in 18th Century France. LeMarchand was commissioned to design a puzzle box for the Duc De L’Isle but then saw De L’Isle use the box to open a doorway to Hell and conjure the demon Angelique. LeMarchand was told that his bloodline was cursed until the end of time for what he had created. In Paris of 1996, LeMerchand’s descendant John Merchant was a successful architect. Merchant came to the attention of Angelique who discovered that he had created an office building based on the designs for the puzzle box. She summoned Pinhead who snatched Merchant’s wife and daughter to make him complete the design that would permanently open up the doorway to Hell. However, Merchant had been experimenting with a design that would eternally banish the Cenobites. As the Cenobites invade the space station, Dr Merchant now hopes to complete the design.

Hellraiser: Bloodline was intended to be the directorial debut of Kevin Yagher. Kevin Yagher is best known as a makeup effects artist, having plied his work on several of the A Nightmare on Elm Street sequels, Trick or Treat (1986), The Hidden (1987) and The Phantom of the Opera (1989), as well as creating the original Chucky doll in Child’s Play (1988). Yagher had made his directorial debut in an episode of tv’s Tales from the Crypt (1989-96). However, after the debacle of Hellraiser: Bloodline, Kevin Yagher has never directed again and his only other credit outside of makeup effects work has been devising the story for and co-producing Sleepy Hollow (1999), which he had originally been slated to direct before it was taken over by Tim Burton.

Alas, Hellraiser: Bloodline ended up in the midst of a war between Kevin Yagher and Dimension Films. Peter Atkins’ original vision of the script had been a much more elaborate one. He had included images of the Cenobites in French period dress and Yagher had designed a bevy of far more elaborate makeup creations. However, much of this was curtailed by Dimension Films who only afforded Hellraiser: Bloodline a medium budget. The main problem seems to have been that Kevin Yagher and Dimension Films heavily disagreed over the structure of the film. Yagher had had the various stories interweaving, rather than being told sequentially. Dimension Films did not like the idea of the series continuing character of Pinhead not being on screen up until about the halfway point and wanted the film rearranged accordingly.

Yagher was unable to resolve these issues and quit before the film was completed and paid the ultimate snub, substituting the generic Director’s Guild pseudonym Alan Smithee in lieu of his own. Dimension Films hired an uncredited Joe Chapelle, director of Halloween: The Curse of Michael Myers (1995) and Phantoms (1998), to shoot the uncompleted scenes, and Rand Ravich, later director of The Astronaut’s Wife (1999), to rewrite the material. This new material would appear to mostly consist of the scenes aboard the space station. The film’s release was held up for a year due to these re-edits. When eventually released, Hellraiser: Bloodline ended up being excoriated by the fans of the series.

For all that, Hellraiser: Bloodline does not emerge as bad as word has it; on the other hand, it is never more than a routine film. Peter Atkins’ script has an ambitiousness in its attempt to create an origin story for the puzzle box and to spread the story out across three eras but the delivery is entirely underwhelming. The French story is so briefly curtailed that one wonders what the point of it was. The present-day episode is the most substantial but even that consists of not much more than running around the building, before the end of the segment where the Cenobites are dispatched in a convenient plotting deus ex machina simply by opening the puzzle box.

Most of all, the Hellraiser milieu was starting to seem hackneyed by this point. The leather fetish/torture chamber look is no longer interesting. Pinhead lacks much threat as a character, his job is simply to stand about and snarl menacingly. The character of Angelique – the Cenobite who attains human form and appears to want to stay human – is potentially interesting, although never gains much of a presence until the present-day episode. Even then, as soon as Pinhead turns up, Doug Bradley quickly upstages the show with that way he lets lines mellifluously rolls off his tongue and Angelique is fairly much forgotten about. What is crucially missing from the film is the dark intensity of Clive Barker original vision – the Cenobite creations are now just generic boogeymen, while all the fascination with forbidden desires has been well and truly excised from the series.

The effects sequences, which were always the highlight of the series, are variable. There is an imaginatively conceived sequence where two twin security guards are melted together. [Incidentally, the twins are played by the Polish Brothers, Mark and Michael, who later became directing-writing team with Twin Falls, Idaho (1999) and genre efforts such as Northfork (2003), The Astronaut Farmer (2006), Amnesiac (2014), 90 Minutes in Heaven (2015) and Hot Bot (2016)]. Other effects sequences are tattier – in particular, the rubbery looking Helldog and a silly robot that looks like the denuded skeletal The Terminator (1984), which has been thrown in early on for no discernible reason.

One of the major problems is that the film looks cheaply produced – the space station sequences, which seem like an attempt to graft Hellraiser together with Aliens (1986), only looks like actors running around in a warehouse, while the French regency segment attempts to do period on an impoverished budget that clearly extends no further than the camera’s narrowed gaze.