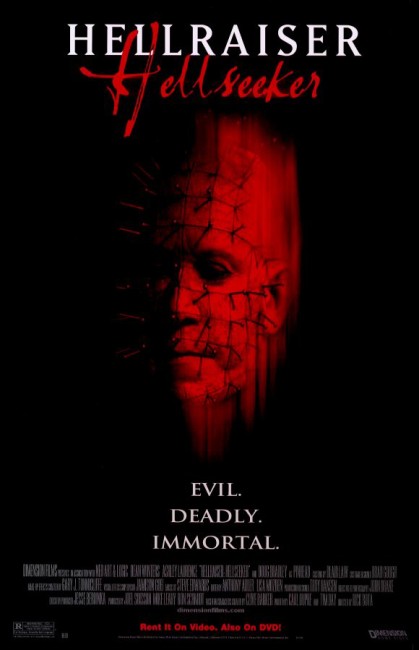 In the midst of a marital argument while driving, Kirsty Cotton and her husband Trevor crash off a bridge in their car. Trevor escapes but sees Kirsty drown trapped inside the vehicle. Afterwards however, detectives are unable to find Kirsty’s body and begin to suspect Trevor of having murdered her. As he recovers from the accident, Trevor finds himself in the midst of a series of baffling reality flips. As he tries to piece together things from the past, various women come onto him but are then found murdered by what he comes to realise are the Cenobites.

Hellraiser: Hellseeker is quite an oddity. It is certainly an attempt to do something decidedly different with the Hellraiser mythos. For the most part, the Cenobites do not even feature in the film and Hellseeker suggests something more akin to the blurring reality shifts of a film like Brain Dead/Paranoia (1989) or a Philip K. Dick work. These reality disjunctions prove rather fascinating.

There is an intensely weird sequence where Dean Winters starts coughing up water and then an eel emerges from his mouth and he is forced to wrestle with it. Or where Winters finds that his video camera is on and when he looks at the viewing screen it is photographing a sex scene but when he looks up, the chair it is aimed at is empty; or where Dean Winters has sex with Jody Thompson, she turns into a bandaged face and he then finds her dead, only to go to the neighbouring apartment and she answers the door but doesn’t know him and he finds another guy is with her; the doctor who does and then doesn’t exist and people ask Winters who he is talking to when he goes to her office.

Or quasi-surreal images like seeing the police brutally beating a subject in the background at the station and this being ignored by all the officers, and the entirely surreal scene where detective William S. Taylor starts talking about how we all have good and evil parts within us and his partner’s head bursts out of his side to show his evil half. The result achieved by these scenes is fascinating. In fact, these reality disconnects take over the film and the Cenobites are almost entirely pushed aside.

Where Hellraiser: Hellseeker falls down is when it comes to introducing the Cenobites. Hellseeker would have worked much more effectively if it were not a Hellraiser film, one suspects. The explanation of what is going on is far-fetched – like the idea that Ashley Laurence’s Kirsty Cotton would glibly reopen the cube after all she has been through and would so easily trade six souls just because her husband cheated on her. Or for that matter, why she would do something as crazy as shoot at a person who is driving the car she is a passenger in. It feels like she has become a character who has been stretched way out of their natural state to be made to fit the story the film wants to tell.

Also the end revelation leaves one wondering how all the reality disjunctions fit into Kirsty and the Cenobites’s grand scheme. Don’t the Cenobites just grab and physically tear people apart, as opposed to distort and turn their realities upside down? Hellseeker also returns somewhat to the interpretation that was offered in the previous film, Hellraiser: Inferno, which saw the Cenobites as representing a personal subjective Hell for corrupt souls rather than being actual figures that had been conjured up. It is an end that turns the whole of Hellseeker into a deathdream fantasy a la An Occurrence at Owl Creek Bridge (1961) and its numerous copies.

Hellraiser: Hellseeker was the directorial debut of Rick Bota who had previously worked as a cinematographer on films such as Tales from the Crypt Presents Demon Knight (1995), Barb Wire (1996), The Glimmer Man (1996) and House on Haunted Hill (1999), among others. Bota went onto direct the next two Hellraiser films, which are much less interesting, and then various work on tv, and has made only one film subsequently with the teen thriller Love Me (2012) and several thrillers for the Lifetime Channel.