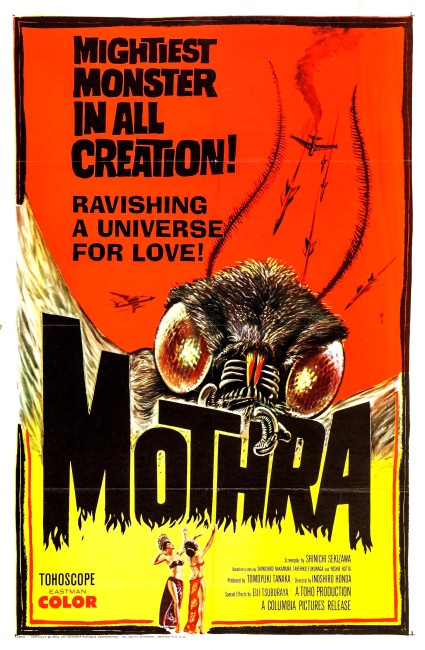 After a ship is wrecked at sea by a typhoon, the survivors are found on an island that was once the site of atomic tests. When asked how they came to be unaffected by the radiation, they say it is because the natives gave them a special juice. The authorities are surprised because it is believed that the island was deserted. The scheming entrepreneur Clark Nelson then announces an expedition to investigate. On the island, Nelson and his team of scientists discover two six-inch tall twin sisters. Nelson captures the twins and takes them back to Japan where he turns them into curiosity exhibits on the stage. Two reporters try to persuade Nelson to heed the sisters’ warnings about the vengeance of the island’s guardian Mothra, a giant-sized moth that is telepathically linked to the twins. Mothra now hatches from its cocoon and heads to Tokyo to rescue its handmaidens, its wings creating vast winds that destroy all in its path.

The Japanese monster movie (the kaiju eiga) had begun with enormous success with Godzilla, King of the Monsters (1954). Godzilla spawned an industry that has included 28 sequels and is still going strong five decades after the original came out. There were a huge number of imitators from Japan and other Asian countries. For a few years after Godzilla, Toho tried to create other screen monsters with the likes of Rodan the Flying Monster (1956), Varan the Unbelievable (1958), Gorath (1962), Attack of the Mushroom People/Matango the Fungus of Terror (1963), Dogora the Space Monster (1964) and Frankenstein Conquers the World (1966).

Mothra was the most successful of these and is the only other Toho film to have spawned its own remakes and sequels. Godzilla still remained Toho’s most lucrative franchise and almost all of the creatures in the above-listed films were eventually pitted up against it. Indeed, Mothra became the first monster from another Japanese film to take on Godzilla in Godzilla vs the Thing (1964). One suspects the reason that Mothra stood out from the other Japanese monsters is that it has more distinctive personality in comparison to any of the other monsters – where Godzilla was a naked force of aggression, Mothra is clearly a more sympathetic feminine force who is identified with nature, with her rampage being more genteel and less intentionally destructive and angry.

Mothra is one of the best Japanese monster movies from the 1950s-70s period and the next best effort that director Ishiro Honda put out after the original Godzilla. While most of the later kaiju eiga towards the end of the 1960s and especially into the 70s descended to cheap effects and became increasingly juvenile in focus, Mothra is one entry that clearly strives to transcend this. The scenes of model destruction with the Mothra larva rampaging across the countryside and then its emergence in winged form are especially good. Most importantly, the special effects scenes are built into a strong story.

At its oddest, Mothra becomes a fairy-tale of the bizarre, where the eye-poppingly attractive Tohoscope colour and the array of exotic dancers, psychedelic jungles and the miniature twin sisters creates a marvellously colourful world all unto itself. The film holds some incredible beautiful images at times – like the emergence of Mothra from its cocoon, spreading its wings and taking to the sky; or a montage that combines the image of the sisters crossing a wire on a model coach with scenes of the Mothra larva duck-diving through the ocean, all scored to the girl’s inhumanly beautiful voices. Even the depiction of a bombing run becomes something magnificently lyrical.

The underlying metaphor is of course the same old atomic bomb fears that informed Godzilla. The country of Rellisica in the story becomes a thinly disguised stand-in for the US, something that is even further emphasised by the inserts shot for the English-language print that clearly include American freeways. (In the original Japanese print, Rellisica was meant to sound like a combination of Russia and America). One can notice a decided uneasiness in Japan’s viewing of US relations – Rellisica seen as wielding both a sinister economic influence over Japan and yet comfortingly able to step in with military aid at a moment’s notice.