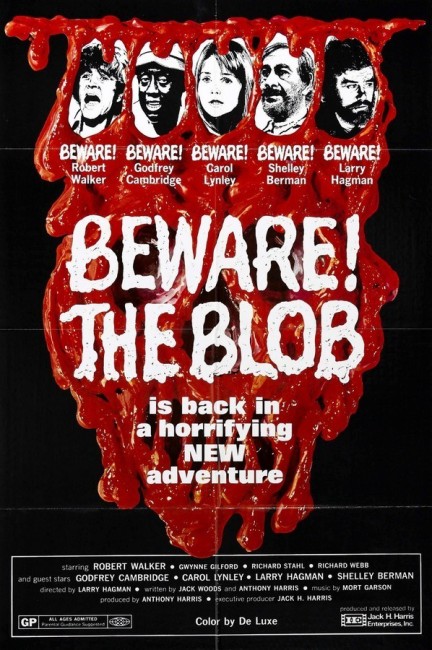 aka Son of Blob

Chester Hargis returns from working on the Alaskan pipelines with a frozen sample. What he does not realise is that this a piece of The Blob. The sample soon thaws out and moves around the town devouring people, growing in size every time it does. Bobby Hartford and Lisa Clark try to alert people to the threat but are not taken seriously.

The Blob (1958) was one of the classics of 1950s cinema. Even if it was not a particularly good film, The Blob seemed to have a quintessential cheesiness that perfectly embodies 1950s science-fiction cinema. Over a decade later, producer Jack H. Harris made this sequel.

Perhaps the greatest footnote that Beware! The Blob has in history is that it was the one and only directorial outing of actor Larry Hagman. At the time that he made Beware! The Blob, Larry Hagman was only a minor actor best known for tv’s I Dream of Jeannie (1965-70) but would attain fame a decade later as the wonderfully despicable J.R. Ewing in tv’s primetime soap Dallas (1978-91). Following Hagman’s fame in Dallas, Beware! The Blob was re-released in 1982 with the rather witty byline “the film that J.R. shot”.

There are substantial differences between both The Blob and Beware! The Blob. The original tapped into the rock’n’roll generation and their resentment at not being taken seriously by adults. The teens here however belong to the hippie era. The 50s teens just wanted to be accepted and understood by adults for who they were, while these teens are openly anti-authoritarian. Amusingly, the teens in the 1950s are hounded for joy-riding in their cars; here the cops aren’t concerned about them joyriding, they are pursued because they are thought to be smoking dope.

The most notable difference between the two films is that Beware! The Blob plays it all as a comedy where the original, laughable as it has often been perceived as being, took itself seriously. Beware! The Blob came out just when the genre parody was beginning – the next few years saw the likes of Flesh Gordon (1974), The Phantom of the Paradise (1974) and The Rocky Horror Picture Show (1975).

Alas, Larry Hagman has little idea of directing comedy. The initial scenes are aimless. The cast seem to be running around doing whatever they feel like – the most embarrassing being a young Gerrit Graham in a gorilla suit – and the result is a whole lot of shapeless and unfunny scenes without a plot or for that matter even a structure holding it together.

The film does pick up somewhat in the second half where the blob gets to full size and Hagman generates some tension running around the ice rink and so on. Ironically, one might note that Beware! The Blob fails to work where the original did – in the build-up – and contrarily manage to works in all the places the original didn’t – convincing effects and suspense – once the blob gets to full size.