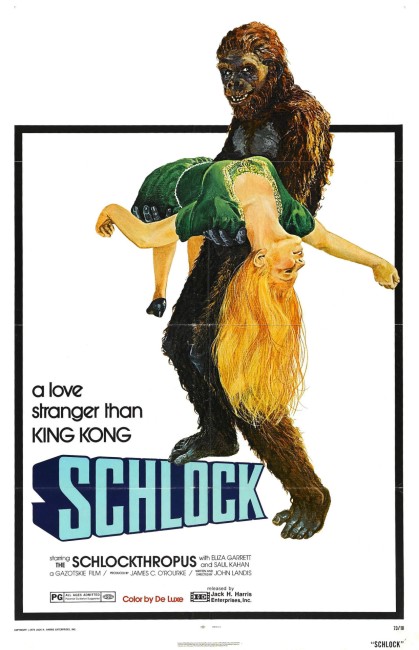 There is panic in Los Angeles over what has been termed the Banana Killings where large numbers of people are being killed and banana peels left at the crime scene. After discovering a cave on the hillside, a group of students are attacked by an ape creature. Police gather and it is determined that they are dealing with a prehistoric Schlockthropus, which is believed to be the Missing Link between human and ape. The Schlock wanders through the city as the police try to find it. It then falls for blind girl Mindy Binerman who thinks that she has befriended a stray dog.

Schlock was the first film made by John Landis. Landis was twenty-two at the time and had been working as a mail boy at 20th Century Fox, before obtaining a job as an assistant director on Kelly’s Heroes (1970). He took similar low rung jobs for a number of years, before persuading family and friends to help out and raise a $60,000 budget to make Schlock. The film was picked up by distributor Jack H. Harris but was not a widespread success.

It took Landis several years before he was able to net another directorial assignment with the wacky comedy anthology Kentucky Fried Movie (1977). Landis then had a string of hits with the original frat rat comedy National Lampoon’s Animal House (1978), the cult The Blues Brothers (1980) and the influential horror comedy An American Werewolf in London (1981). Landis’s run of success came apart with the manslaughter charges laid against him over the fatal accident on the set of his segment of Twilight Zone – The Movie (1983). Even though he was eventually acquitted of the charges, the rising star he had in the early 80s was never quite the same again. He has subsequently made a string of amiable but safe comedies with the likes of Trading Places (1983), Into the Night (1985), Three Amigos (1986), Coming to America (1988) and Oscar (1991), before ending the decade on indifferent fare like Beverly Hills Cop III (1994) and Blues Brothers 2000 (1998). Landis has petered out as a directorial force since the late 1990s, having only made a single film since 1998 with Burke & Hare (2010), which went to dvd in most places. (See below for John Landis’s other genre works).

With Schlock, John Landis has set out to parody the revived caveman premise of films like Dinosaurus! (1960), Eegah (1962) and Trog (1970). As such, it was one of the first genre parodies that were just starting to gain life around this time with efforts like Flesh Gordon (1974), The Phantom of the Paradise (1974), Young Frankenstein (1974) and The Rocky Horror Picture Show (1975). Landis’s films are often playful and spend a great deal of time in-referencing his favourite films – in the anthropological speculation about the Schlockthropus, Landis manages to namedrop King Kong, Godzilla and a scientist named Dr Heywood Floyd – the name of the character who travels to The Moon in 2001: A Space Odyssey (1968).

Landis frequently parodies scenes from other films – there is a scene with the Schlock and a little girl throwing bread to the ducks that is clearly a spoof of the scene between Boris Karloff and the little girl in Frankenstein (1931). There is an amusing parody of the scene in 2001 where the bone is thrown in slow motion by the apes with the Schlock throwing a bone through a glass window to steal some bananas. The end of the film is a parody of the climax of King Kong (1933) – albeit where the Empire State Building is reduced to the roof of a supermarket – a scene where Landis manages to sneak in not only the famous “‘Twas Beauty killed the Beast” line but also “love means never having to say you’re sorry” from the recent hit Love Story (1970).

There is an amusing scene that perhaps goes on far too long with the Schlock invading a cinema, sitting watching a movie, eating popcorn and so on. What makes this doubly amusing is that the theatre is showing The Blob (1958) and Dinosaurus!, which turns it into a clever meta-monster movie scene – where a monster in effect invades a theatre to sit and watch a scene up on the screen where the monster (The Blob) invades a theatre. Furthermore, with the inclusion of Dinosaurus! the ape, who is intended as a parody of the revived caveman in that film, in effect sits watching his own source of inspiration. (It may also have something to do with Jack H. Harris, the producer of both The Blob and Dinosaurus!, also being the producer of Schlock).

Landis’s tone is often an absurdist slapstick that sometimes crudely harkens back to the silent era. In a typical example, police officer Joseph Piantadosi is playing with a cigarette lighter and in the next scene we see the police captain (Saul Kahan) with a blackened face. As became evident in The Blues Brothers, Landis loves scenes with slapstick cop car chases and includes several here with cop cars racing back and forward in different directions.

Nevertheless, the film has a considerably more sophisticated wit than most of this. The continuing gag throughout is that people keep mistaking the Schlock for something human – in the opening scenes as it passes through the crowds, it is mistaken for a hippie and told to get a job and cut its hair, is even interviewed by a tv news camera crew. Particularly amusing are the scenes where blind girl Eliza Garrett treats it as a dog and insists on throwing a stick for it to fetch.

The nonsensical absurdity of the film is watching the ape creature do normal everyday things – playing a piano duet, going to the movies and eating popcorn, throwing bread to ducks, sitting on the curb and sharing a cake it has taken with two kids and a stray dog that wanders along. The silliness has a rather appealing charm to it. The Schlock is a fine makeup job from a young Rick Baker – it was only Baker’s third screen credit. Landis also plays the role of the Schlock and does a convincing job of miming ape behaviour.

There is also, as is often the case in Landis’s films, a substantial cast line-up of people with regular genre backgrounds – Landis constantly pays tribute to people he admires by casting directors and other genre figures in small cameos in his films. These here include John Chambers, the makeup artist who created the apes on Planet of the Apes (1968) and sequels as a National Guard captain; Forrest J. Ackerman, the editor of the influential Famous Monsters of Filmland (1958-82) and a huge collector of memorabilia, who makes one of the first of his numerous cameo appearances as the man in the theatre whose popcorn is eaten by the Schlock; while Donald F. Glut, longtime fan, comic-book writer and author of novelisations and genre movie books, also makes an appearance in the theatre scene.

Another amusing gag is the film See You Next Wednesday that is frequently referenced throughout as being on tv, screening at the theatre and so on (and turns up in almost every one of Landis’s subsequent films). Here it rather amusingly becomes everything from a drama about missionaries and lepers to, according to the posters in the theatre lobby, both a Western and a monster movie.

The encounter between the Schlock and the blind girl:-