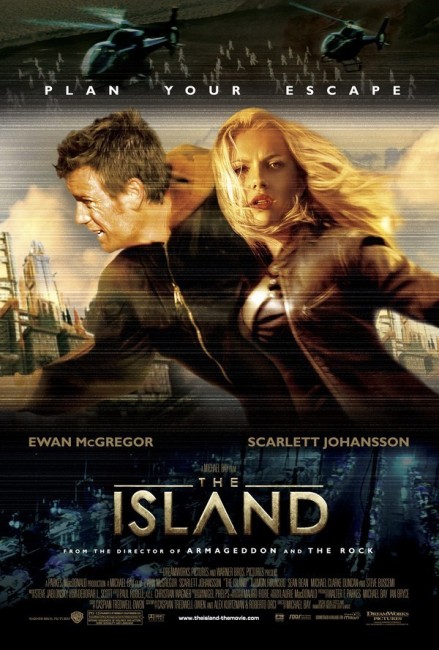 2019. Lincoln Six Echo is one of several hundred people who live a carefully ordered life inside a shelter protected from the world outside, which has become contaminated in a disaster. A lottery is regularly held in which a lucky winner is chosen to be taken to The Island, the last uncontaminated place on the planet. Lincoln starts to question his existence. The discovery of a butterfly makes him realise that the outside world is maybe not contaminated after all. He sneaks into another part of the complex where he is shocked to find that the people chosen in the Lottery are not being sent to The Island but harvested for their organs. When Jordan Two Delta, a woman he has befriended, is chosen in the next Lottery, Lincoln instead escapes into the outside world with her. There they discover a world that is uncontaminated and completely bewildering to them. As they uncover the nature of their existence – that they are clones that have been created to provide spare parts organs for wealthy clients – they are pursued by a heavily armed detachment sent from the laboratory to eliminate them and prevent the world ever discovering they exist.

In some parts of Hollywood and in a great many critical circles, director Michael Bay is synonymous with the worst type of over-the-top no-brain excessive action blockbuster. Michael Bay has to his credit the likes of Bad Boys (1995), The Rock (1996), Armageddon (1998), Pearl Harbor (2001) and Bad Boys II (2003), films that seem designed to pack in a maximum number of one-dimensional heroics, explosions and CGI effects sequences. Pearl Harbor is regarded as one of the worst empty-headed overindulgent flops in recent Hollywood history – it even gets an entire song devoted to its awfulness in Team America: World Police (2004). Michael Bay did subsequently redeem himself with the huge success of Transformers (2007), followed by business as usual with the sequels Transformers: Revenge of the Fallen (2009), Transformers: Dark of the Moon (2011), Transformers: Age of Extinction (2014) and Transformers: The Last Knight (2017).

The Island – which should not be confused with the Peter Benchley pirate movie The Island (1980), a film that might have been well suited to Michael Bay’s hands – seems to be a promising film at the outset. There is an interesting premise – of clones reaching a gradual awareness that the world they live in is a lie and that they have been produced to be harvested for their organs. This idea was first conducted in the little-seen The Resurrection of Zachary Wheeler (1971) but the film has even more similarities to Parts: The Clonus Horror (1979) from which The Island has photocopied the plot almost scene-for-scene. [In fact, the creators of Parts: The Clonus Horror sued Michael Bay and co, eventually reaching an out-of-court settlement].

Michael Bay sets this scenario up passably well and to their credit, the screenwriters draft it as a reasonably plausible scenario. It is just that the film quickly falls into a horde of dystopian clichés:– the antiseptic white world where everybody wears the same uniform and sex and human contact is forbidden – THX 1138 (1971); the innocents sheltered in a prison away from the outside world – The Damned (1963); the populace being killed off while being fed myths about going on to a paradise-like existence – Logan’s Run (1976); the people waking up to an awareness that the world they live in is an artificial hermetic existence – THX, Logan’s Run and countless others; the two forbidden lovers on the run – Nineteen Eighty-Four (1949) on through.

The film makes a reasonably impressive attempt to depict a future world. There are some excellent sets, some nifty pieces of gadgetry and futuristic vehicles and fine cityscapes of a future L.A. with buzzing overhead train lines (although one kept wondering how they managed to keep the entire weight of a train essentially suspended on a telephone wire. Much of the effectiveness of the vision of the future is also undone by a number of blatant product placements for MSN, Nokia, Amtrak and NBC). The mix could have made for a modestly effective film – and subsequently the excellent Never Let Me Go (2010) took an identical premise and conducted it with subtle unfolding surprises the way it should have been done here.

Unfortunately, The Island is sold in such a way that ensures any conceptual element it might have held is entirely negated. The collection of surprises that the film has on offer – that The Island is a lie, that the people are clones – have been given away by the trailer and publicity campaign. If the publicity machine had made more concerted effort to hide the surprises, we could have ended up with a potential worthwhile conceptual twist film – maybe something akin to Open Your Eyes (1997) or The Village (2004) – that kept its audience off-guard with its surprises.

However, the potential of The Island is killed by it simply being a Michael Bay film rather than a smaller budgeted conceptual science-fiction film. It is more than readily apparent that as soon as Michael Bay gets the film out of the laboratory and into the real world, the only level he is interested in telling it on is one that involves fast cars, shootouts, explosions and above all copious mass destruction. The entire middle of the film gets taken over by scenes of helicopters buzzing through prettily photographed golden skies; various shootouts and high speed car chases; set-pieces with vehicles rolling and blowing up as Ewan McGregor dumps giant metal bolts onto a freeway; a flying jet bike whizzing through the skies and crashing right through an office block; Ewan and Scarlett Johansson hanging onto a sign on top of a skyscraper as it teeters, impacts on a helicopter and crashes to the ground; and a climax with a giant fan exploding through the laboratory complex.

All this mass destruction becomes quite glutinous in Michael Bay’s wastefully expensive excess. Moreover, it is something that approaches almost complete fantasy in its ability to have the leads and everybody else except the bad guys survive the extraordinary carnage without being hurt. Certainly, what might have started out as a semi-interesting dystopian scenario is by the end entirely buried by the sheer pornographic excess of Michael Bay’s determination to inundate the film in the mindlessly spectacular.

The Island is not dissimilar to the somewhat better Arnold Schwarzenegger vehicle The 6th Day (2000). Both have heroes coming to the awareness that they are clones; both use the premise as the basis of an action chase film; and both feature backgrounds where the filmmakers delight in dressing the film with futuristic detail. Both films also come with a conservative political agenda as regards cloning. Indeed, The Island is no less than a literalization of the Right to Life side of the stem cell debate – the belief that harvesting embryonic (unformed) human cells for medical purposes constitutes the murder of the unborn.

The Island extends the idea to have the unborn cells brought to full maturation and improbably allowed to be grown to full consciousness (although, I am not sure why the film requires bringing the surplus bodies to consciousness and even things like teaching them how to read. For that matter why does it see the need to create facsimiles of people who are middle-aged – the age of the donor makes no difference to organ transplant, the only question is the health of the organs and in that case surely younger organs are much more desirable than aged ones?). The film wields a good deal of outrage against the notion of creating surplus bodies for harvesting organs and clearly champions the humanity of those being used for that purpose.

There is also a scene where Sean Bean’s evil doctor lies and says that the clones are not brought to consciousness, during which he throws up the phrase ‘persistent vegetative state’. This was a term that came to the fore during the Terri Schiavo Right to Life debate a few months before The Island came out where the entire US seemed split down the middle over whether a woman who had remained in a comatose state for several years should be allowed to die or not. Of course, in so doing, The Island throws its side in with the Right to Lifers, clearly implying that the persistently vegetative are living, breathing and feeling people and even goes so far as to suggest that their having been dismissed as brain-dead is a lie created by an unfeeling medical fraternity.

Alas, in either case – its attempt to appropriate the debates about stem cell research and medically assisted mercy killing for the comatose – The Island fails to make any real arguments and simply seems to assume that by casting the side of the unborn/persistently vegetative with handsome stars that an audience’s natural sympathy with heroic characters will suffice instead of any discussion of the ethical issues. Unfortunately, any outrage that The Island might have presumed to hold on the issue has been drowned by the thunderous overkill of Michael Bay’s direction.

In release, The Island ended up being a financial flop. Michael Bay had the poor taste to blame this on the “unconvincing accents” and acting ability of leads Ewan McGregor and Scarlett Johansson, while failing to accept any blame for his vastly greater own sins.