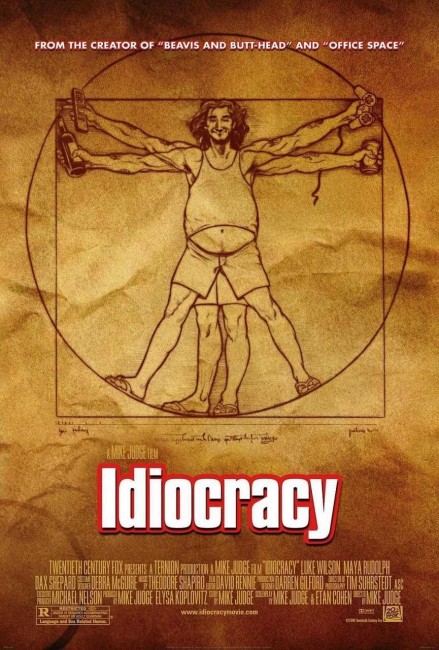 2005. Because he is the most average person in the army, librarian Joe Bauers is selected to be the subject of an experiment to cryogenically freeze a soldier for one year. Chosen as the female subject is the prostitute Rita, although she tells Joe that she is an artist. After they are frozen, the head of the experiment is arrested on corruption charges and they are forgotten about. Over the next few years, the average intelligence of humanity plummets due to the ability of the stupid to vastly outbreed the intelligent. In the year 2025, the garbage has piled so high it collapses in an avalanche. Swept along amid this is Joe’s pod, which is propelled through an apartment window, reviving him. Joe is bewildered to find himself in a future world dominated by corporate franchises where everybody is an idiot. He is arrested and jailed for not having a credit tattoo. After he is found to be the most intelligent man in the world, he is employed as an advisor to The President where is then expected to solve all the world’s problems.

Idiocracy was the third film from Mike Judge. Mike Judge is best known as the creator and the voice of the two lead characters in MTV’s subversive animated series Beavis and Butt-Head (1993-7). Judge oversaw the two characters’ film outing Beavis and Butt-Head Do America (1996) and then went onto direct original live-action material on cinema screens with the sharply barbed Office Space (1999), followed by Idiocracy and the subsequent Extract (2009). Judge has also acted as executive producer of tv’s King of the Hill (1997-2009) and performed the voice for the lead character Hank Hill and created the subsequent live-action Silicon Valley (2014-9).

Idiocracy was a flop when it came out. 20th Century Fox apparently hated the film and only released it to 130 theatres in seven US cities with almost no promotion. (There is much speculation that the reasons for this are due to the outspokenly conservative 20th Century Fox disliking Mike Judge’s vitriolic attacks on American consumerism). The film has however gained a modest cult afterlife on dvd and via revival screenings. Mike Judge co-writes with Etan Coen (no relation to Ethan Coen of Coen Brothers fame) who also wrote a number of episodes of Judge’s animated series and the subsequent screenplays for Madagascar: Escape 2 Africa (2008), Tropic Thunder (2008), Men in Black 3 (2012) and Holmes & Watson (2018), before making his directorial debut with Get Hard (2015).

Mike Judge and Etan Coen borrow the essential premise of H.G. Wells’ When the Sleeper Wakes (1899), of the man from the present waking up in the future, which has fuelled a number of science-fiction stories from Buck Rogers to Planet of the Apes (1968), Late for Dinner (1991), Forever Young (1992), Demolition Man (1993) and the closest work to where Idiocracy lands, Woody Allen’s Sleeper (1973). (For a more detailed overview of the theme see Films About Cryogenics and Suspended Animation).

Idiocracy is a satirical future. The opening illustrates with alarming plausibility how the stupid manage to outbreed the intelligent and take over the world, in so doing dumbing down the average American I.Q. It is amusing watching some of the background portraits of such a low I.Q. future. People watch The Masturbation Channel and The Violence Channel where one of the most popular shows is Oh! My Balls, wherein America’s Funniest Home Videos (1990– ) is perpetually played out as we watch a man being whacked and slammed in the nuts. Luke Wilson goes to hospital and the receptionist struggles to find a diagnosis on a panel of buttons where everything is registered in simple cartoon figures.

Some of Mike Judge’s best satiric targets are reserved for current corporations, which are seen as having taken over the country. Luke Wilson wants to stop in at Starbuck’s – “We haven’t got time for a handjob,” Dax Shepard says, and later we see Starbuck’s and other franchises serving sexual favours. They wander a giant Costco that stretches to the horizon – “Yeah, I went to law school here,” comments Dax Shepard. Even the Secretary of State introduces himself: “I’m the Secretary of State brought to you by Carl’s Jr.” There is an amusing subplot about how the Brawndo corporation ended up banning water because it was a competitor to sales for their energy drink and as a result crops are dying because they have been sprayed with the energy drink.

The only complaint about this as a satiric visions is it falls into the old ethnocentric science-fiction dictum that America equals the whole world where American lifestyle is seen as having been adopted by the entire planet and there are no alternatives to this. While Idiocracy is a perfect satirical escalation of contemporary America, it strains credibility to think the rest of the world would follow suit.

Films about stupid people have a tendency to come off seeming only stupid – think of Dumb and Dumber (1994), most of the films of Will Ferrell and Pauly Shore and the genre likes of Morons from Outer Space (1985), Spaceballs (1987) and Mom and Dad Save the World (1992). Idiocracy survives better than most of these, largely by keeping its satiric focus and not letting its laughs fall down to the dumb moron-level yocks that many of these others do. There is a precious line that Idiocracy staggers at times – Mike Judge’s satiric targets are sometimes crude and raucous but the film is sharply on the ball for the most part.

Luke Wilson works effectively as a straight man, while Dax Shepard gets the slow-witted role he is cast in down pat. Mike Judge’s effects team do a fine job of modestly depicting a decayed America.