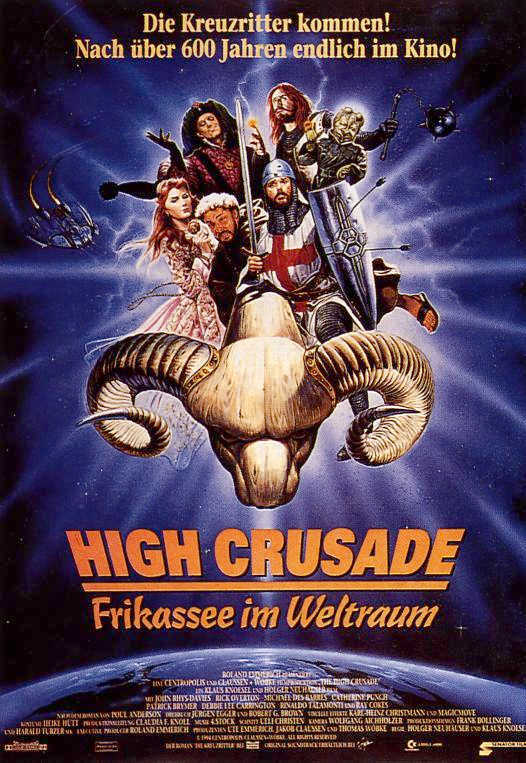 In the year 1345, a scoutship of invading Wersgoraxians lands outside the castle of Sir Roger of Jerryngham just as he is about to marry the Lady Catherine. Sir Roger leads his motley team of knights in an attack and they capture the spaceship. Taking the single surviving alien Branithar hostage and teaching it English, they determine to fly to Jerusalem to join the Crusades. Instead, Branithar takes them to a Wersgoraxian outpost on the planet Tharaxian. There, more by accident than anything else, the Crusaders end up at war with the Wersgoraxians, where their crude methods surprisingly succeed in holding their own against the aliens’ superior technology.

The film is adapted from The High Crusade (1960), a novel by well-known science-fiction Poul Anderson. The significant difference is that Poul Anderson’s novel is a serious adventure story. However, the film abandons most of Anderson’s novel except the bare concept and plays it as lowbrow farce. Perhaps the reason for this can be seen in the huge continental success of the then recent French comedy The Visitors (Les Visiteurs) (1993). The Visitors centred around a duo of filthy time-travelling Mediaevals wreaking havoc on the modern world. Thus The High Crusade sets a group of filthy and very stupid Mediaevals loose in outer space. There is some potential to the idea, even when played as a comedy, and you can see it in the script in places where the Mediaevals’ bumbling succeeds in overcoming the technological sophistication of the aliens or where advanced technology is amusingly interpreted through a Mediaeval worldview.

Unfortunately, directors Klaus Knoessel and Holger Neuhauser play everything as loud and noisy burlesque with people taking pratfalls and doing silly things while mugging to the audience in loud voice. The worst offender here is the habitually over-the-top Michael Des Barres who plays a French seducer with an outrageously fake accent. There is an excruciating sequence playing off Patrick Bryner and the captured alien having sex with their fingers. In one incredibly idiotic moment, Rick Overton is instantaneously cloned – right down to his suit of armour.

Amidst the moronicism, John Rhys-Davies holds up with dignity and Rick Overton’s affected English pomposity comes off affably. It is sad that the film ends up a flop as The High Crusade could have made for a fine science-fiction adventure film or even a witty comedy. The film on show here however is not it.