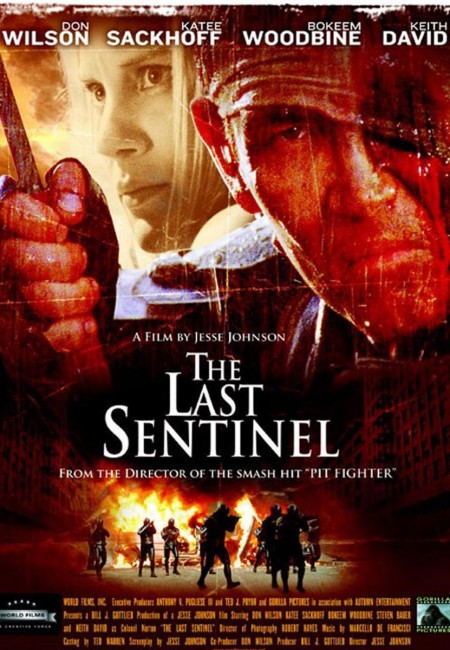 In the future, order is maintained by android police drones. Tallis is one of the electronically augmented EE-700s who have been raised since youth to be soldiers. The rest of his unit has been wiped out in a firefight with the police drones. With the aid of the A.I. in his rifle, Tallis wages a one-man war against the drones in the ruins of a city. A rebel militia group are eliminated by the drones nearby but Tallis rescues one girl survivor. He grants her shelter and tends her wounds. A slow friendship grows between the two of them. She asks Tallis to teach her how to fight and together the two of them wage their own war against the drones.

Don ‘The Dragon’ Wilson was a World Kickboxing Champion who developed a modest career as an action star down the B-movie end of the market throughout the 1990s, appearing in the likes of Bloodfist (1989) and sequels, Ring of Fire (1991) and sequels, Cyber Tracker (1994) and Virtual Combat (1995), among others. Wilson’s career started to slow down in the 2000s. By the point of The Last Sentinel, when he was in his mid-fifties, Wilson was starting to look past his lithe action hero heyday. Notedly, he is now billing himself far more anonymously as just Don Wilson – so much so that I didn’t even realise it was his name when it came up on the opening credits until I saw his face and went “Wait a minute isn’t that ____?”

The Last Sentinel was the fourth film from Jesse [V.] Johnson who usually works as a stuntman with credits on films going all the way back to 1990s, including work on some quite high profile titles. Johnson has made a variety of low-budget films all in the action field, although his only other genre film has been Alien Agent (2007).

Jesse Johnson is fascinated with military combat – so much so that The Last Sentinel is essentially 93 minutes of combat scenes. These go on and on – an endless parade of guns shooting, things exploding, people ducking for cover. Oh wait, scrub the last one – for all that The Last Sentinel is shot to feel like it is a film that takes place in the furious heat of street warfare, both Don Wilson and Katee Sackhoff do eminently daft things like stand out in the open with no cover as people are shooting at them en masse where they seem to have miraculous ability to remain undamaged.

In other words, this is a film made by people who love the fantasy of warfare, the movie version of it, not the realistic thing that might involve hiring combat advisers to criticise the credibility of their moves. The stupidity of people’s actions causes the credibility of the combat scenes to evaporate in the first few minutes. As the film consists of little other than these military scenes, it is an exercise in tedium after that point. “Oh look, the 354th scene where something blows up or people start shooting at each other.”

In terms of science-fiction, The Last Sentinel feels completely generic. Every element is recycled. Don Wilson as the emotionally dead cyborg soldier and the friendship that develops between he and Katee Sackhoff has essentially been recycled from Soldier (1998). The machines hunting people in the future feel recycled from The Terminator films, The Matrix (1999) and a host of copies – even then it is not clear whether the drones are machines or what. At the climax, Don Wilson fights the drone leader who removes his helmet to reveal a human face, although has a mechanical body when he is stabbed.