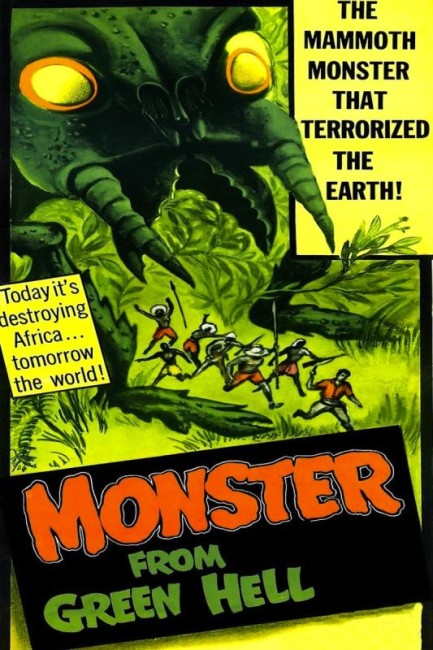 Dr Quent Brady and Dan Morgan oversee an experiment where various animals are launched into orbit in a rocket to test the effects of cosmic radiation on living creatures. However, the rocket goes off course and undergoes exposure to radiation for 40 hours instead of the intended 40 seconds, before crashing in Africa. Soon after, giant radiation-mutated wasps emerge and begin attacking. Brady and Morgan travel to Africa and mount an expedition into the area known as Green Hell. The journey is beset by many problems but eventually they make their way to confront the menace of the wasps that have grown to the size of small houses.

Monster from Green Hell is an entry from the heyday of the 1950s cycle of giant-sized (usually atomically-enlarged) bug movies. This was started by the quite serious and well made Them! (1954) and followed by the likes of Tarantula (1955), Beginning of the End (1957) with its giant grasshoppers, The Black Scorpion (1957), The Deadly Mantis (1957), Earth vs the Spider (1958) and Mothra (1962), among others. Monster from Green Hell turns to the idea of giant-sized, radiation-enlarged wasps.

Monster from Green Hell has some minor novelty in that it is one of these few giant insect films that doesn’t feature atomic radiation as the cause. Coming at the latter end of the cycle, it turns away from A-bomb fears and delves into a near fear – The Space Age and the era of Sputnik – and has the insects enlarged by cosmic radiation following a test launch into orbit. The other interesting thing it offers is that it is one of the few of these entries not to be set on US soil and ventures to Africa. It is possible here that the film was taking some inspiration from the fine (normal-sized) killer ant film The Naked Jungle (1954). The term ‘green hell’ is lifted from the earlier jungle adventure film Green Hell (1940), although that was set in South America whereas here Green Hell is said to be in Africa.

It soon becomes clear that the African locations having nothing to do with finding an interesting new venue for a monster movie and everything to do with the filmmakers making a film on the cheap by filling it with footage from other African adventure films. Indeed, a substantial portion of Monster from Green Hell is filled with this stock footage, including all the scenes of natives rioting, animal stampedes, villages burning, floods and the climactic volcanic eruption. Certainly, all of the dramatic scenes in the film have been cannibalised from elsewhere. At various points, the actors in this film are outfitted in clothes resembling the ones worn by the people in the other footage so as to make us think that it is them.

On the other hand, the new material that Kenneth G. Crane has filmed to fit around the stock footage is exceedingly crude. In fact, for all that Monster from Green Hell is supposed to be about battling giant wasps, the wasps don’t appear that much and the majority of the show is taken up with the journey through the African landscape ie. most of the film concerns not the wasp menace but the journey to encounter the wasps. Even then, the wasps are disposed of not by some ingenious solution that the heroes mange to dream up but yet more stock footage of a volcanic eruption. Indeed, the climax of the film is nothing at all to do with the heroes fighting wasps but their attempts to find their way out of a warren of caves after a grenade thrown at a wasp causes the entrance to collapse.

The giant wasp scenes feature some of the worst effects of the era. One of the funniest of these is their first appearance when something that looks about the size of and with all the manoeuvrability of a zeppelin appears over a hillside, poorly optically inserted in over the stock footage of panicking natives. We then see a montage of shots with the wasp supposedly rampaging across various African scenes where the credibility of these scenes is completely destroyed by the fact that some of the original footage is shot in widescreen aspect ratio meaning that the giant wasp appears to be rampaging against an anamorphic landscape.

There is an even funnier scene where we are in the laboratory and the two scientists (Jim Davis and Robert E. Griffin) are conversing while there appears to be a desert landscape and a car parked outside the window – only the back-projection has been miscalculated and it looks like the car is parked on an angle halfway up the wall and about twice the size of a normal car.

Director Kenneth G. Crane later went on to direct the US inserts for Ishiro Honda’s Abominable Snowman film Half-Human (1955) and co-directed the two-headed man film The Manster (1959). This was also one of the films produced by Al Zimbalist, who oversaw a number of other Z-budget efforts from the era including Cat Women of the Moon (1953), Robot Monster (1953), King Dinosaur (1955), the Denny Miller Tarzan the Ape Man (1959), the King Solomon’s Mines sequel Watusi (1959), and the Jules Verne adaptation Valley of the Dragons (1961), the latter three of which were also heavily based around the recycling of footage from other films.