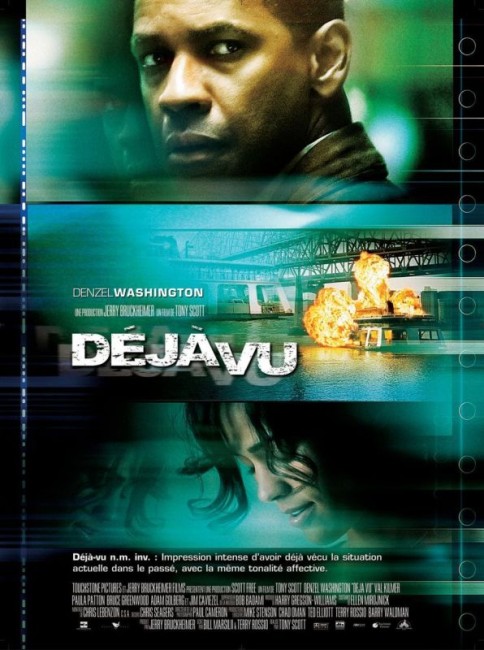 New Orleans is rocked by an explosion that destroys a harbour ferry, killing 543 passengers. Investigating afterwards, ATF agent Doug Carlin determines that the explosion was caused by a bomb. Doug also puzzles over a body recovered from the water that appears to have been killed two hours before the explosion. This is found to be a Claire Kuchever and, in examining Claire’s apartment, Doug finds that her vehicle was aboard the ferry. Doug is then brought aboard a special FBI operation where a group of scientists are examining what happened using technology that is able to view events from any point four days and six hours in the past. Doug gets them to monitor Claire, certain that the bomber will contact her. As they watch, Doug realises that the barrier between the past and present can be penetrated. He persuades the scientists to send a message back through time to alert himself and prevent the bombing, but this is picked up by his partner who is then killed by the bomber. Doug decides that the only way to save Claire’s life and prevent the bombing is to be able to travel back through time himself.

Deja Vu – which should not be confused with some twenty other films also called Deja Vu, including Deja Vu (1985), which involved Jaclyn Smith in a cross-time romance – comes from action producer Jerry Bruckheimer, best known for loud and noisy action films like Armageddon (1998), Gone in 60 Seconds (2000), Pearl Harbor (2001) and occasionally more quiet fare like tv’s goriest drama CSI: Crime Scene Investigation (2000-15) and its spinoffs.

The director was the often erratic Tony Scott, who has made a number of films for Jerry Bruckheimer, including Top Gun (1986), Beverly Hills Cop II (1987), Days of Thunder (1990), Crimson Tide (1995) and Enemy of the State (1998). Tony Scott premiered with the chic vampire film The Hunger (1983) and made other genre outings such as the psycho-thriller The Fan (1996) and the quasi-fantastical gonzo bounty hunter biopic Domino (2005). Tony was the brother of the better known Ridley Scott and shares Ridley’s fascination with stylistic effects. Tony’s films of the 1990s in particular contained an amazing array of dense aural soundscapes, split screens, cut-up imagery, blurred camerawork, rich chiaroscuro photography and colour washes. Scott’s previous film Domino went completely mad with such visual experimentation.

In Deja Vu, Tony Scott has clearly cut down on the visual gimmicks. Deja Vu is restrained to being merely a gorgeously lit and coloured film and is the first PG-rated film that Tony Scott made since the 1980s. Scott also has a fascination with surveillance, which came to the fore in Enemy of the State, and some of the most captivating scenes in Deja Vu are those where Denzel Washington and the FBI team are watching Paula Patton and trying to track the killer. Surprisingly, for a film with the Jerry Bruckheimer name attached and being sold as an action vehicle, Deja Vu is relatively restrained when it comes to the explosions and mass destruction of most Bruckheimer films. Indeed, for the bulk of its running time, Deja Vu is almost entirely driven by its script. Scott does throw in a car chase but this comes with the unique novelty of taking place with Denzel Washington driving in the present day, while pursuing the killer as he travels down a freeway four days earlier.

For a substantial part of the film, the script – which comes from Terry Rossio who, along with his usual writing partner Ted Elliott, penned scripts for high-profile films like Aladdin (1992), The Mask of Zorro (1998), Godzilla (1998), The Road to El Dorado (2000), Shrek (2001), Treasure Planet (2002), the Pirates of the Caribbean films and The Lone Ranger (2013) – is captivating. Rossio and co-writer Bill Marsili have done their research on time travel and deal with arguments about causality and the like with some literacy. (There are similarities between Deja Vu and the previous Jim Caviezel-starring vehicle Frequency (2000), which was also about communication across time).

Alas, Deja Vu soon moves beyond science-fiction into fantasy science – about the point that Denzel Washington asks “What if it’s more than physics? Something spiritual.” The notion of creating a wormhole, which is usually sub-molecular in size despite what Star Trek: Deep Space Nine (1993-9) might think, is leapt upon to then suddenly have Denzel Washington able to be bodily transported back in time. Even here, you can give Deja Vu the latitude of imaginary science needed to get where it is going. However, in the latter half – once Denzel Washington has travelled into the past – Deja Vu becomes increasingly predictable. You can see all the elements – the ambulance, the bloodied clothes, the message on the refrigerator, the call to the ATF offices – falling into place and there are no particular surprises engendered.

The more disappointing aspect of the film are the logic gaps left in the script. Essentially, Bill Marsili and Terry Rossio have created a time paradox that has a gaping hole in it. [PLOT SPOILERS]. The climax of the film has Denzel Washington travel into the past and change the events that led to Paula Patton’s murder and the destruction of the ferry, leaving his present self to walk off arm in arm with her. This is fine, excepting for the fact that this would surely mean that a new timeline is created where the ferry disaster does not happen and Denzel Washington’s present self does not investigate the circumstances of its happening, which would then mean that Denzel does not travel back in time from four days in the future and be able to prevent the disaster. In other words, the script has created a causal paradox.

Similarly so, if Denzel’s future self travels back to stop the disaster, how does Denzel, in conducting the initial investigation into Paula’s murder, find the ambulance, bloodied clothes, evidence of her murder and receive her phone call? Because those anomalies all came out of a timeline where Denzel’s future self prevented the disaster from occurring, there should have been none of this evidence present in the timeline where the disaster does happen. You can perhaps question other curious points about the script like why an Alcohol Tobacco and Firearms agent is investigating terrorist activity and a murder scene, which should surely be the province of the police, FBI or Homeland Security.

Deja Vu is very much a film about America examining itself in the face of catastrophe. Recent cataclysmic events – 9/11, Hurricane Katrina – that stunned the American nation hang over the film like a spectre. Tony Scott had the script’s original location of New York City changed to New Orleans and the film even has a band playing tribute to the Hurricane Katrina victims in the opening scene, while the end credits reveal that many of the disaster relief teams have been co-opted into helping make the film and pays tribute to their bravery. There is no direct mention of 9/11 but it hangs there in every mention of the ferry of innocent civilians blown apart by a terrorist. (Although, to muddy the message somewhat, the central villain of the piece is an ex-marine who is trying to make a statement because he believes that his country has failed him). In all of this, you cannot help but feel that Deja Vu enacts an element of wish fantasy that digs into the pain of the American people – what if it were possible to go back in time and prevent these disasters that have so scoured the nation in recent memory?

Tony Scott’s other genre films included:- the chic vampire film The Hunger (1983); the submarine thriller Crimson Tide (1995) about the tension leading up to an outbreak of nuclear war; The Fan (1996) featuring Robert De Niro as a psychopathic baseball fan; and Domino (2005), a completely out-of-control supposed biopic of a bounty hunter that ends with some fantastic elements. Tony and Ridley maintained their own production company Scott Free Productions. The two produced the cable series The Hunger (1997), an anthology series of erotic horror stories; the psycho black comedy Clay Pigeons (1998); the mediaeval adventure Tristan + Isolde (2006); the tv mini-series remake of The Andromeda Strain (2008); the modernised Edgar Allan Poe adaptation Tell-Tale (2009); the tv mini-series remake of Coma (2012); the tv mini-series Labyrinth (2012) about the quest for the Holy Grail; and the horror film Stoker (2013).