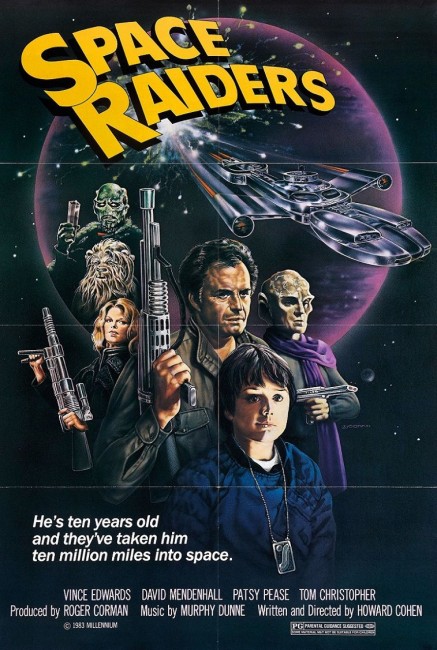 A group of outlaws conduct a raid on the Corporation planet of Procyon 3. During the shootout, a young boy Peter hides aboard a spaceship only for the outlaws to steal it. The group’s leader Hawk befriends Peter and promises that he will get him back home. They are soon pursued by various lowlifes wanting to snatch Peter for the ransom they know The Corporation will pay. Meanwhile, The Corporation sends a robotic deathship in pursuit, honing in on Peter’s id tag.

Roger Corman is a legendary director and producer, responsible for a number of classic films as director including The Little Shop of Horrors (1960) and his series of Edgar Allan Poe films beginning with The House of Usher (1960). Corman’s far more substantial output has been as a producer from the 1960s to the present at various studios including AIP, New World Pictures, Concorde-New Horizons and New Concorde. Corman is legendary for his penny-pinching practices. One of his more notorious feats was in obtaining the rights to two Russian science-fiction films – The Heavens Call (1959) and Storm Planet (1962) – and reediting all the best footage from them into several other films – Battle Beyond the Sun (1963), Voyage to the Prehistoric Planet (1965), Queen of Blood (1966) and Voyage to the Planet of Prehistoric Women (1968).

Corman was one of the first producers to jump on the science-fiction bandwagon created by the massive success of Star Wars (1977). Amid this, he produced Battle Beyond the Stars (1980), lavishing something like a ten million dollar budget on it. Like many post-Star Wars films, Corman simply uplifted the plots of other films and transposed them with robots and rayguns – in this case, offering up a space opera version of Akira Kurosawa’s The Seven Samurai (1954) and its Western remake The Magnificent Seven (1960).

Having given Battle Beyond the Stars a budget ten times more than he usually afforded films, Corman cannily made his money back by recycling material from the film. Special effects sequences from it were appearing in other New World science-fiction films for years afterwards. Space Raiders was the most blatant example of this – an entire film, just like Corman’s rehashing of the Russian science-fiction films, that was based around recycling the special effects footage from Battle Beyond the Stars and the shooting of live-action inserts to create a new story around them. (Not satisfied with that, Corman also rehashes James Horner’s score for Battle Beyond the Stars).

Space Raiders has some bad reviews from most genre studies. Seen, it is a passable time waster that doesn’t exactly engage the brain much but zips along in its own unassuming way. One only need compare it to some of the cheap Italian Star Wars copies that were being made around this era – see the likes of Cosmos: War of the Planets (1977), War in Space (1977), The Humanoid (1979), War of the Robots (1979) and Star Odyssey (1979) – to see what it could have been.

As he did in Battle Beyond the Stars, Corman borrows from the classics – in this case, the story of the boy joining the crew of roughneck pirates on an adventure is fairly much taken from Treasure Island (1883). There are all the hallmarks of a cheap Star Wars clone – cut-priced sets that consist of the same stretch of corridor used over again, cheesy alien makeups, one-dimensional B-movie villains, rugged heroes with an array of quotable quotes (Vince Edwards who gives it his all). There are some lame contemporary touches – the Star Wars cantina now becomes an intergalactic disco that advertises a singer named Patsy Clone, while we get a cameo from Corman regular Dick Miller as a holographic used spaceship salesman.