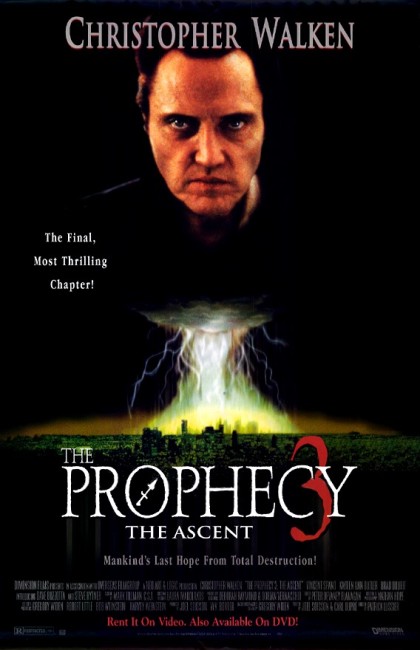 Valerie Morales’s son Danyael, born of an angel and a mortal woman, now runs a mission where he preaches his own religion that we live in a universe where God no longer cares. He is shot by a blind zealot but makes a complete recovery from death in the morgue. Both Gabriel and the dark angel Zophael come pursuing him, Zophael wanting to tear out Danyael’s heart and Gabriel attempting to protect him. As Danyael flees, he comes to learn of his intended fate as the one who will save Earth from obliteration by Pyriel, the angel of genocide.

The director this time out is Patrick Lussier, who had worked as editor on all of Wes Craven’s films since Wes Craven’s New Nightmare (1994). The Prophecy 3: The Ascent was Patrick Lussier’s directorial debut and he subsequently went onto make the Craven-produced Dracula 2000 (2000), which he later expanded into a series with the back-to-back filmed Dracula II: Ascension (2003) and Dracula III: Legacy (2005), and other films like White Noise: The Light (2007), My Bloody Valentine (2009), Drive Angry (2011) and Trick (2019), as well as the script for Terminator Genisys (2015).

As he demonstrated in Dracula 2000, Patrick Lussier is a style-driven director who is sometimes thin on substance. He certainly makes The Ascent the most directorially stylish of the Prophecy films with slam editing cuts, double exposures, half-focus and flashes of light, constantly creating a subliminal presence. Occasionally, hiding in there are some imaginative touches – the image of Vincent Spano licking a corpse’s corneas to recall their last image; and his trick of making people see that a napkin is a $50 bill or that he is holding up an FBI id card.

Disappointingly, this is a sequel that lacks the ornate dialogue and grandiose, challenging concepts of angels warring over Heaven of its predecessors – it is merely a schematic chase movie with the pretext of the angels trying to kill the cherubim child. The climax of the film is particularly lacking – the war takes place not with ideas but with wire effects and lightning bolts, before arriving at a maudlin ‘nice’ wrap-up where Christopher Walken departs in glowing doves of light and the heroine is revived from the dead. It feels like a cop-out ending.

Surprisingly, Christopher Walken is back as Gabriel, the one thread of continuity between the first three Prophecy films. Alas, Gabriel is now the good guy angel and a much weaker presence than he was in the other two films. Moreover, Patrick Lussier for some reason dresses Gabriel as a derelict and gives Christopher Walken a long, unkempt (and very unconvincing) wig.

Disappointingly, this time there is none of the running humour with the people Gabriel raises from the dead to act as his assistants and Christopher Walken is notably missing in any of the wry dialogue he had in the other films. Although, Patrick Lussier does throw in the one gloriously extravagant image of Christopher Walken driving down a desert highway in an open-top convertible blowing the Last Trumpet to the accompaniment of the car radio.

One of The Prophecy 3: The Ascent‘s best elements is Vincent Spano. Spano provides a magnificently dark and intense presence. It is a threatening and undeniably charismatically sexy side of Vincent Spano that we have not seen on screen before. He is armed with some of the script’s more amusing lines – like when he threatens a pizza parlour clerk, “You answer my question or I’ll personally see you spend the next millennium chained to a damp wall wondering what it is that has been crawling up your bowels for the last 750 years.”