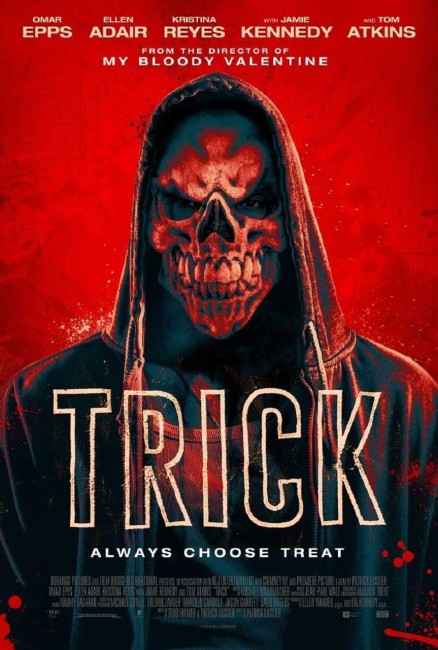 Halloween, 2015 in the town of Benton, New York. High school student Patrick Weaver, nicknamed Trick, goes crazy during a party game and kills just about everybody present before he is stabbed by Cheryl Winston. Detective Mike Denver goes to question Trick where he is held at the hospital just as Trick breaks free. Trick is shot and falls into the river, although no body can be found. Afterwards, Denver finds that Trick’s entire identity and life has been fabricated. Over successive Halloweens, Denver believes that Trick is alive and is conducting similar massacres in nearby towns. He becomes obsessed even though others say there is no evidence that the killings are connected. As Halloween of 2019 nears, Denver prepares to retire just as police find a corpse left with Denver’s name written in blood beside it. Denver goes back into action as Trick slaughters people around the town, leading him on a taunting chase.

Canadian-born Patrick Lussier began in the industry as an editor, cutting almost all of Wes Craven’s films from the 1990s. Lussier made his directorial debut with The Prophecy 3: The Ascent (2000) and then went onto the Wes Craven presented Dracula 2000 (2000). This was followed by a host of other horror films, including Dracula II: Ascension (2003), Dracula III: Legacy (2004), White Noise: The Light (2007), the remake of My Bloody Valentine (2009) and Drive Angry (2011), while Lussier also co-wrote the script for Terminator Genisys (2015). Here Lussier co-writes with Todd Farmer who also wrote the scripts for Jason X (2001), The Messengers (2007), My Bloody Valentine and Drive Angry. (Farmer who can also be spotted in an acting role as the bald-headed deputy).

Trick didn’t get many good reviews but it immediately got a hold on me from its opening scene where the title character goes crazy at a Halloween party and brutally slaughters just about everybody present with a knife. The sequence leaves you stunned for the ferocity and gore-drenched enthusiasm with which Patrick Lussier stages it. This is followed by the violent escape from the hospital and several subsequent scenes as we progress through the years to the present and others are attacked on Halloween. There is a fine scene amidst this as Omar Epps tries to save FBI agent Robert McKay who is caught in a weighted trap that beheads him, while also slicing off the fingers of Vanessa Aspillaga as she tries to free him.

In an era where horror has become safe and mainstream, where content is specifically marketed to PG-audiences, you have to applaud Patrick Lussier for launching in with a fearless go-for-broke enthusiasm. On the other hand, the film never sustains this initial ferocious pace past the first 25 minutes. The rest of the show has Omar Epps as one of the obsessed cops you usually get in action films pursuing a cold case that everyone around him is telling him to give up on. It is not quite the slasher film that is was pegged as being – Lussier only occasionally gets back to teens being killed and mostly focuses on the games between cop and killer interspersed with a series of occasional death traps for the deputies.

Trick is a horror film that pays homage to what went before, particularly in the casting. There’s genre veteran Tom Atkins who notedly also appeared in another classic work about Halloween masks – Halloween III: Season of the Witch (1982). There is also a near-unrecognisable Jamie Kennedy – famous for his role in Scream (1996) and sequels as the horror movie fan explaining the rules of the genre – who appears as a doctor.

What makes Trick interesting is that it is also deconstructing the slasher film (see Slasher Films). In Halloween (1978), we had an escaped killer but the film kept amplifying his stature by having Donald Pleasance’s Dr Loomis calling him evil and his making seemingly supernatural returns from the dead. In the Friday the 13th sequels, Jason’s constant returns from the dead – revived by electrical bolt and psychic powers, inhabited by a body-hopping parasite – increasingly turned a character that started as a regular human into a boogeyman.

Trick overturns that idea and has Omar Epps’ detective ready to believe that Trick has some supernatural power before it is eventually revealed [PLOT SPOILERS] to be a secret organisation of people who are all wearing the mask. This is an interesting idea, although one that feels underdeveloped – I kept wanting to know more about how such a group of people came together (even before the first murders occurred it would seem) and are organised.