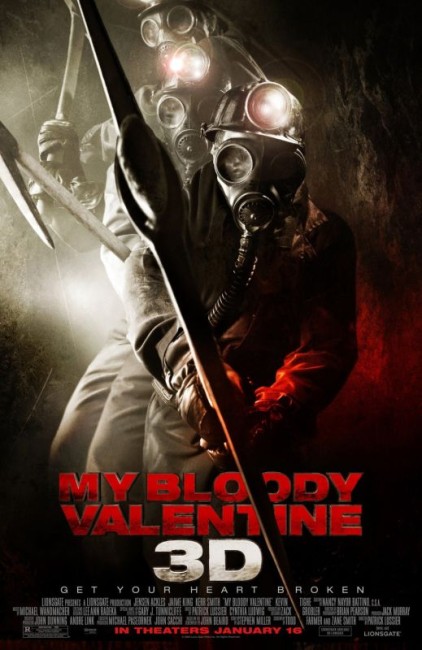 aka My Bloody Valentine 3D

Harry Warden lies in hospital in a coma, the sole survivor of a mine cave-in in Harmony, Pennsylvania. People suspect that Harry killed his fellow miners with a pickaxe. On Valentine’s Day, Harry emerges from his coma and slaughters everybody at the hospital. A group of teens venture down into the mine for a party but Harry appears in mining gear and slaughters most of the group with a pickaxe before the sheriff’s department arrives and shoots him. Ten years later and Tom Hanniger, one of the survivors of that day, returns to Harmony after a long absence. Tom has inherited the mine after the death of his father and is planning to sell it, much to the upset of the locals. He meets up with Sarah Mercer, his girlfriend from ten years earlier who is now married to the sheriff Axel Palmer. At the same time, it appears that Harry Warden has returned from the dead and is killing once again.

The original My Bloody Valentine (1981) was a Canadian-made slasher film designed to copy the popularity of the then-recent successes of Halloween (1978) and Friday the 13th (1980), similarly playing on a holiday date in its title. The original concerned a town where a Valentine’s Day dance is about to be held for the first time since a mining disaster twenty years earlier, only to stir up a killer dressed in mining gear and a gas mask who stalks a group of teens as they hold a party in the mines. Although marginally better than some of the other entries in the slasher genre, My Bloody Valentine 1981 was a negligible effort that would probably still be forgotten were it not for the modern fad for remakes of 1970s/80s horror films where even nonentities like Toolbox Murders (1979) and Prom Night (1980) are being resurrected.

A sign of just how overcrowded the trend has become can surely be evidenced by the fact that My Bloody Valentine was not able to be released on February 14th of 2009 as was originally planned due to the fact that out of the three Friday the 13th’s in 2009, the Friday the 13th remake chose the 13th of February as its release date and the producers of My Bloody Valentine were forced to release their film a month earlier rather than the following day, feeling that they could not compete against Friday the 13th at the box-office over the same weekend.

The surprise about My Bloody Valentine 2009 is just how faithful it is to the original, which was a throwaway slasher film of no particular distinction. The producers/writers of the remake could have done what the people behind Toolbox Murders 2003 and Prom Night 2008 did and thrown out everything except the title and made up their own film, but surprisingly the remake keeps everything from the original, including the mine setting and the love triangle at the heart of the story, even the names of the central characters.

In fact, My Bloody Valentine 2009 could easily act as a sequel to the original. The original told the story of Harry Warden and was set several years later as the teens held a party in the mine; while in the remake Harry Warden and the party in the mine several years later constitutes the prologue to the film and then everything flashes forward ten years to show the characters coming back to confront the events of the past just as though it were a sequel.

One odd note is that while the remake has the heroine unable to decide which of the two leading men is the killer, the one she eventually does decide upon here is the reverse of the one revealed to be the killer in the original. The other thing about the remake is that the Valentine’s Day date is of no particular significance, other than a few bloodied hearts and chocolate boxes left around by the killer – in the original, the killer killed because the crucial disaster occurred on Valentine’s Day and the town decision to hold a Valentine’s dance stirred everything up again.

The one big novelty selling point of My Bloody Valentine was that it claimed to be the first horror film shot in 3D. This is an untrue claim – such a distinction was held by House of Wax (1953) 56 years earlier. My Bloody Valentine however was the first horror film shot in the new Real-D process. Real-D is 3D process that is being pushed in a big way by some studios in the last few years as a means to boost flagging cinema tickets sales. There have been a number of films shot in the process, something that took off astronomically after the success of Avatar (2009).

I have voiced elsewhere my lack of enthusiasm about Real-D being held up as the future of cinema (with some thousands of theatres worldwide having their projectors retrofitted). Technical innovations in the process aside, Real-D has not moved anywhere beyond what 3D was in the 1950s – requiring audiences to wear a pair of cheap mass-produced stereoscopic glasses and seeing through them (as long as one’s eyesight is focused properly) as a few images pop out of the screen. Crucial question remains unanswered. Ask oneself, in a period where the entire world is in economic downturn, is it reasonable to expect people to shell out as much as an extra five dollars above the existing ticket price to be able to watch out-of-focus things pop out the screen? And to do so enough to make these films into the big hits they need to be to justify the cost of fitting the projection systems?

My Bloody Valentine 2009 represents surely the worst aspects of both the modern horror remakes and 3D revival fads. One thing can be counted on is that did My Bloody Valentine not come with the selling gimmick of the 3D fad, it would have added up to no more than a tatty direct-to-dvd release. The modern horror fad has pushed gore to new extremes, while the worst 3D films are only about throwing novelty items out of the screen into audience’s laps. The entire film seems premised around pickaxes being swung at the screen, the killer frequently bending and shining his miner’s lamp into the camera, and especially the serving up of gore effects out into our faces – hands dripping with blood; pickaxes impaling people in the head and popping out the other side with eyeballs hanging off; a novelty shot where Tom Atkins gets a pickaxe impaled up through his jaw and out his mouth and then has his entire jawbone ripped off and flung out into the audience; another shot where a girl has a shovel hammered into her mouth, causing the top of her head to slide off towards the screen. Even after the end credits have run, the killer turns up and looks down into the camera, swinging his pickaxe and causing the lens to shatter.

Although the three leads perform competently, there is almost nothing to the film other than providing these gory despatches at regular intervals. Patrick Lussier’s direction is crude and styleless. The point that My Bloody Valentine slides from crude to totally trashy is a sequence where Lussier contrives to throw together a scene involving a trucker (screenwriter Todd Farmer) making illicit videotapes of the woman (Betsy Rue) he is having sex with in seedy motel, she running through the scene waving a gun while fully frontal naked, both then being killed, along with a dwarf motelier (Selena Luna) who is impaled against the ceiling by the killer. The end revelation of the killer’s identity and split personality is typical slasher movie psychology ie. contains nothing that bears any resemblance to real world human psychology.