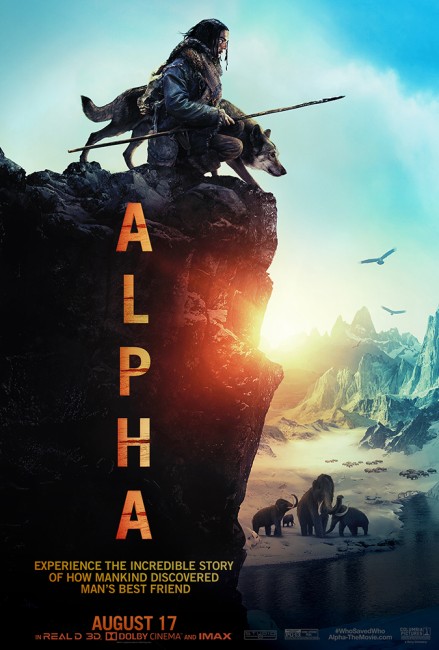 It is 20,000 years ago in Europe among the prehistoric Solutrean people. Keda is the son of the tribe’s chief Tau but continually fails in his struggle to the master the ways of hunting. While out on a hunt, Keda is dragged away by a mammoth and thrown over the side of a cliff where he is left trapped on a narrow ledge halfway down. The others of the tribe persuade Tau that they cannot reach Keda and that he must be abandoned. Keda however is saved when a flash flood washes him away. He sets out to make his way back to the tribe. He is forced to hide in a tree after being attacked by a pack of wolves. In trying to drive them off, he injures one of the wolves and then nurses it back to health. The wolf, which he names Alpha, joins him as he treks back to the tribe’s home. A companionship grows between the two of them as they face hardships and perils together.

The twin Hughes Brothers, Allen and Albert, started out as directors making films about ghetto/gangsta life with the likes of Menace II Society (1993) and Dead Presidents (1995), before turning to documentary with the fascinating American Pimp (1999). Their most high-profile work was the disappointing Jack the Ripper film From Hell (2001), followed by the post-holocaust film The Book of Eli (2010). For Alpha, Albert Hughes directs solo without his brother for the first time.

Alpha is another of these infrequent revivals of the genre. We have not had a caveman film on screens since Roland Emmerich’s 10,000 B.C., which was widely ridiculed. Similarly, an attempt to revive Clan of the Cave Bear as a tv series in 2015 failed to go anywhere. There is the sense, one suspects, that people regard the prehistoric film as either hoary or cheesy. Or perhaps it is the difficulty of presenting a story (or audiences lacking a patience) with a film where all dialogue has to be relayed in either grunts and hand signals, subtitles (as here), via a narrator or else having cavemen improbably speaking English.

This may well be why Alpha dithered around in release. Originally shot in early 2016 in Canada and Iceland, it was intended for release in September of 2017 but this was pulled. For the better part of the next year, it bounced around multiple release dates. In the interim it also underwent a name change from the originally announced The Solutrean to presumably the more recognisable and/or pronounceable Alpha.

On the basis of the Hughes Brothers’ previous big-budget films and the behind the scenes shufflings, which usually betoken a film with problems, I didn’t have any high expectations of Alpha – probably nothing more than another 10,000 B.C.. That said, I ended up being quite pleasantly surprised by what Albert Hughes does. He has solved the problem of making the prehistoric drama interesting by employing an arsenal of modern visual tricks to give the story life. At heart, Alpha is nothing more than a standard boy and his dog film like Lassie Go Home (1943) or Old Yeller (1957). However, Albert gives it life by allowing it to take place in an extraordinarily vibrant visual world.

No other prehistoric film has managed to work in such a visually kinetic way, Albert has created the prehistoric world as one of hyper-real beauty where the backgrounds have been digitally touched up with waterfalls, vast plains, the stars above seen in a crystalline clarity and the like. It at once seems artificial but also one that opens the primordial landscape up with considerable beauty. Particularly captivating is the opening hunting scene where Albert borrows more than a few leaves from Zack Snyder and 300 (2007) in directing in a series of sped-up/slow-down moves, most breathtakingly the scene where Kodi Smit-McPhee is dragged away on the tusk of a mammoth and flung over the side of a cliff. It is essentially the prehistoric film having been reinvented in a series of dynamic action film moves.

Perhaps the most jaw-droppingly showoffy scene that Albert Hughes pulls is one where Kodi Smit-McPhee is trapped under the ice and struggles to get free at the same time as Alpha runs along on top trying to get to him – a scene where Hughes briefly horizontally bifurcates the screen, giving us a view of Kodi trapped underneath the ice on the bottom and the wolf running along atop in the upper half.

The film does come with an anthropological basis in the Solutrean tribes, an advanced tool-making people who lived in the areas of modern France and Spain in the Palaeolithic period around 20,000 years ago. (They are named after the initial site of their discovery in Solutré in France). There has been a persistent fringe theory in some anthropological circles that the Solutrean were the ones who crossed the Siberia-Alaska landbridge and colonised North America, although this idea has now been discredited by DNA evidence. One had the suspicion that Albert Hughes was going to buy into the same wonky fringe anthropology that allowed Roland Emmerich to show mammoths as pack animals used in constructing The Pyramids in 10,000 B.C. but this does not prove to be the case and Alpha remains situated in Europe. The end of the film does leave us with the implication that we just saw the moment where prehistoric man first befriended and tamed the wolf and set it on its long evolutionary course to become the modern dog.