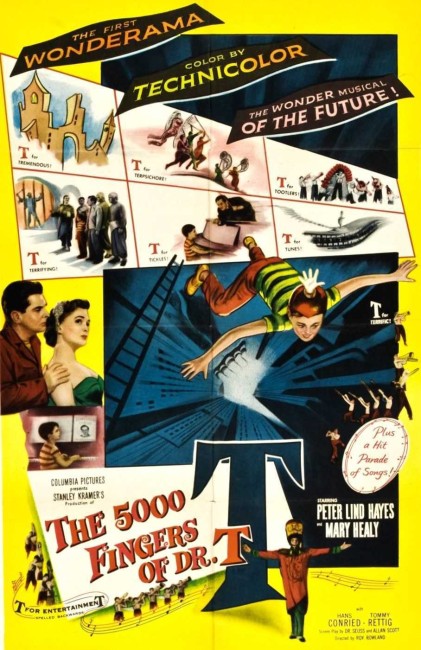 The bane of young Bart Collins’ life is his autocratic music teacher Dr Terwilliker who is constantly remonstrating Bart for not practicing enough. Falling asleep at the piano, Bart dreams that he is in Terwilliker’s Happy Hands Institute, along with other boys who have been made prisoner and are being forced to play Dr Terwilliker’s 500-seater piano at the Institute’s opening the next day. Bart also discovers that his mother is now under Dr Terwilliker’s hypnotic influence and that Terwilliker is planning to marry her at the opening ceremony. With the help of the friendly plumber August Zabladowski, Bart attempts to save his mother and set the other pupils free.

It has been said that Dr Seuss – in reality Theodore Seuss Geisel (1904-91) – is one of the most popular and well-read of all children’s authors. Seuss, who was previously a syndicated cartoonist, began publishing his famous children’s books with And To Think That I Saw It On Mulberry Street (1937). However, Dr Seuss would not gain his name though until the 1950s with books like The Cat in the Hat (1957) and Green Eggs and Ham (1960). The common feature of Dr Seuss’s books was their nonsense rhyming scheme. In his books, Dr Seuss accepted a challenge to write using the most simple and common words in the English language, creating a simple motif wherein basic phrases and rhymes are repeated in endless variations.

At the time he contributed the script for this bizarre children’s fantasy, Dr Seuss’s greatest successes – the likes of The Cat in the Hat books, Horton Hears a Who! (1954), How the Grinch Stole Christmas (1957) and Green Eggs and Ham would still be a few years ahead. Seuss however had had some Hollywood experience, having developed Wartime propaganda shorts under Frank Capra, as well as having written cartoon versions of Horton Hatches an Egg (1942), And To Think That I Saw It On Mulberry Street (1944) and Gerald McBoing-Boing (1951). The 5000 Fingers of Dr T was produced by Stanley Kramer, several years before Kramer become well known for his big message films – The Defiant Ones (1958), On the Beach (1959), Inherit the Wind (1960) and Judgment at Nuremberg (1961).

The 5000 Fingers of Dr T was not a financial success at the time of its release, nor was it readily available on video/dvd for a number of years. It is not hard to see why it wasn’t a success – it is rather subversive stuff with its anarchic, even Oedipal, child’s revenge fantasy, and containing the kind of black humour that Roald Dahl would specialise in. In fact, The 5000 Fingers of Dr T was the first screen attempt, outside of occasional versions of Alice in Wonderland (1865), to convey the delirious absurdism of the children’s tale. The later adaptation of Dahl’s Willy Wonka and the Chocolate Factory (1971) draws much upon The 5000 Fingers of Dr T.

The production designers have gone completely wild – at times, The 5000 Fingers of Dr T is like a giant Technicolor remake of a German silent film like The Cabinet of Dr Caligari (1919) with mazes of hallways all in sharp, white linear lines; giant red ladders that reach hundreds of feet up into thin air; and, of course, the huge twisting 500-seater super-piano.

The choreography is equally dazzling, notably with the marvelous dungeon orchestra including the likes of antler bells that are rung by strangling the wearer, cymbals that are painted with targets and rung by being shot with air pistols, a horn that has three players blowing into one tube, maraca boxing gloves, violins built wrapped around their players’ necks, players encased inside tubas and drummers dancing on their drums. When it comes to the storytelling, the film is slightly more ponderous and the so-so musical numbers slow it down but who’s complaining.