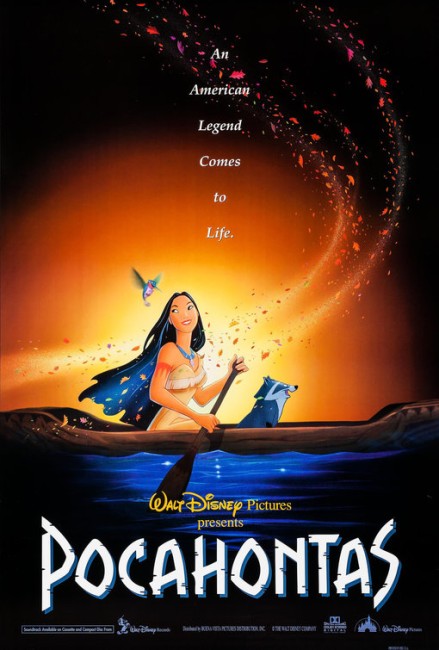 In 1607, a group of British colonists arrive in what is today Virginia aboard the Susan Constant, captained by John Smith. Their arrival is watched by the Indian girl Pocahontas. Pocahontas becomes curious about the new arrivals. She soon meets Smith and the two are attracted. The British governor John Ratcliffe is hungry to find gold. However, when Ratcliffe shoots at the Indians, thinking they are trying to prevent him from finding the gold, both sides start preparing for war.

As was much touted in their publicity material beforehand, Pocahontas was the first Disney animated film based on actual historical events. In actuality, the film’s connection to historical events makes Pocahontas as about as realistic a version of history as the Pecos Bill story Disney told in Melody Time (1945).

The legend of Pocahontas came about in the 1620s when John Smith told of how a native girl saved him from being clubbed to death and the tale went on to achieve the status of a legend. The historical truth of the story is that Pocahontas (or Matoaka) was only around 10-12 years old and John Smith was between ten and forty years older than she, which at the very least makes any relationship between the two of them a paedophile one upon Smith’s part. (Much has been suggested that this may not have been a romance so much as Smith having forced himself on her). Smith was also a mercenary and has been described as arrogant. There is considerable speculation that such an incident may never even have happened, that he made it up.

Of course, what the Disney version also never mentions is how the English later took Pocahontas prisoner for two years and as condition of her release, she agreed to marry English tobacco merchant John Rolfe. Nor does the film mention that within only a matter of years, the English settlers had decimated most of the Powhatan tribe and confiscated their lands.

In the 1990s, Disney came under an extraordinary amount of criticism from the PC factions – with Aladdin (1992) being criticised for its anti-Arabic lyrics and The Lion King (1994) for its purported racial characterisations, even The Hunchback for Notre Dame (1996) for disrespecting French culture.

Pocahontas is what happens when Disney end up trying to appease the politically sensitive – and the results are sad. Pocahontas is so PC on can almost see its head touching the ground with all the bending over backwards. It attempts to cast a minority people in a favourable light; it appeals to New Age and native spirituality; it is anti-White Men and anti the corrupting effects of Western civilisation. The film certainly employs real Native American actors in many of the parts and even had Indian activist Russell Means on a PR junket, promoting the film’s historical accuracy. (Despite which, a number of prominent Native American activists and tribes issued an open letter condemning Pocahontas for historical inaccuracy and stereotyping of Indian peoples).

The film supporting all of this is routine Disney. The animation is competent but little of it stands out in any memorable way – certainly, there are none of the awe-inspiring moments that there had been in other Disney films around the time such as the three-dimensional ballroom dance in Beauty and the Beast (1991) or the christening of Simba in The Lion King. Mel Gibson does a passable job as the voice of John Smith, although the way the character is drawn with a square-jawed solidity is forgettable. However, Irene Bedard’s Pocahontas is excellent. She is cast and drawn in noble poses – the obvious desire on the part of Disney to create a strong female character – and emerges with considerable strength.

Disney made a superior direct-to-video sequel Pocahontas II: Journey to a New World (1998). Pocahontas also makes a cameo appearance as one of the Disney princesses in Ralph Breaks the Internet (2018). A much more impressive telling of the Pocahontas-John Smith story came in Terence Malick’s exquisite The New World (2005).