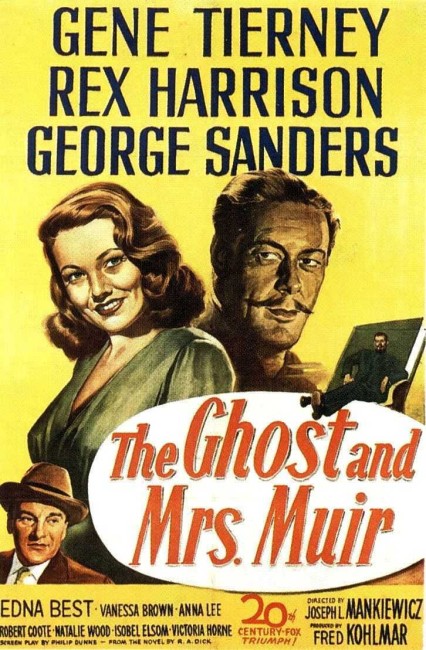 Widow Lucy Muir rents a house on the Cornwall coast. The estate agent tries to dissuade her from renting the house because it is supposed to be haunted, but Lucy determinedly moves in with her daughter Anna. She soon meets the ghost of its previous owner, the blustery sea captain Daniel Clegg. He wants her out of the house but a friendship and compromise soon grows between the two. When Lucy loses all her money, Clegg helps her out by dictating to her an unexpurgated account of his seafaring life, whereupon she sends it to a publisher and it becomes a best-seller. However, when Lucy meets the smooth, handsomely charming Miles Fairly and is charmed by him, Clegg bids a sad farewell, wiping all memory of himself from her mind.

The period around World War II and immediately after was a time of effervescent afterlife fantasies. This era produced the likes of Here Comes Mr Jordan (1941), A Guy Named Joe (1943), It’s a Wonderful Life (1946), A Matter of Life and Death/Stairway to Heaven (1946) and Portrait of Jennie (1948), among many others. The clear appeal of these films lay in the overwhelming need to find some gentle but nondenominational and ecumenically vague assurance of the afterlife after the great losses of life that came with the War. The Ghost and Mrs Muir was the very best of these light fantasy films to come out of the 1940s.

The film takes a long time to get started – the first half is a little stolid. However, the relationship that grows between Rex Harrison and Gene Tierney is wonderfully prickly and sparring. Gene Tierney has a marvellously prim composure, which is contrasted with Rex Harrison’s blustery crustiness, which can also be clearly seen to hold a decency inside. And after the introduction of the smoothly urbane George Sanders, The Ghost and Mrs Muir becomes a quite beautiful film.

There are so many wonderful pieces to the film – the knowing nod that Mrs Fairly gives when she sees Gene Tierney’s shocked expression “I think I understand – this isn’t the first time this has happened, you see”, or when Tierney starts spouting the colourful language of a sailor (which has amusingly been censored and tamed down by the studio code anyway). There is something incredibly affecting to the moment where Rex Harrison bids goodbye to Gene Tierney. Or little touches like the way that director Joseph L. Mankiewicz shows the passage of time – the slow erosion of the name of Anna Muir carved into the pillar by the cliffs. It is topped off by a wonderful, sweeping score from Bernard Herrmann. The ending rates as one of the saddest and most moving one could possibly see in a film.

The film later became the basis of a tv series The Ghost and Mrs Muir (1968-70) starring Edward Mulhare and Hope Lange in the respective title roles. Unlike the film, the tv series seemed pitched more as a 1960s light fantasy sitcom a la Bewitched (1964-71) and I Dream of Jeannie (1965-70). The show lasted two seasons. In the 1990s, a remake of The Ghost and Mrs Muir was at one point announced to have starred Sean Connery and Julia Roberts, although this never emerged.

Director Joseph L. Mankiewicz went onto make other classic works such as All About Eve (1950), The Barefoot Contessa (1954), Guys and Dolls (1955), Cleopatra (1963) and Sleuth (1972), and with one quasi-venture into the horror genre with the Tennessee Williams adaptation Suddenly, Last Summer (1959).