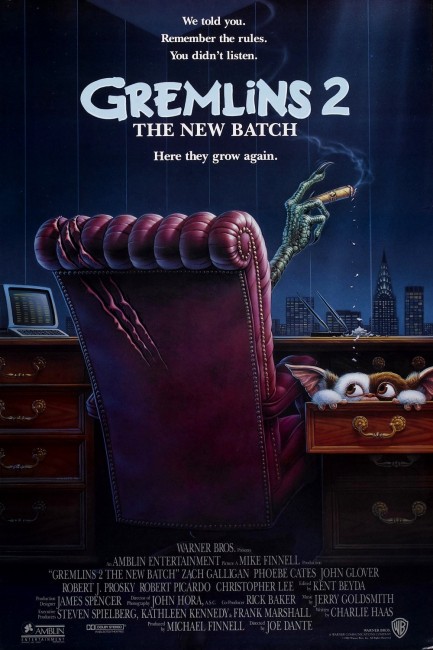 After the old Oriental curio dealer dies and his shop is brought out by property developer Daniel Clamp, Gizmo is found by the genetic researcher Dr Catheter and taken to his laboratory in Clamp Towers in Manhattan. Billy Peltzer is working in Clamp’s ad department, while living with and engaged to his girlfriend Kate who is working as a Clamp Tower tour guide. Billy finds Gizmo and rescues him from the laboratory. While hidden in Billy’s desk, Gizmo is sprayed with water and inadvertently manages to reproduce a legion of other gremlins. After they drink experimental potions in the lab, the other gremlins are transformed into an alarming array of strange and exotic creatures that proceed to wreak havoc throughout the tower.

Gremlins (1984) was a runaway success that became the highest box-office grossing film of its year in many countries. Director Joe Dante, whose career track since Gremlins was decidedly uneven, returned along with most of the cast and many of the technical crew from the original with this sequel. Gremlins 2: The New Batch is certainly much higher budgeted, although it failed to repeat the box-office success of the first film.

Gremlins 2: The New Batch tries not very successfully to get around the fact of being essentially the same film as its predecessor. It adds a few inventive twists and ups the scale of things, introducing more technically elaborate and a wider variety of gremlins, but never manages to disguise this single fact. It is eventually done in by its own silliness. The first film stripped almost anything resembling a plot away to the point that it was just a string of gremlins gags.

One would think that there would be no ceiling on how far over-the-top a film like this could go but Dante proves that there is. Here Dante allows the gleeful malice of the first film to go totally gonzo – he turns Gremlins 2: The New Batch into an anything-goes screwball comedy. When it comes to scenes with the gremlins interrupting the screening of the film and a theatre manager played by Paul Bartel having to call upon wrestling mega-star Hulk Hogan sitting in the audience to threaten them into submission; or gremlins slaughtering film critic Leonard Maltin as he is in the process of dismissively reviewing the first film; and Bugs and Daffy playing about over the credits – there is no sense of reality to the film anymore.

Rick Baker’s gremlins are technically ingenious and far more vicious than ever before. One also gets the feeling that the film’s technical flourish has gotten in the way of the gags. Some sequences – the gremlins filling an entire lobby singing New York, New York, the spider gremlin, one that shoots electric bolts, another turning into a stone gargoyle – seem only there so that the technical people can show off. There is nothing in this film that comes with the giggly malicious, slam-bang farcical pace that the first film did.

Moreover, while the first film bit into the underside of the wholesome Family Values of Spielberg and E.T. – The Extra-Terrestrial (1982), this seems to have brought into them. There is a mild and rather clumsy degree of satire aimed at big business – John Glover’s silly performance is intended as a parody of Donald Trump (back when he was a property developer rather than US President) – but the film, after supposedly waving its fist at it, ends with Billy buying into it and allowing himself to be appointed as design consultant to Clamp’s redevelopment of Kingston Falls. It is harder to think of a more conservative reversal of the malice that the first film so enthusiastically celebrated.

A third film has been announced in the 2020s, while there was also the animated tv series Gremlins: Secrets of the Mogwai (2022- ).

Director Joe Dante has also made:– the original Piranha (1978); the werewolf spoof The Howling (1980); the third episode of the anthology Twilight Zone – The Movie (1983); Explorers (1985), probably his best film, about backyard teen inventors; Innerspace (1987), a parody of Fantastic Voyage (1966); episodes of the comedy skit anthology Amazon Women on the Moon (1987); the urban paranoia black comedy The ‘Burbs (1989); Matinee (1993), a homage to filmmaker William Castle; The Second Civil War (1997); Small Soldiers (1998), a film about warring toy soldiers that disappointingly imitated Gremlins; the toon film Looney Tunes: Back in Action (2003); the Young Adult horror film The Hole (2009); Burying the Ex (2014) about a zombie ex-girlfriend; and the Mirari episode of the horror anthology Nightmare Cinema (2018). Dante also created the delightful smalltown paranoia tv series Eerie Indiana (1991-2), and produced the genre series’ The Osiris Chronicles (1998) and Jeremiah (2002-4), as well as the film adaptation of the comic-book The Phantom (1996).