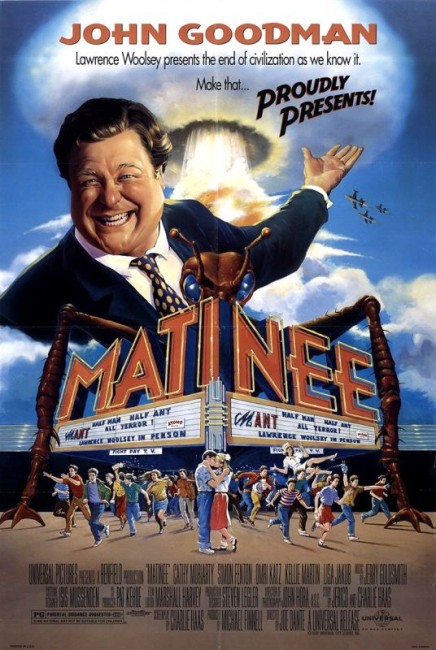 Key West, Florida, 1962. Gene Loomis is a teenager whose family has recently arrived at the military base. He is a big horror movie fan and becomes excited when he hears that movie producer Lawrence Woolsey, a master of gimmicky showmanship, is going to be appearing at a local cinema in person to promote a sneak preview of his new film ‘Mant’. At the same time, the Cuban Missile Crisis begins. Woolsey takes Gene under his wing and this becomes an opportunity for Gene and his friend Stan to take the girls they are keen on to the preview. However, when things at the screening are beset by disaster, the audience thinks that nuclear war has broken out.

Matinee shows director Joe Dante in familiar territory. His films come brim-packed (and sometimes completely taken over by) with in-jokes and references that only other science-fiction fans will pick up on – cameos from the likes of Kevin McCarthy, Famous Monsters of Filmland (1958-82) editor Forrest J. Ackerman, B movie legend Roger Corman, horror host Brother Theodore, Robbie the Robot, George Pal’s Time Machine and Corman stock actor Dick Miller who Dante uses like some sort of good luck charm and has cast in every single film to date. The problem with many of Joe Dante’s films is that there is often nothing else to them except their fanboy enthusiasm. The only one that went any way towards tying the fannish humour into its own story was Explorers.

Matinee is fairly much a Joe Dante film as usual. There are cameos from Dick Miller and other 1950s science-fiction movie regulars such as John Agar, Robert Cornthwaite, William Schallert and Kevin McCarthy (who plays a General Ankrum, named after Morris Ankrum, a regular actor in 1950s science-fiction films). The film is filled with a gee-whiz fannish enthusiasm – the young hero is naturally a monster movie fan and rabidly collects, like Dante himself did, Famous Monsters of Filmland magazine.

Dante conducts an elaborate recreation of a 1950s atomic monster movie, right down to the bad effects, the acting style, the deadpan lines and the lighting scheme. (The only complaint is that the film’s setting of 1962 was well past the date when the fad for atomic monster movies had died off). There is also a clip from a film entitled The Shook Up Shopping Cart that does a very funny parody of Disney live-action films.

Most of all, Matinee is a tribute to that master of gimmicky showmanship William Castle, the director/producer of films like Macabre (1958), wherein Castle offered up insurance policies against death of fright; House on Haunted Hill (1959) in which a skeleton was winched across the theatre; and The Tingler (1959) where Castle placed electric buzzers beneath the seats, all of which feature in one form or another here. There’s an hilarious opening clip that imitates one of William Castle’s self-promotional trailers, promising a film shot in Atomo-Vision and spurious claims to being based on scientific fact by scientific magazines that are whipped past the camera too fast to be seen. John Goodman gives a highly enjoyable larger-than-life performance as Woolsey/Castle.

The good news is that Matinee appears to represent a maturity upon Joe Dante’s part. While it never leaves the Famous Monsters fanboy territory that Dante has staked out behind, it is more substantial as a story than all of Dante’s other films. It is less a film about monster movie fannish enthusiasm than it is about the era the films came from. Indeed, one gets the impression it could almost be a film about Joe Dante’s own childhood. It has a nicely structured screenplay that enjoyably twists and turns through the awkwardness of asking girls out, first kisses, dealing with annoying younger brothers, juvenile delinquency, the madness that took people’s imagination during the Cuban Missile Crisis era and, of course, a love of monster movies. It is the first of Joe Dante’s films that actually touches base with the subtext of the films he loves.

Matinee also does a good job of recreating the hysteria that momentarily swept the nation at the time of the Cuban Missile Crisis – the insanity of the Duck and Cover protection, the panic in the supermarkets. There is one wonderfully playful moment where John Goodman evocatively compares a cinema to the lair of a primitive caveman – the food laid out in the nibble nook, the worn carpet like the floor of an ancient cave, the screening auditorium playing like the dark pit where the caveman paints animals on the wall to frighten and awe others.