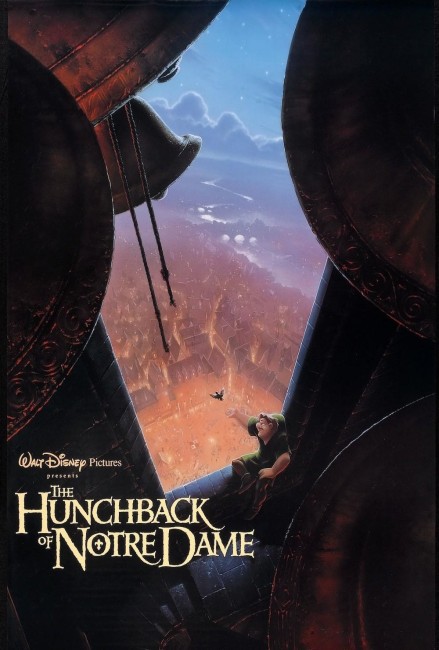 A Gypsy woman is murdered on the steps of Notre Dame cathedral. The archdeacon takes in the ugly child that she was carrying and names it Quasimodo. Twenty years later, Quasimodo, or Quasi, has grown up in the belltower with only the gargoyles for company, having been forbidden by the archdeacon to leave. Quasi defies orders and sneaks down to the Festival of Fools where he becomes entranced by the Gypsy dancer Esmeralda. The city counsellor Frollo then demands that Esmeralda be arrested and burned as a witch but instead Quasi hides her in the cathedral belltower. In anger, Frollo raises the army to storm the cathedral.

The Victor Hugo novel Notre Dame de Paris (The Hunchback of Notre Dame) (1831) is a literary classic and has formed the basis for at least eight other film adaptations. (See below). There was no doubt that this Disney adaptation would bowdlerise the story but it is still sad to watch being done.

The differences between the book and the Disney film make for intriguing comparison. In the book, the character of Quasimodo is a misshapen figure of pity, a mindless idiot who has been deafened by the bells. His love for Esmeralda is the inarticulate cry of a beast reaching out for the only kindness ever offered it. However, in the Disney film, Quasimodo is merely a slightly ugly teenager with a self-esteem problem, affectionately referred to by all as Quasi. Quasi sings about how rejected he is and comes accompanied by a clowning trio of talking gargoyles (two of whom have cheekily been named Victor and Hugo). The cathedral’s spouts become handy waterslides, while the roof and its tiles convert to a toboggan run.

In the book, the character of Frollo is a corrupt cleric – the film, in clearly not wanting to offend the Moral Minority, turns him into a corrupt magistrate. (Although the film is at least adult enough to show Frollo being tortured with sexual desire for Esmeralda). The book’s climax has Quasimodo barricaded inside the cathedral as the city militia storm it; the film turns it into a slapstick set-piece with the gargoyles chewing up stones and spitting them out as makeshift machine-gun bullets.

The book ends with the two lovers dying; in the film, everybody lives happily ever after, Quasi having learned that the world can accept him despite his disfigurement and with Esmeralda going off to true love with the guard captain Phoebus (who in the book is a handsome cad who seeks to have his way with Esmeralda while also engaged to another woman).

One aspect of the book that the film brings out – one that is usually ignored by many film adaptations – is the persecution of the Gypsies and the visit to the Gypsy undercity. The reason for this soon becomes clear. Having received an excess of protest by various offended minority groups in several of their last films – Aladdin (1992), The Lion King (1994) and Pocahontas (1995), Disney has started bending over backwards to make their films as PC as possible and the persecution of the Gypsies has clearly been included so that the film can include a message about racial intolerance. (Although in the end, The Hunchback of Notre Dame was not free from objections – it was protested against by French academics for trashing a French literary classic).

One had fairly much prepared themselves that the film would rewrite the book and tried to enjoy the film for what it was in itself, but on most fronts The Hunchback of Notre Dame proves disappointingly routine. The film was directed by Gary Trousdale and Kirk Wise, the directing team who kicked the modern Disney animation renaissance off with the fine Beauty and the Beast (1991) and would go onto make the okay Atlantis: The Lost Empire (2001). There are some very nice dimensional shots near the opening with the camera moving down on the city and weaving in between the buildings. There is at least one dazzling shot where Quasi swings down across the burning square to rescue Esmeralda. The scenes of the cathedral lit up by burning oil have beauty.

However, technical flourish should not be all there is to admire about a film and sadly to report The Hunchback of Notre Dame never engages on a crucial emotional level. One should care about the romance at the center of it but it never seems to get started. The film sets up a love triangle between Quasimodo, Esmeralda and Phoebus but this ends abruptly with Phoebus and Esmeralda heading off together and Quasi happily accepting second place. In comparison to the epic romance that almost all other film versions of the Victor Hugo mount, there is a staggering banality to such an ending.

Disney made a direct-to-video sequel The Hunchback of Notre Dame II (2002).