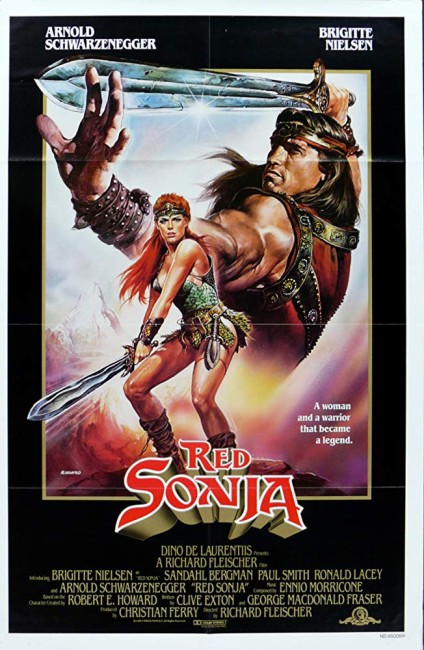 Sonja is the only survivor after her village is destroyed and her family murdered by Queen Gedren. Lying unconscious, Sonja is woken by a spirit that blesses her with great swordskill abilities. Entering a male-dominated fighting academy, she becomes the top pupil, vowing to never make love to any man who cannot best her in combat. Meanwhile, Gedren’s ambition grows and she steals a Talisman of vast and dangerous powers. Sonja’s sister, her only surviving family member, one of the women priestesses who guard The Talisman, is killed during the attack. Swearing vengeance, Sonja leaves the academy to stop Gedren.

Producer Dino De Laurentiis had had considerable success with his adaptations of Robert E. Howard’s famous barbarian creation in Conan the Barbarian (1982) and Conan the Destroyer (1984), both starring Arnold Schwarzenegger. Dino De Laurentiis, along with Arnold Schwarzenegger and Conan the Destroyer director Richard Fleischer, next turned their sights to Robert E. Howard’s second most famous creation, Red Sonja, with this film.

It is surprising that Red Sonja has become Robert E. Howard’s next most famous creation – surprising because she only ever appeared in a single Howard short story, Shadow of the Vulture (1934), where she bears little resemblance to what we know Red Sonja to be today. The story takes place in the 16th Century Ottoman empire where Red Sonya is a pistol-wielding woman seeking revenge. It is curious that she has become so popular rather than other Howard creations such as Solomon Kane, Brak Mak Morn and Kull who have each had far more stories devoted to their exploits than she ever did. Of course, with Red Sonja, Robert E. Howard was merely taking the brutish barbarism of his various male creations and giving them a sex change. However, the image of invincible, sexually dominant female warrior evidently struck a chord.

The Red Sonja we know appeared in Marvel Comics’ Kull and the Barbarians in 1973 and later Conan comic-books, where the Marvel writers transported the character of Sonya into the Hyborian age and gave her more of a fantasy origin. Her popularity grew after she was expanded out of into her own line of comic books beginning in 1977 and then into a series of six novels by David C. Smith and Richard Tierney in the 1980s. Thus it is that this film, although it credits only Robert E. Howard and not any of the others who elaborated the Red Sonja mythos, can be said to draw itself from the comics and novels more so than any Robert E. Howard story.

This film adaptation of Red Sonja is a thorough disappointment. The worst part about it is the casting of Brigitte Nielsen. The 6’1″ Danish-born Nielsen was a model who won the part after an extensive international casting call and made her acting debut with the film. Immediately afterwards, Nielsen went onto two parts opposite Sylvester Stallone – in Rocky V (1985) and Cobra (1986), then briefly married Stallone, started body-building, obtained a huge set of breast implants and became a Hollywood joke for her total inability to act. Indeed, the same year that she made her acting debut here, Brigitte Nielsen won not one but two Golden Raspberries – as Worst Newcomer (Red Sonja) and Worst Supporting Actress (Rocky V). Certainly, if Red Sonja were a silent film and she not required to open her mouth she could have gotten by, as the lithesome, cat-like grace with which she dances through her sword scenes is impressive. It’s just that when she comes to the dialogue scenes she is totally flat – she seems to be reading dialogue off a cue card and delivers everything in an inflectionless monotone.

The effect is only a patronising one. The ferocious intensity of Robert E. Howard’s creation has become a muted banality – the Red Sonja character drops a few lines about hating men and challenging them to best her in a duel, but this is quickly forgotten about and we thereafter see little evidence of her hatred. It is as though the filmmakers were unable to conceive of a strong female character who could not save the day by herself – Kalidor is always keeping an eye on Sonja like a kindly older brother and turns up to save her at every opportunity, she rarely gets out of a jam under her own steam.

Richard Fleischer created a similarly strong Amazonian character with Grace Jones in Conan the Destroyer but when he did, he seemed to also see the need to throw in a wholly unnecessary scene where she was scared of a mouse – it is as though Fleischer cannot psychologically handle the concept of strong female characters and keeps needing to undercut them, by either belittling them or as here reducing Sonja’s tough assertive independence to little more than a younger sister role. The final duel between Sonja and Kalidor where Sonja surrenders to his arms rather than fight is completely insulting to the character of Red Sonja. The cheap but entertaining Spanish-made Conan-ripoff Hundra (1983) and of course the later tv series Xena: Warrior Princess (1995-2001) were much more successful at incarnating the original conception of the tough Amazonian warrior woman that Red Sonja represented. Try and imagine a character like Xena giving into the loving arms of a male warrior rather than fight and you get an idea of just how wimpy this Red Sonja has turned out to be.

The rest of the casting is not much better. Ernie Reyes’s royal brat and Paul Smith’s buffoonish bodyguard were a major mistake. Sandahl Bergman, the female lead from Conan the Barbarian, is unrecognisable in black wig and gold mask. Ronald Lacey, memorable in Raiders of the Lost Ark (1981) a couple of years earlier, is forgettable in a throwaway role.

One wishes they could almost say that the rest of the film was good in spite of Brigitte Nielsen in the same way that Conan the Barbarian had been a good film despite the presence of Arnold Schwarzenegger. However, the dialogue is deadening and the script seems to only have been sketched on a postcard the night before – it is no more than a constructor set of Dungeons and Dragons wilderness encounters.

Two of the reasons the film is almost worth watching for is Ennio Morricone’s wonderful score, and for the impressively imaginative sets of Danilo Donati of Flash Gordon (1980) fame – giant swordsman statues over the training arena, an ochre castle in burnished gold and Oriental motifs, the unique temple designs, a giant animal skeleton as a bridge. The costumes are also richly beautiful. With so much attention paid to the sets, music and costumes – this is the best designed of Dino De Laurentiis’s Robert E. Howard adaptations – one wonders why everything else went so disastrously wrong with the story and the central casting.

A remake of Red Sonja has been announced in the late 2000s, at one point from Robert Rodriguez and purportedly with Rose McGowan in the title role, and was revived again in the late 2010s, although nothing ever emerged. There was however Red Sonja, Queen of Plagues (2016), a surprisingly good animated film that gets the character and is a much better incarnation than this.