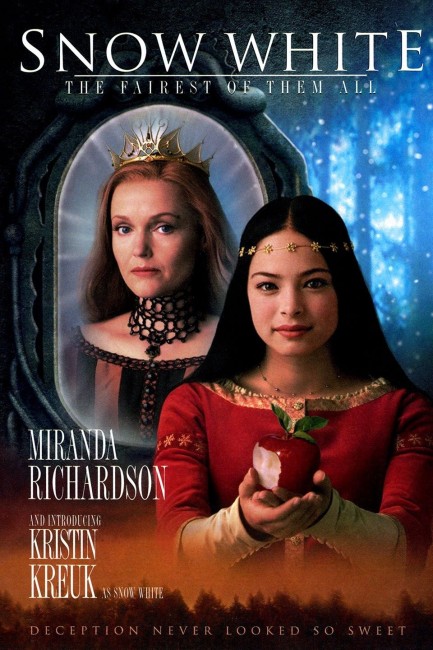 aka Snow White: The Fairest of Them All

Josephine gives birth to a beautiful daughter that she and her husband John name Snow White. However, Josephine dies shortly after. John struggles through the snowy mountains with the baby, searching for milk. He collapses but his tears succeed in freeing a magical creature frozen in the ice. In gratitude, the creature grants John three wishes. He wishes for some milk for Snow White, the return of his ‘queen’ and a kingdom. Instantly, John finds himself crowned the king of a kingdom. Unable to resurrect the dead, the Granter of Wishes instead goes to his own sister Elspeth, a hideous crone, and transforms her into a beautiful woman. Elspeth plants a shard of her magic mirror in John’s eye and is able to captivate him and make him hers. As Snow White reaches her sixteenth birthday and attracts the attention of a neighbouring prince, Elspeth, tired of John, desires the prince for herself. She flies into a rage when the magic mirror tells her that Snow White is now more beautiful than she. She orders a servant that she has accidentally enchanted to take Snow White into the woods and kill her but he is unable to do so. Snow White flees and eventually finds the company of seven dwarves who are searching for others of their number (whom Elspeth has transformed into petrified garden gnomes). However, Elspeth’s mirror tells her that Snow White is still alive and so she contrives to find a means to kill her off.

Throughout the 1990s and 2000s, Hallmark Entertainment, a production company for the US Hallmark cable channel, which in itself was a spin-off from the Hallmark greeting cards company, produced a number of mini-series and tv movies that adapt classic fantasy works. Hallmark’s other fairytale adaptations have included Snow Queen (2002) and deconstructions like Prince Charming (2000), The 10th Kingdom (2000) and Jack and the Beanstalk: The Real Story (2001), as well the semi-biographical My Life as a Fairytale: Hans Christian Andersen (2001). (A full list of Hallmark’s genre productions is at the bottom of the page).

This adaptation of Snow White came from Caroline Thompson, best known for her collaborations with Tim Burton – the scripts for Edward Scissorhands (1990), The Nightmare Before Christmas (1993) and Corpse Bride (2005). Thompson has written other works like The Addams Family (1991), Homeward Bound: The Incredible Journey (1993), The Secret Garden (1993), City of Ember (2008) and Welcome to Marwen (2018). She made her directorial debut with the adaptation of the children’s classic Black Beauty (1994) and subsequently went onto make Buddy (1997) – a film that feels like it should be fantasy but is actually based on reality – wherein Rene Russo adopts a baby gorilla.

Caroline Thompson’s scripts for Tim Burton were intelligent and had a beautifully realised sense of fantasy, albeit with a frequently dark undertow. Here Thompson does remarkable things in adapting the familiar story of Snow White. There is the fascinating character of the Granter of Wishes (whom one eventually recognises as being Clancy Brown behind the blue makeup). With his introduction, Caroline Thompson offers the first in a series of wild spins – he is (in all but name) a genii who grants Snow White’s father three wishes; when the father wishes for a queen, the Granter of Wishes then goes to his hideously disfigured sister and transforms her into a beauty, thus neatly adding a psychological undertow to the stepmother’s obsession with being the fairest in the land.

Now the magic mirror not only has oracular properties, it is an all-purpose magic tool that serves to transform the stepmother; while, in an idea borrowed from Hans Christian Andersen’s The Snow Queen (1846), a shard of the mirror is also impaled in the father’s eye enchanting him to the stepmother’s will; it even becomes a magical device that hunts people through the woods. Caroline Thompson’s ability to dig down into the fairytale is remarkable – Snow White has a little speech dismissing all the obsession with being the most beautiful in the land saying how she hates beauty, the real qualities are virtues and qualities of the heart. Elsewhere, the eating of the apple scene is turned into a seduction on the stepmother’s part.

Where the film falls down somewhat is in the introduction of the Seven Dwarves. In a clear effort to get away from the classic characterisations in Disney’s Snow White and the Seven Dwarfs (1937), these have all been named after the days of the week. Caroline Thompson ties in the song Sunday’s Child, which ingeniously allows her to assign each dwarf the characteristic they are given in the song in effect creating her own Happy, Bashful, Grumpy etc. There is a particularly cute part where Thompson has the wicked stepmother imprisoning the dwarves by petrifying them and turning them into garden gnomes (which also comes with the wonderfully icky image of Michael J. Anderson turned into a half-ceramic, half-human gnome at one point). However, the dwarf scenes quickly slip into cutsie burlesque and comic pratfalls. Moreover, the bold primary coloured costumes that each dwarf is outfitted seem too cartoony and unserious, which is a disappointment in comparison to the relative realism that the film achieves elsewhere. Also the ending where the dwarves head off saying: “Right onto Sleeping Beauty, guys” is far too in-jokey and disrupts the tenuous suspension of disbelief that we have been willing to give Caroline Thompson throughout. Mostly however, the film works up some ingenious changes on the fairytale.

It is the Wicked Stepmother who becomes the central character of the film, far more so than Snow White. The role of the wicked stepmother is perfectly suited to Miranda Richardson’s characteristically acidic sarcasm, even if she does give it an at times arch reading. Snow White is played by Kristin Kreuk, shortly before she became a regular as Lana Lang on tv’s Smallville (2001-11), where she provides a competent demureness.

One should also complement the film for the way that Caroline Thompson outfits the screen in some gorgeous colours – ochres whenever Miranda Richardson is around, the rich scarlets of roses and Kristin Kreuk’s dress to stand in for Snow White, and the forest being shown in hyper-real shades.